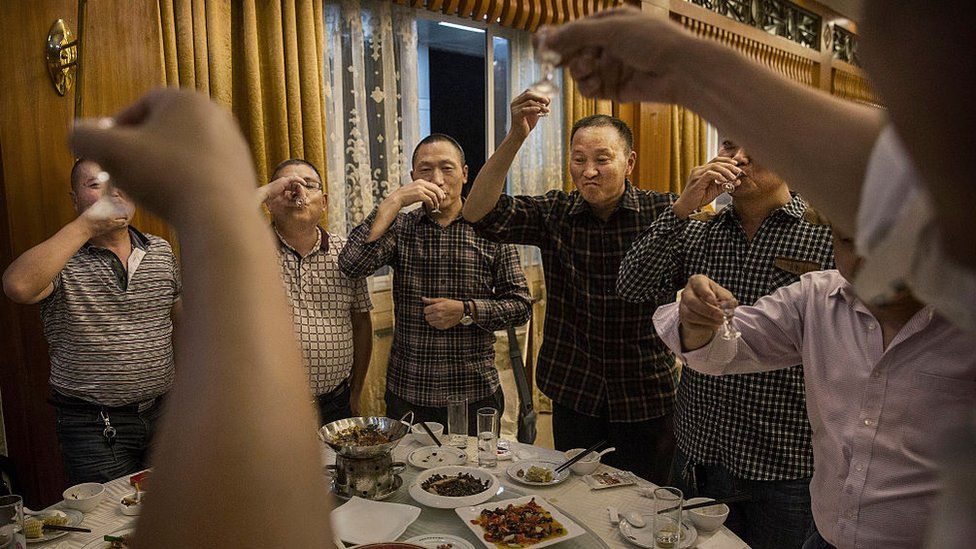 A high-profile rape allegation at Chinese tech giant Alibaba has sparked a social media storm in recent weeks about the “toxic” work culture of pressuring employees to drink at work gatherings. As public scrutiny of corporate misbehaviour grows in China, can the age-old tradition of business drinking be dropped forever?

Roughly every two weeks, Mingxi must join her colleagues after work for drinks, something she dreads doing.

After all, it’s not just about grabbing a few pints at the corner pub.

Instead, it’s often a drawn-out affair involving forced smiles with clients and formal toasting etiquette – and she never feels comfortable.

“I always worry that things can get out of hand, even though I’m quite good at holding my drink,” the 26-year-old Guangzhou-based public relations consultant told the BBC.

“Sometimes, people make inappropriate sexual jokes, and I have to pretend to find them funny.”

Mingxi is not going by her real name as she did not want her identity revealed.

Her experience is shared by other young Chinese workers who feel pressured into attending such events, in a country where building guanxi – or personal relationships – is key to securing business deals and good standing in the eyes of upper management.

China’s tradition of business binge drinking is once again in the spotlight, after a rape allegation against a senior manager at Chinese tech giant Alibaba.

According to a female employee’s 11-page account of the incident, which went viral on microblogging platform Weibo last month, she was allegedly raped while unconscious after a “drunken night” on a work trip.

Accusing her superiors of ordering her to drink excessively at a business dinner, she said she had woken up later in her hotel room naked, with no recollection of the evening’s events.

After obtaining security footage, she said that the manager had gone into her room four times during the night.

Alibaba sacked the manager and said that he would “never be rehired”.

But Chinese prosecutors have since dropped the case, with lawyers saying that the “forcible indecency” committed by the man was not a crime. Police said he would remain under detention for 15 days “as punishment”, but the investigation was closed.

Still, it has prompted a social media storm – not just about sexual harassment at the workplace, but also the “toxic” tradition of coercing employees to drink excessively while at work social events.

On Weibo, the hashtag “how to view workplace drinking culture” has since been viewed more than 110m times, with people sharing their own experiences of being pressured to drink in business settings.

‘To refuse is to be disrespectful’

There are similarities between China’s business drinking culture and those in its East Asian neighbours, where Japan’s nomikai and South Korea’s hoesik gatherings are also viewed as key to building strong work relationships.

In China, the drinks are usually consumed over lavish banquet dinners, and the potent Chinese liquor baijiu – which contains up to 60% alcohol – is a popular drink of choice.

Younger workers are expected to show respect to higher-ups by making toasts with alcohol, and any businessmen hoping to impress their clients would often do the same.

“Generally, you say very complimentary words, and express your gratitude and appreciation for having this relationship,” said Ms Rui Ma, a tech analyst who has attended numerous business dinners throughout China.

“Obviously, the more toasts you do, the drunker you get.”

Sometimes, senior managers may pressure the newer hires to help drink their share, leaving their juniors sick and reeling.

“It is hard to say no to your boss because of the strong sense of hierarchy in China,” Ms Ma said.

This is also why employees often find it difficult to reject any invitations to the dinners in the first place.

“To refuse such an invite would be seen as extremely disrespectful, and no employee wishing to advance their career would dare consider rejecting the offer,” said China market analyst Hanyu Liu from Daxue Consulting.

Mingxi said that she worries about being side-lined at work if she ever opted out of such gatherings.

“These dinners are so important that some people will use them as avenues to suck up to executives. But it’s really not for everyone,” she said.

In 2016, government officials cracked down on the practice among civil servants, banning them from touching alcohol during official duties.

But the tradition has continued in many private firms – especially when older executives are in charge – and several extreme incidents have made headlines.

In January last year, a security guard in Shenzhen died after reportedly being pressured by his boss to participate in a drinking contest during dinner after work.

His colleague, also forced to drink excessively at the same event, was hospitalised for alcohol poisoning.

According to local media reports, the security company paid out 5,000 yuan ($775, £576) to cover his medical expenses, while the boss involved quit.

Then, in August last year, a young bank worker in Beijing said he was cursed and slapped in the face after turning down a drink from a senior staff member at a banquet.

The story came to light after he wrote about it in an online chat group.

Noting how he also spotted his peers vomiting and “tipsy officials being touchy-feely with female colleagues” at the same event, he wrote: “I want to ask human resources: Does my inability to drink fall short of the company’s job requirement?”

In response, the bank confirmed that a senior employee had acted out of line, and apologised on his behalf. It added that it has issued him with a warning and docked his pay.

Given the massive outrage over these recent incidents, experts say that the days of forced business drinking may soon be over.

“Business drinking has been happening for such a long time, but the only reason the Alibaba case sparked public backlash was because of social media,” Daxue Consulting’s Mr Liu told the BBC.

“The Chinese are very connected on the internet, and just given the sheer amount of people online, they can take down people and companies very quickly.”

Amid an ongoing wider crackdown by the state on several industries, including on some of the country’s largest firms, companies will also be more careful about doing anything that risks government action.

“Taking into account recent dynamics between China’s corporate and political space, the last thing firms want is to come under the spotlight,” Mr Liu said.

After the Alibaba case broke, CEO Daniel Zhang reassured employees in a memo that the firm was “staunchly opposed to forced drinking culture”.

Shortly after, China’s anti-corruption watchdog called for an end to the “disgusting” tradition, adding in an online commentary that it would strengthen oversight of Chinese companies to combat it.