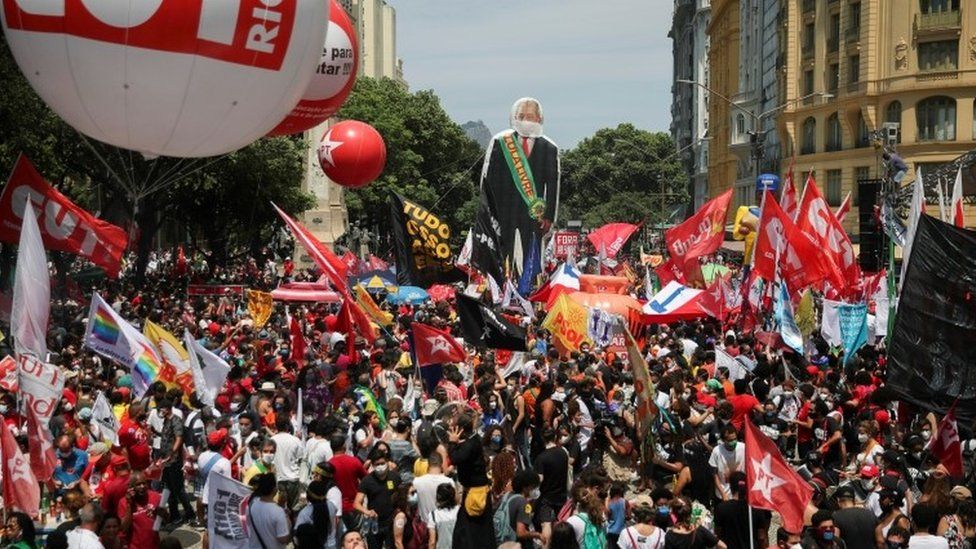 Thousands of people have taken to the streets in towns and cities across Brazil to protest against the country’s president Jair Bolsonaro.

The protests were organised by opposition parties and trade unions and fall exactly one year ahead of the country’s elections.

Mr Bolsonaro is currently falling behind in opinion polls.

Many Brazilians are upset at the president’s handling of the pandemic – more than 600,000 people have died.

Demonstrations took place in more than 160 towns and cities on Saturday.

“This president who is there represents everything that is backward in the world – there is hunger, poverty, corruption and we are here to defend democracy,” protester Valdo Oliveira told AFP news agency.

There have been more than 100 requests filed with the Chamber of Deputies to impeach Mr Bolsonaro. However, its leader has refused to follow up on them.

Saturday’s protests come after a number of rallies in support of Mr Bolsonaro last month. They were seen as an attempt to demonstrate that he can still draw huge crowds of supporters after recent polls had him trailing his left-wing rival Luiz Inácio Lula da Silva by nine percentage points.

The elections are not due to be held until next October but Mr Bolsonaro’s approval ratings have dropped to an all-time low.

A poll by the Atlas Institute suggested that 61% of Brazilians described his government’s performance as bad or very bad, up from 23% when he first took office in January 2019.