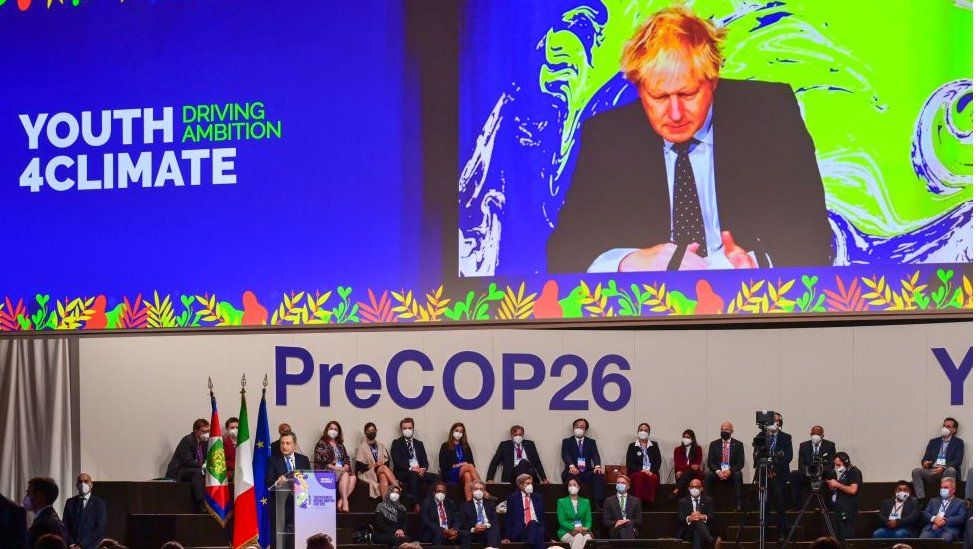 Boris Johnson says young people have every right to be angry about the state of climate change.

The UK prime minister told climate activists in Milan that they were paying the price for the “reckless actions of their elders”.

The penitent mood here was underlined by Italian Prime Minister Mario Draghi, who said politicians needed to be “whipped into action.”

Both agreed that urgent action to limit warming was now desperately needed.

For several days around 400 young activists have been working on proposals for tackling climate change here in Milan.

They’ve heard from a host of voices including Greta Thunberg who castigated politicians for dashing the hopes and dreams of young people.

She mocked their promises on climate as just more “blah, blah, blah”.

“Young people around the world are already paying the price for the reckless actions of their elders,” said Mr Johnson.

“Hundreds of millions of you are facing rising seas, failing crops, burning forests, and evermore ferocious storms, daily challenges that lead to lost opportunity. And your future is literally being stolen before your eyes.”

Some young activists had interrupted a previous speech by Italian Prime Minister Draghi.

“I saw the protesters earlier on. And frankly, you have every right to be angry with those who aren’t doing enough to stop it.”

All the senior politicians who’ve addressed this meeting say that lessons have been learned and that action on climate is now happening.

Mr Johnson pointed to the COP26 meeting in Glasgow at the start of November as a pivotal moment in tackling the issue.

If significant changes could be agreed on some key areas, COP26 would mark “the beginning of the end of climate change.”

To get there, Mr Johnson said, would need major progress on phasing out coal, ending the use of petrol and diesel cars, and planting “trillions of trees”.

A long-standing promise of cash for developing countries would have to be honoured, he said.

To signal that actions speak louder than words on climate, Mr Johnson’s government today announced that it would require businesses bidding for major government contracts to commit to achieving net zero emissions.

The UK is believed to be the first country in the world to put such a measure in place.

Their proposals to leaders include giving young people “meaningful participation” in all decision making on climate change.

They are calling for the end of fossil fuels by 2030, as well as transparent climate finance systems and responsible and sustainable tourism.

“I’m afraid that not only you, the old generation, but us will be the last generation to witness that planet as it is.”

As the young people depart the stage here in Milan, environment ministers and key negotiators are arriving, hoping to see progress on some key issues.

The aim is to clear the decks so that the presidents and prime ministers who arrive in Glasgow in November will be able to concentrate on a few major political decisions.

While there is some sense of optimism, much more “blah” will be needed if Glasgow is going to be a success.