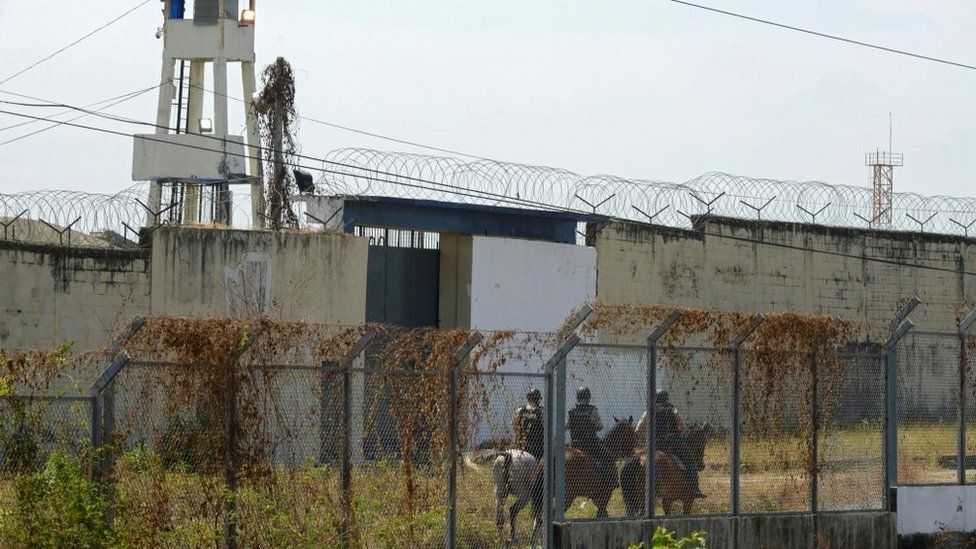 Four hundred police officers have entered a prison in the Ecuadorean port city of Guayaquil where at least 116 inmates have been killed in a gang war.

The brutal prison fight first broke out on Tuesday and officials had said on Wednesday that the jail was back under their control.

But early on Thursday, neighbours said they had heard explosions and gunshots.

Shortly afterwards, police said it was sending 400 officers back in to “maintain order”.

Ecuador’s police force posted video on its Twitter account of officers moving back into the Guayas prison complex, also known as the Litoral Penitentiary.

How did the deadly fight unfold?

The fight first broke out on Tuesday when inmates from one wing of the prison crawled through a hole to gain access to a different wing, where they attacked rival gang members.

At least six prisoners were decapitated, others were shot and some were killed by grenades.

Police managed to get six cooks, who were trapped in the wing where the fight happened, to safety and only two police officers were injured.

According to Mr Garzón, there was renewed shooting inside the prison overnight Tuesday into Wednesday and as police went through the prison wings one by one, they found scores more bodies, bringing the death toll to 116.

Four hundred officers were again sent into Litoral Penitentiary on Thursday morning amid reports of renewed gunfire and explosions.

The fact that only two police officers have been injured but more than 100 inmates killed strongly suggests this is a war among inmates rather than an attempt at a prison uprising.

Local media are reporting that the brutal killings could have been ordered from outside the prison mirroring a power struggle between Mexican cartels currently under way in Ecuador.

The Litoral Penitentiary holds inmates from Los Choneros, an Ecuadorean gang which is thought to have links with Mexico’s powerful Sinaloa drugs cartel.

But another Mexican criminal group, the Jalisco New Generation cartel (CJNG), is also trying to forge alliances with Ecuadorean gangs to seize control of drug smuggling routes leading from Ecuador to Central America from its Sinaloa rivals.

The decapitations and the brutal nature of the violence seen inside the Litoral prison are hallmarks of the Mexican cartels, which often kill their rivals in the most gruesome ways to spread further terror.

How did it get so bad?

This most recent prison fight is the deadliest in the history of Ecuador’s prison system but there have been a number of brutal confrontations in the past year.

In February, 79 prisoners were killed in simultaneous fights at four jails, one of them Litoral Penitentiary.

One of the problems, according to Ecuador Prison Director Garzón, is the fact prisoners are heavily armed.

He said that large amounts of arms had been smuggled into the jails and that police searches only ever uncovered a small proportion.

“What we manage to take out is very little, because they are so well hidden, we can’t do anything more.”

President Lasso has in the past blamed the increase in violence on overcrowding. In July, he said that Ecuador’s prison system was 30% over capacity.

At the time, he announced plans to expedite the process of releasing those inmates who had served most of their time or had committed minor crimes in order to ease the overcrowding.

On Wednesday, he declared a state of emergency in the prison system, which allows officials to suspend certain rights and use the military to regain control.

He also said that extra funds would be made available to provide prisons with more security cameras.

Relatives have been gathering outside the prison and also at a local morgue trying to get information about the fate of their loved ones.

Information about the victims has been scarce and with reports of some of the bodies being dismembered or burned it may take days to identify those killed.

Some of the relatives said they had been sent photos and video from inside the prison but had been given no official confirmation as to whether their family member was among the victims.

Newspaper El Comercio reported that one woman had recognised her husband in one of the videos. She said he was one of those who had been decapitated.