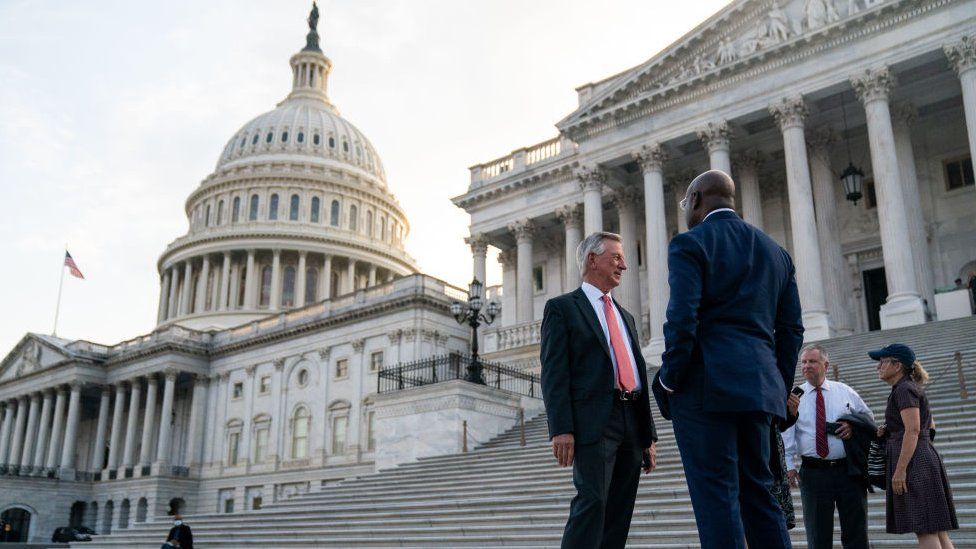 US politicians are once again battling over the funding of the federal government.

At the heart of this is a bitter row over lifting the debt ceiling – a limit on the amount the US government can borrow. If Republicans and Democrats don’t agree by Thursday night, the US could face a government shutdown.

There are also dire warnings of a catastrophic default on the national debt that could reverberate through the US and the global economy.

If this sounds familiar, it is – we’ve been here many times before. But the timing of this latest dispute is unique, with the US still recovering from the damaging impact of the Covid-19 pandemic. So what does it all mean and should we be worried?

Why is there a risk of a shutdown?

A shutdown happens when parts of the government close because politicians fail to agree a budget. They have become a feature of US politics in recent decades.

Under the US system, the different branches of government have to reach an agreement on spending plans before they can become law.

It was hoped that this would foster cooperation between the major political parties – but of course, Republicans and Democrats don’t often see eye-to-eye these days.

If an agreement is not reached by 1 October, then political leaders may agree on temporary funding based on the previous year’s needs through a so-called continuing resolution, with the assumption that this will end as soon as the annual budget is agreed.

If a continuing resolution isn’t agreed then we reach what most people hope to avoid: a shutdown.

Shutdowns are almost unique to US politics. In most countries, budget votes become votes of confidence in the government itself. But because the US has equal and often divided branches of government, that isn’t the case.

Under a shutdown, all non-essential government functions are frozen until congress reaches an agreement and the president can sign the bill into law.

Many federal agencies, which rely on the funding approved by Congress, are effectively closed down and hundreds of thousands of government employees have to take a leave of absence, often without pay.

Services such as national security, electricity generation and air-traffic control continue, but others that are considered non-essential, like visa and passport processing, could be delayed. Museums and national parks could also be closed.

Of particular concern, especially with the ongoing Covid-19 pandemic, is the potential hit that health services could take. A plan prepared by the Health and Human Services Department (HHS) found that it could be forced to send up to 43% of its staff home.

That said, every shutdown is different, and deciding which government services to suspend is not an exact science.

Why is this happening?

Stay with us, because this is where it gets complicated.

The House of Representatives, which is controlled by the Democrats, has already voted to pass a temporary continuing resolution which will keep funding federal agencies until December.

But the bill it has sent to the Senate also includes a provision to raise the debt ceiling. And Republicans aren’t happy about this.

Mitch McConnell, who leads the party in the Senate, says that he would approve spending plans but he will not raise the debt ceiling. He wants Democrats to use their slim majority in the chamber to approve it themselves.

But Democrats say that this process, known as budget reconciliation, is a “non-starter” as it could take weeks to approve.

What happens if there is no resolution?

Nothing good. If an agreement is not reached then the government will shut down indefinitely on 1 October.

Then for the first time ever, at some point between 15 October and 4 November, the US will default on its debts – currently standing at around $28 trillion.

The implications of this for the US are catastrophic. In an article for the Wall Street Journal earlier this month, Treasury Secretary Janet Yellen warned that the US “would emerge from this crisis a permanently weaker nation”.

And because the US remains the world’s largest economy, a default by Washington could plunge the rest of the world into chaos too.

Haven’t we been here before?

Yes, quite a few times. There have been 14 shutdowns since 1981, some lasting for just a day, others for over a month.

The most recent happened in 2019, when Democrats refused to agree to a budget that included $5.7 billion in federal funds to build then-President Donald Trump’s proposed wall along the Mexican border.

That shutdown gave us the iconic images of Mr Trump welcoming the winners of the national college football championship, the Clemson Tigers, with more than 300 McDonalds burgers as White House catering staff were prevented from working due to the shutdown.

That shutdown eventually came to an end after 35 days when Mr Trump relented on his demands.

Can a shutdown be avoided?

Maybe, but the options are running out.

At this stage the most likely outcome is that the Democrats will introduce a new continuing resolution to the Senate and send it to the House of Representatives.

Senate Majority leader Chuck Schumer, a Democrat, said the Senate “can approve this measure quickly, and send it to the House so it can reach the President’s desk before funding expires [at] midnight tomorrow”.

But this bill will not include a provision to raise the debt ceiling – meaning that row will continue to rumble on.