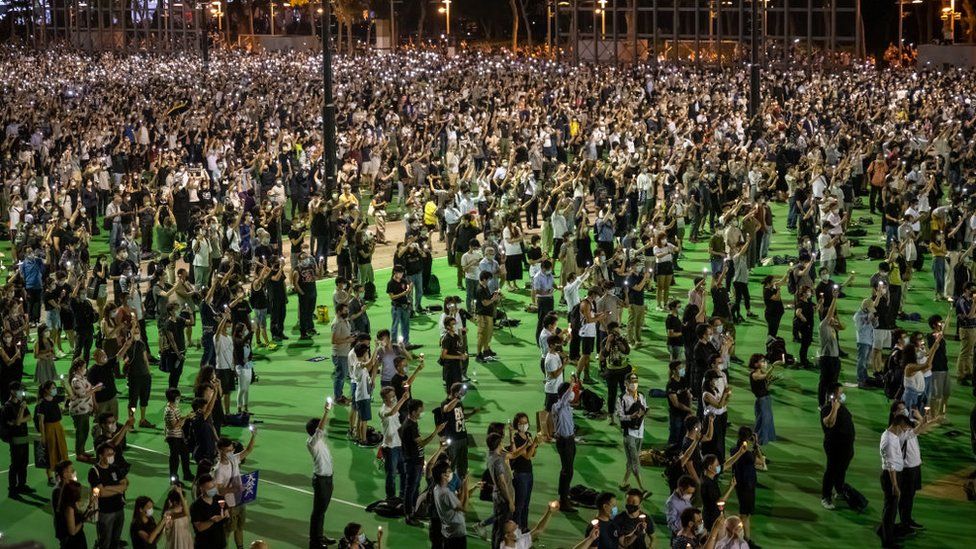 Nine Hong Kong pro-democracy activists have been sentenced to between six and 10 months in prison for taking part in a banned vigil last year commemorating the 1989 Tiananmen Square massacre.

They were among 12 people who pleaded guilty to participating in the event. Three were given suspended sentences.

Critics believe the decision was part of a push to silence the opposition.

Despite the ban, thousands of people turned up to light candles and sing songs in 2020. Smaller crowds did the same this year, when authorities banned the event, again citing pandemic restrictions on public gatherings.

Albert Ho, a veteran vigil organiser and former vice chairman of the Hong Kong Alliance in Support of Patriotic Democratic Movements of China, the organiser of the vigils, was handed a 10-month sentence for incitement and attending the event.

“They wrongly and arrogantly believed their common purpose was more important than protecting the community or the public’s right to protection from a serious health risk.”

The sentencing came a week after several leaders of the Hong Kong Alliance were arrested under the national security law imposed by Beijing last year. They were accused of working as a “foreign agent”, which they deny.

The legislation criminalises secession, subversion, terrorism and collusion with foreign forces. Critics say it is aimed at crushing dissent but China says it is meant to maintain stability.

Reacting to the sentencing, Amnesty International’s Asia-Pacific Director Yamini Mishra said this was “another outrageous attack on the rights to freedom of expression, association and peaceful assembly”.

“Depressingly, this unjust verdict was entirely expected amid the accelerating collapse of human rights in Hong Kong,” she added.