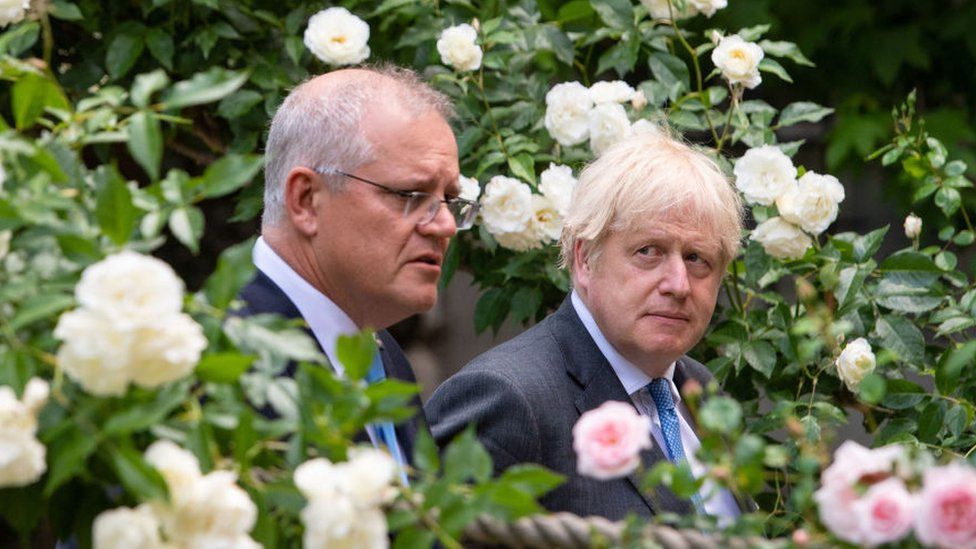 Ministers agreed to cut key climate pledges to help clinch the UK trade deal with Australia it has emerged.

According to an email from an unnamed Cabinet official, leaked to Sky News, government ministers referred to dropping “climate asks” to get the deal “over the line”.

The government said the deal will reinforce climate commitments.

The email, which was sent last month, states that Trade Secretary Liz Truss and Business Secretary Kwasi Kwarteng agreed to ditch references to the targets of the Paris Agreement on climate change to sweeten the Australian trade deal.

As a result, the draft agreement signed in June does not include an explicit commitment to limiting global warming this century to 1.5C above pre-industrial averages.

However, the government insisted that the trade agreement will include a firm commitment from both countries to the Paris goals when finalised.

A spokesperson said: “Our ambitious trade deal with Australia will include a substantive article on climate change which reaffirms both parties’ commitments to the Paris Agreement and achieving its goals. Any suggestion the deal won’t sign up to these vital commitments is completely untrue.”

They added that Britain’s climate change policies were some of “the most ambitious in the world”, with the UK being the first major economy to pass new laws to achieve net zero emissions by 2050.

“Australia and the UK have agreed to work cooperatively on environmental issues, including emissions reduction,” he said.

The UK trade deal will be consistent with the Comprehensive and Progressive Agreement for Trans-Pacific Partnership, a trade agreement between countries including Australia, Canada Japan, Mexico, New Zealand and Singapore.

“Our goal is to reach net zero emissions as soon as possible, preferably by 2050.

“Our technology not taxes approach to addressing climate change is delivering results, with updated forecasts showing Australia is on track to meet and beat our 2030 Paris target,” Mr Tehan added.

However, campaign group Greenpeace said that Australia’s commitments to the Paris Agreement were currently “very weak” and that it was the only developed economy not to have improved on emissions targets set out in 2015.

The country was also “nowhere close” to halving emissions by 2030, which climate scientists say is required to keep the goals of the Paris Agreement alive.

“The UK government pledged to embed the environment at the very heart of trade, including supporting the Paris Agreement on climate and zero deforestation in supply chains,” said Greenpeace executive director John Sauven.

“Signing an Australian trade deal with action on climate temperature commitments secretly removed is the polar opposite of everything Boris Johnson publicly pledged and rips the heart out of what the agreement stands for.”

He called for a moratorium on trade deals with countries like Australia until they improved on their climate policies and ended deforestation.

He also noted that Australia uses agrichemicals banned in the UK, including hormones that promote animal growth and neonicotinoid pesticides that are harmful to bees.

“No food should be imported using methods that are banned in the UK.”

Labour’s shadow business minister, Ed Milliband, said: “This government is pursuing trade deals at the expense of our farmers and now our climate targets. This is simply a massive betrayal of our country and our planet.”

The leaked email comes as the UK gears up to host the COP26 climate conference in Glasgow later this year.