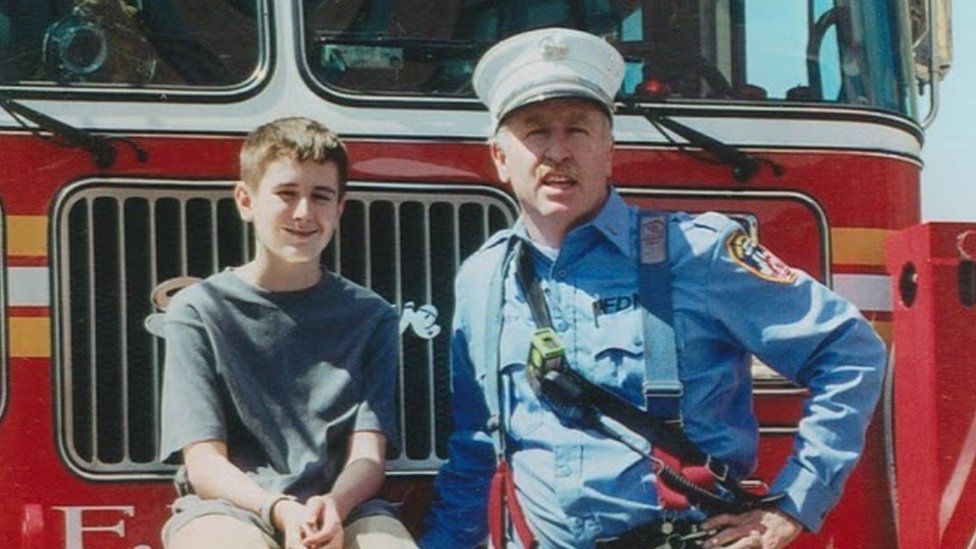 Thousand of lives were lost in the September 11 attacks on the US, leaving many children without a mother or father. The BBC’s Radio 5 Live spoke to some whose parents were killed or injured.

Brian Leavey’s dad Joseph was a firefighter with the New York Fire Department who died saving people’s lives at the World Trade Center.

Brian was 16 at the time and would later hear audio recordings from the day of his father talking with his men and going up the South Tower.

“That’s how we know the story of his unit. They were at the 78th floor at the time of the collapse of the building. They were one of the only units to make it to the fire floor. It was definitely a relief knowing that they did amazing work that day and I’m just so proud of how brave he was.”

Brian remembers his dad as “a big kid” who was always there for his children. “He loved being a father and taking care of us,” he said. “I was very fortunate to have 16 years with him whereas my younger sister only had 10.”

His father’s death made him “grow up a little faster” than other kids his age as he wanted to be there for his family and be the man of the house, he recalls.

Now a father himself, Brian said one of his regrets is not listening more to his dad when he tried to teach him DIY as a teenager.

“I think about it every day, how I wish he was around to fix things round the house or help me with a renovation. It’s one of the things I miss every day.”

Brian now works with the charity Tuesday’s Children, where he mentors other fatherless children from 9/11 and other terror attacks.

“I’m trying to turn a negative into a positive,” he added.

Anjunelly Jean-Pierre was 19 when her mother died.

Maxima Jean-Pierre was an immigrant from the Dominican Republic and worked in catering at the World Trade Center.

“That Wednesday was going to be my mom’s last day in that job, the commute had been too much for her,” said Anjunelly.

Staying with her father on the day of the attack, Anjunelly could see the Manhattan skyline from where she lived.

“I was calling her and it was just not going through,” she said. The next day, she went into the city to try and find her mother.

“No-one knew where to start, where to go, what to do, the city was eerily quiet.”

Anjunelly and her brother made missing posters which they tacked onto boards outside the city hospitals.

“To this day you can see a replica of the wall in the 9/11 Memorial Museum with my mom’s poster on it,” she said.

One of the hardest parts for Anjunelly is that the family never received any remains.

“Because of that it’s difficult to accept that that person is no longer there. There is actually still a part of the museum where they’re still searching for remains.

“When I go every year to Ground Zero for the ceremony, I try to come to terms with something I am dealing with that is difficult for me.”

Anjunelly now works at the US Capitol building in Washington, looking after visitors to the building, including heads of state. She is also a photographer and is working on a project to tell the stories of the many minorities’ lives who were lost that day.

“I started it because I believe you don’t hear the stories of the minorities who perished that day and their families,” she said.

‘It’s my way of giving back to the universe’

Singer Jax signed to Atlantic Records earlier this year after becoming a TikTok star during lockdown.

One of her first singles Like My Father is dedicated to her dad John Miskanic, a retired New York firefighter who was injured in the attacks.

Jax was only five when the planes hit the Twin Towers and her strongest memories of that day are that the sky turned black and she got let out of school early.

Her father’s crew was supposed to be going to the World Trade Center but was prevented from getting there by a bridge closure.

“The chaos of the city stopped him probably from a bad thing.”

In the following weeks, John was involved in the clean-up mission at Ground Zero, a job which had long-term implications for his health.

“[It] really, really injured his lungs and they made him retire,” said Jax.

That early retirement meant Jax’s father was at home more and able to support her career, taking her to acting and music lessons.

“I definitely can tell you that I wouldn’t be sitting here playing piano and playing shows and writing music, if it weren’t for my dad having the time to nurture it and help me,” she said.

Jax regularly performs at memorial concerts, raising money for the charities which support families affected by 9/11.

She will be involved in ceremonies to mark the 20-year anniversary.

“It’s my way of giving back to the universe for still letting my dad still be with us today,” she said.

‘This is my first anniversary as a father’

Jonathan Egan was in his first week at university in California when his father and aunt were killed in the World Trade Center.

Micheal Egan, who was from Hull, was an executive at the insurance giant AON and died helping his colleagues escape from the South Tower.

Jonathan’s mum was on the phone to her husband when the tower collapsed.

Jonathan says that losing his dad so young has meant his father has become “almost god-like”.

“I would have been able to understand, know and see any faults he had or may have had,” he said.

“In my mind, I was always trying to live up to this person that was this grand figure who worked so hard… to give me and my family a good life.”

Every anniversary is difficult but this one is even more so for Jonathan because he recently became a father himself to a boy whose middle name is Michael like his grandfather’s.

“This is my first anniversary as a father. I have thoughts about my father and chats I wish I could be having with him,” he said.

Jonathan now works with an organisation called Since 9/11, helping educate children about what happened and why it happened.