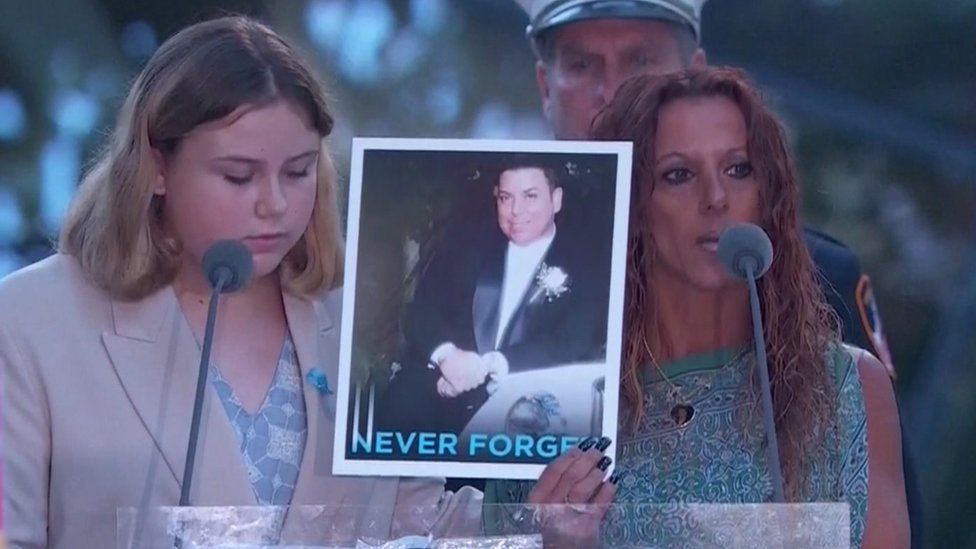 Emotional ceremonies are under way to commemorate 20 years since the 9/11 attacks against the US.

Thousands of people across the US have gathered to mark the sombre occasion.

In total, 2,977 people died in the attacks, when al-Qaeda militants hijacked US passenger planes and crashed them.

Most of those killed were US citizens, but the victims also included nationals from more than 90 countries.

‘Until we meet again, my love’

In between the moment’s silence, relatives of victims read out the names of those killed – many speaking in shaky voices as they struggled to maintain their composure.

Mike Low, whose daughter was a flight attendant in the first plane that hit the World Trade Centre, started the long list. Speaking solemnly, he thanked those who helped him and his family get through “the darkest days of our lives”.

Mr Low recalled the “grey and black world” of New York in the aftermath of the attack, and asked for 9/11 to be remembered “not as numbers or a date, but the faces of ordinary people”.

Relatives took turns to read the thousands of names, as well as messages to their own loved ones. Children who were born after 9/11 also took to the stage. One young girl told her uncle: “I never met you, but I really miss you”.

“Our son is the spitting image of you,” one woman says. “Twenty years feels like an eternity, but it still feels like yesterday.”

Fighting back tears, another woman spoke of her husband as she held up a photo of a many in a suit. “Continue to watch over us and your family,” she said. “Until we meet again my love.”

Bruce Springsteen sang his song I’ll See You In My Dreams to a silent crowd.

In a video released on the eve of the anniversary, Mr Biden paid tribute to the victims.

“No matter how much time has passed, these commemorations bring everything painfully back as if you just got the news a few seconds ago,” he said.

George W Bush, who was the US president at the time of the attacks, is in Pennsylvania, where United Airlines Flight 93 crashed into a field near the borough of Shanksville. It is though the hijackers of this flight had meant to attack the Capitol Building in Washington DC, but passengers fought back.

Earlier on Saturday, a vigil was held at the New York Fire Department’s memorial wall – a 56-foot bronze wall that honours the 343 firefighters who died on the day of the attacks.

In total, 441 first responders were killed, the largest loss of emergency personnel in US history.

At the Pentagon outside Washington, a dawn service was held.

Two pipers played Amazing Grace as a small group of military leaders looked on in solemnity, the building bathed in blue light.

A chapel of remembrance now marks the spot where American Airlines flight 77 crashed into the US defence building.

More on the 11 September attacks