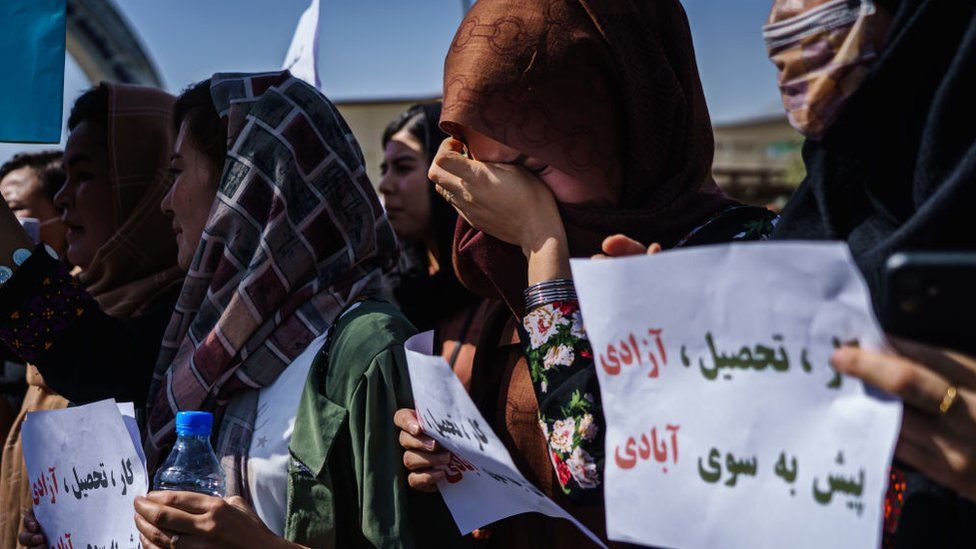 Protesters have again taken to the streets in several parts of Afghanistan, defying Taliban pressure to stay at home.

Dozens of demonstrators gathered near the Pakistan embassy in Kabul and Taliban gunmen opened fire to disperse them, protesters said.

More demonstrations were reported in Parwan and Nimruz provinces.

They are reported to have been badly beaten after being arrested by the Taliban in Kabul.

“One of the Taliban put his foot on my head, crushed my face against the concrete. They kicked me in the head… I thought they were going to kill me.”

Naqdi was covering a protest by women in front of a police station with his colleague at the local Etilaat Roz newspaper, Taqi Darybai.

The Taliban have banned protests unless authorised by the justice ministry.

In the latest demonstration, protesters chanting “we want freedom” were dispersed outside the Pakistan embassy.

Taliban gunfire also rang out at a protest in Parwan, Aamaj news reports. Marchers shouted: “No-one can silence our voice by force of arms, death to Pakistan and the United States.”

Dozens of women in Kabul and the north-eastern province of Badakhshan protested on Wednesday against the formation of an all-male interim Taliban government.

Some women, calling for the inclusion of female ministers in the government, were reportedly beaten before the demonstrations were broken up.

On Tuesday, three people were killed during a demonstration in the western city of Herat. The Taliban have denied that they were behind the violence.

Separately, there are reports that the internet has been taken down in parts of Kabul.

Afghanistan journalist Bilal Sawary tweeted that several sources in the telecom sector had confirmed to him that the Taliban had ordered mobile phone internet coverage to be turned off temporarily in several districts.