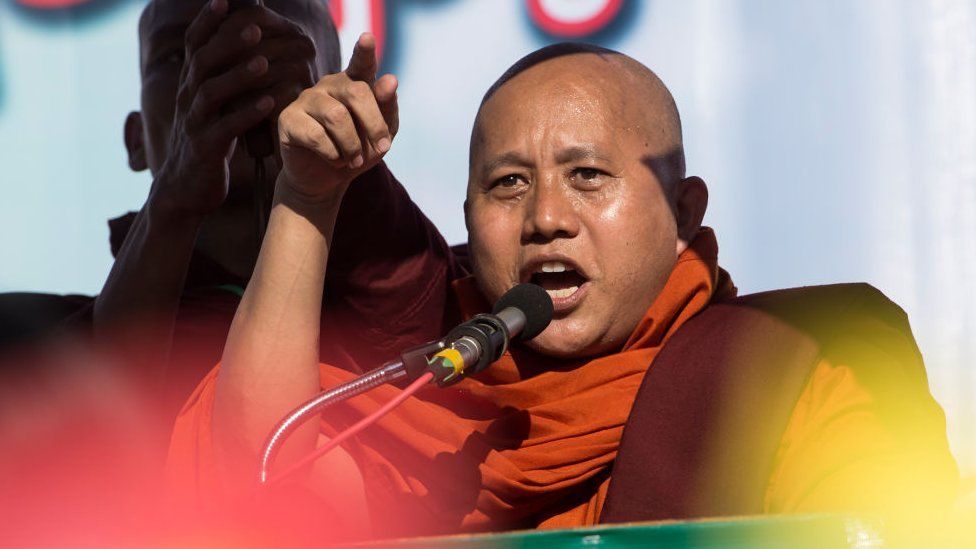 He had previously been charged for sedition against the civilian government, which has since been deposed in a February military coup.

The firebrand monk is known for his pro-military views.

He has been dubbed the “Buddhist Bin Laden” over his speeches targeting Muslims, particularly the Rohingya.

In recent years he had appeared at pro-military rallies delivering nationalist speeches and criticising then-leader Aung San Suu Kyi and her National League for Democracy government.

In 2019 he was charged with inciting “hate and contempt” against the civilian government.

Wirathu then went on the run, before surrendering to authorities in November last year. He had been awaiting trial since then.

On Monday the military government said that all charges against him had been dropped, but did not give any reasons.

It added that he was seeking treatment in a military hospital. Wirathu’s medical condition is not known.

Wirathu has been accused of stoking violence against Muslims and the Rohingya in Myanmar, and was one of the most prominent faces of the 969 movement – a Buddhist nationalist movement which calls on Buddhists to shop, sell property and marry within their own religion.

At the height of his popularity, he had tens of thousands of followers online watching his sermons on social media or attending his rallies.

He was catapulted into the public view for his speeches in 2012, when deadly violence broke out in Rakhine state between Muslims, mainly Rohingya, and Buddhists.

The following year, Time magazine put him on their front cover with the headline: The Face of Buddhist Terror?

In 2017 he was banned from preaching for one year by Myanmar’s highest Buddhist authority, and in 2018, Facebook wiped his page over hate speech.

Myanmar, a country of around 54 million, has Buddhism as its main religion.

In 2013, the BBC interviewed Wirathu at his Mandalay monastery.