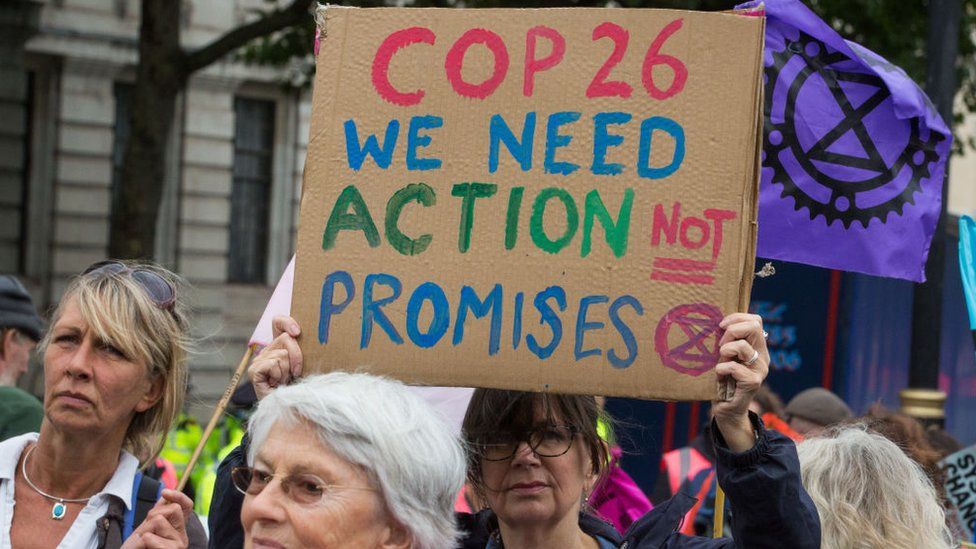 Green groups say that the COP26 climate conference due to be held in Glasgow in November should be postponed.

They argue that vaccine inequity and unaffordable accommodation will lock out “huge numbers” of developing country delegates.

But the UK government now says it will fund quarantine hotel stays for delegates, observers and media arriving from red list countries.

Vaccines are being rolled out for any delegate who needs one, ministers say.

The COP26 negotiations are seen as the most crucial gathering on climate change since the Paris agreement came into being in the French capital in 2015.

Around 200 heads of state and government are expected to attend, with thousands of delegates, civil society members and media.

Environmental groups are an important element in these global talks process.

While they have no direct power to influence outcomes, they act as observers and as advisers to many poorer countries that have limited personnel and resources to cover every aspect of this sprawling negotiation.

The Climate Action Network represents more than 1500 civil society organisations in over 130 countries.

They have been concerned for some time that the global response to Covid-19 was likely to impact delegates, campaigners and journalists from Global South countries, many of which are on the UK’s red list for the virus.

In a statement, they point to the fact that, according to the WHO, around 57% of people in Europe are now fully vaccinated, while in Africa the figure is around 3%.

“Our concern is that those countries most deeply affected by the climate crisis and those countries suffering from the lack of support by rich nations in providing vaccines will be left out and be conspicuous by their absence at COP26,” said Tasneem Essop, executive director of Climate Action Network.

“There has always been an inherent power imbalance within the UN climate talks and this is now compounded by the health crisis. Looking at the current timeline for COP26, it is difficult to imagine there can be fair participation from the Global South under safe conditions and it should therefore be postponed,” she added.

While the UK has repeatedly said that vaccines will be made available for any delegate who needs them, environmentalists point out that attendance at COP26 is about far more than just access to a jab.

The green groups say there are major issues with travel, quarantine costs and new surges in Covid-19.

“The UK has been too slow in delivering its vaccines support to delegates in vulnerable countries and their quarantine requirements come with some eye-watering hotel costs,” said Mohammed Adow, who’s a long-time observer of the talks and director of the Nairobi-based think tank Power Shift Africa.

“Some delegates are finding they cannot transit because some of the major travel hubs are closed and the alternative travel costs are beyond the reach of poorer governments and smaller civil society organisations.”

But in a statement, the UK minister tasked with running the talks said that every step would be taken to ensure inclusivity, including paying for quarantine hotels.

“We are working tirelessly with all our partners, including the Scottish Government and the UN, to ensure an inclusive, accessible and safe summit in Glasgow with a comprehensive set of Covid mitigation measures,” said COP26 President-Designate Alok Sharma.

“This includes an offer from the UK government to fund the required quarantine hotel stays for registered delegates arriving from red list areas and to vaccinate accredited delegates who would be unable otherwise to get vaccinated.

“Ensuring that the voices of those most affected by climate change are heard is a priority for the COP26 Presidency, and if we are to deliver for our planet, we need all countries and civil society to bring their ideas and ambition to Glasgow,” Mr Sharma said.

The government says that the offer of funding the required managed quarantine stays is for party delegates, observers and media who are arriving from red list areas who would otherwise find it difficult to attend COP, including all those from the Global South.

For some observers the row over vaccines goes to the heart of the Paris agreement which includes a reference to the “right to health” in the pact.

“The right to health and concern for fellow humans lie at the heart of the Paris Agreement – no one is safe until everyone is safe,” said Laurence Tubiana, who was a climate change ambassador for France during the Paris negotiations and is now the head of the European Climate Foundation.

“Covid-19 is a global challenge and the G20 must show solidarity with the Global South and equitably share vaccines – beyond just offering them to delegates attending the COP negotiations in Glasgow.”