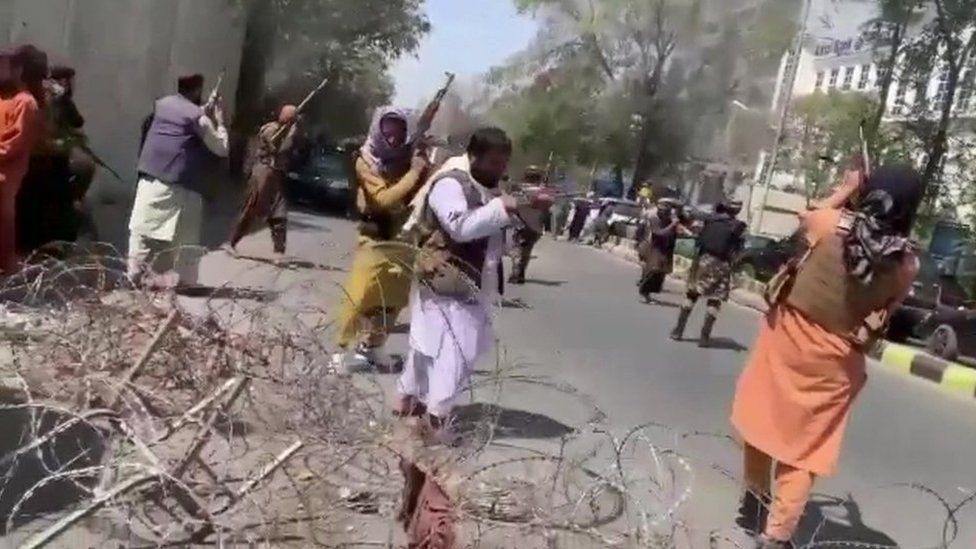 The Taliban have fired shots to disperse the crowd at a large protest in the Afghan capital, Kabul.

Video footage from the scene shows people running to safety, while heavy gunfire can be heard in the background.

Hundreds of protesters took to the streets on Tuesday to demand women’s rights and denounce Taliban rule.

A video sent to the BBC shows Taliban fighters firing their guns into the air – a move the group banned last week after several people were reported killed after celebratory aerial fire.

Some journalists, including the BBC’s team, were prevented from filming at the rally, and Afghanistan’s Tolo News agency reported that its cameraman was arrested along with some other local and foreign media workers.

Women have been protesting for the past week, but on Tuesday men also joined their calls for equality and safety. Many observers had commented that there were few men at the previous women-led rallies.

The demonstrations come one day after the leader of the anti-Taliban fighters, Ahmad Massoud, called for a “national uprising” by civilians against the militants.

Anger directed at Taliban and Pakistan

By Secunder Kermani, BBC Pakistan and Afghanistan correspondent in Kabul

The mood amongst the protesters was one of real anger, directed predominantly at Pakistan but also against the Taliban.

Large numbers of young women were among the crowd. One, chanting “death to Pakistan”, alleged the country’s air force had bombed Panjshir, the province where resistance forces have been holding out against the Taliban.

Pakistan has dismissed those claims, but is widely seen has having long supported the Taliban’s insurgency. Many in Afghanistan have long deeply resented what they see as Pakistani interference – a feeling exacerbated recently by the visit to Kabul of the head of Pakistan’s intelligence services, the ISI.

Taliban members in police vehicles initially drove alongside the protesters, not preventing them from demonstrating. However, they later fired volleys of bullets into the air to disperse the crowd, and stopped us and other journalists from filming further.

These protests are the biggest challenge to the Taliban’s authority we have seen so far in Kabul, and include bold and direct criticism of the group. One young woman said, “We demand freedom of speech, democracy… I’m not afraid of death.”