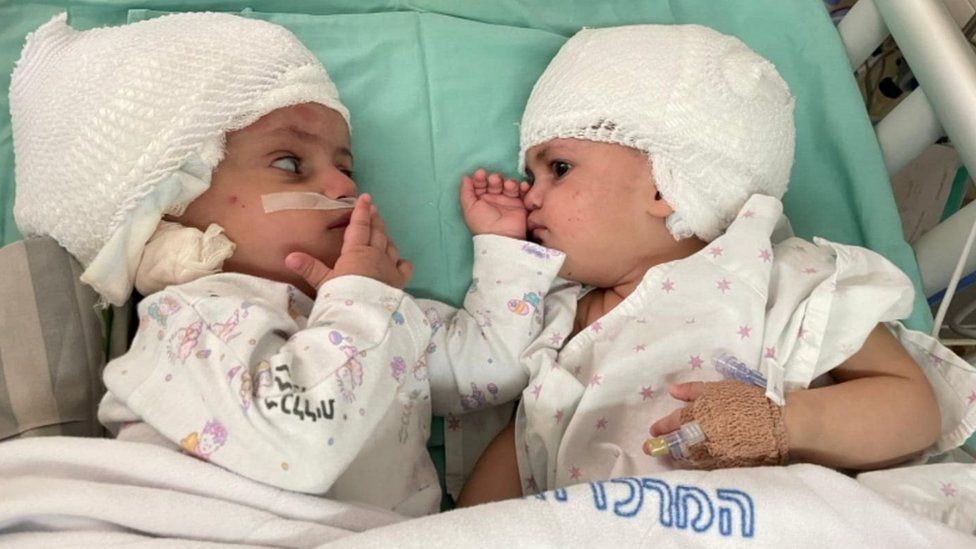 One-year-old twin girls who were born conjoined at the back of their heads have seen each other for the first time after undergoing rare separation surgery in Israel.

The 12-hour operation at the Soroka Medical Centre in the city of Beersheba last week took months of preparation, and included the scalp grafts for both.

Dozens of experts from Israel and abroad were involved.

The girls, who have not been named, are said to be recovering well.

“They are breathing and eating on their own,” Eldad Silberstein, the head of Soroka’s plastic surgery department, told Israel’s Channel 12 news.

It is the first time such an operation, which has only been conducted 20 times worldwide, has been performed in Israel.

Months before the surgery, inflatable silicone bags were inserted into their heads and periodically expanded to stretch skin. The new skin was then used to seal their heads after the skulls were reconstructed.

Preparation also included the creation of a 3D virtual reality model of the twins, said Mickey Gideon, Soroka’s chief neurosurgeon. “To our delight, everything went as we had hoped,” he added.

The girls, who were born in August 2020, are expected to lead completely normal lives.