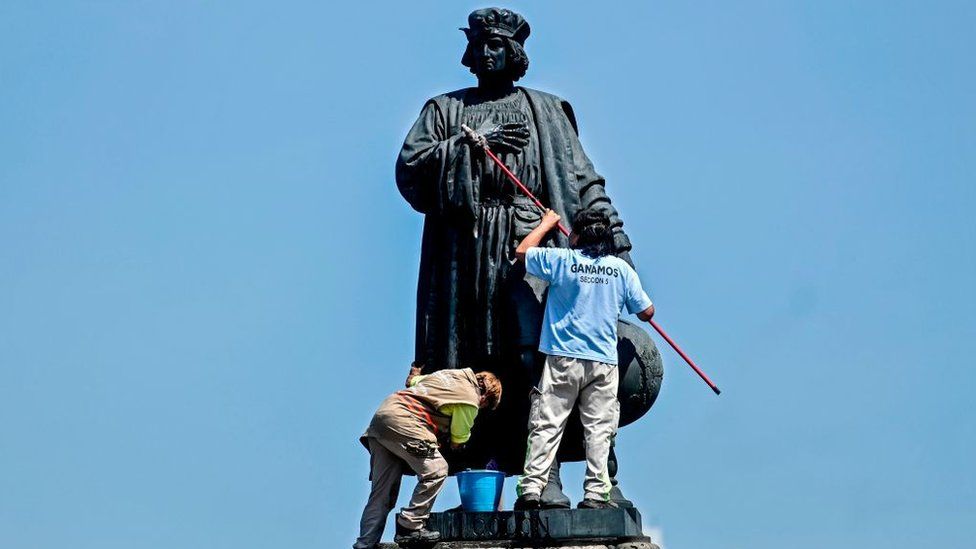 A statue of Italian explorer Christopher Columbus, which stood on one of the main avenues of Mexico City, will be replaced by one of an indigenous woman.

Mexico City Mayor Claudia Sheinbaum said the bronze likeness of Columbus would be moved to a park and a statue of an Olmec woman would take its place.

The Columbus statue was removed from its plinth last year ahead of protests.

Protesters have toppled Columbus statues in Latin America and the US.

Christopher Columbus, an Italian-born explorer who was financed by the Spanish crown to set sail on voyages of exploration in the late 15th Century, is seen by many as a symbol of oppression and colonialism as his arrival in America opened the door to the Spanish conquest.

Mayor Sheinbaum made the announcement on Sunday at a ceremony marking the international day of the indigenous woman.

She said that relocating the statue was not an attempt to “erase history” but to deliver “social justice”.

Ms Sheinbaum said that the Columbus statue “would not be hidden away” but that the civilisations which existed in Mexico before the Spanish conquest should receive recognition.

The mayor said that sculptor Pedro Reyes was working on a statue of a woman from the Olmec civilisation, which flourished in the Gulf of Mexico from 1200 BC to 400 BC, to replace that of Columbus on Reforma Avenue.

The plinth on which the Columbus statue stood has been empty since 10 October 2020 when it was removed “for restoration purposes” just two days before planned protests marking the arrival of Columbus in 1492.

Some activists had issued calls on social media for the statue to be toppled.