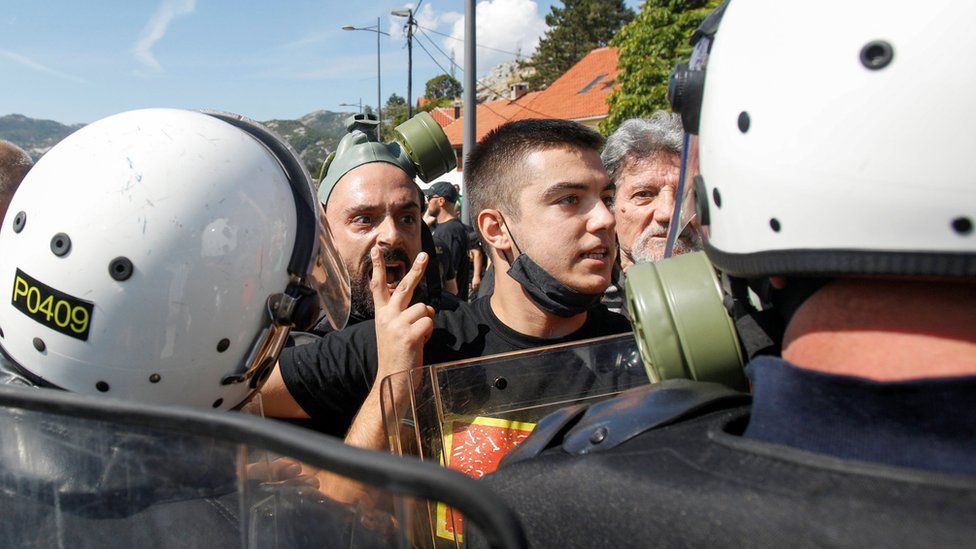 Thousands of demonstrators have blocked roads in southern Montenegro in a protest over the enthronement of a new Serbian Orthodox Church archbishop.

Angry crowds threw stones at police and pulled down security fences around the monastery in the city of Cetinje where the ceremony will take place on Sunday.

Demonstrators shouted “This is not Serbia!” and “Long live Montenegro!”

The protests reflect tensions in the country, which broke away from Serbia in 2006.

The Serbian Orthodox Church is Montenegro’s largest religious institution, but has been in conflict with President Milo Djukanovic. He claims the Church is trying to undermine the country’s independence and bring Montenegro back under Serbia’s control.

The president has urged protesters to disrupt the ceremony of the enthronement of Joanikije II to the top clerical position, known as the Metropolitan of Montenegro and Archbishop of Cetinje.

“We’re on the barricades today because we’re fed up with Belgrade denying our nation, and telling us what are our religious rights,” protestor Andjela Ivanovic told Reuters news agency. “All religious objects [churches] built in Montenegro belong to people here and to the state of Montenegro.”

The president is still reeling from the defeat his Democratic Party of Socialists (DPS) suffered in last year’s parliamentary election, which came after he pushed through legislation which would have allowed the state to claim Church property.

The move backfired when the Church campaigned for the opposition, pushing the DPS from power for the first time in three decades.

Montenegrins who identify as ethnic Serbs account for about a third of the country’s 630,000 population, according to the latest census data. The majority of Montenegrins are members of the Serbian Orthodox Church.