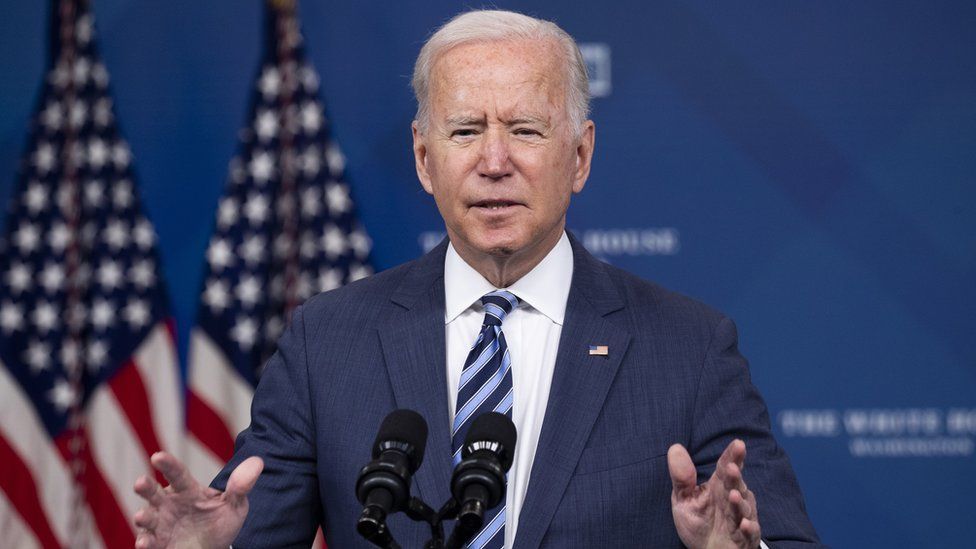 US President Joe Biden has launched a “whole-of-government” response to oppose a new law in Texas that bans most abortions.

He called the decision by the US Supreme Court not to block the law an “unprecedented assault” on women’s rights.

Any individual now has the right to sue anyone involved with providing an abortion past about six weeks.

This is before many women know they are pregnant.

Mr Biden said he would see what steps the national government could take to “insulate women and providers”.

Rights groups had asked the Supreme Court to block the law, but it refused following a 5-4 vote.

The majority said their decision was not based on any conclusion about whether the Texas law was constitutional or not, and that the door remained open for legal challenges.

“The highest court of our land will allow millions in Texas in need of critical reproductive care to suffer while courts sift through procedural complexities,” said the president.

In the Texas city of San Antonio, Planned Parenthood told the BBC on Thursday that it had paused its abortion services “while this plays in the courts”.

“In the week leading up to the law taking effect, we had twice the number of patients [than normal] coming to us… We had people last week from all over the state calling us because they couldn’t make an appointment anywhere else”, said its director of public affairs, Mara Posada.

Elsewhere in the state, a 21-year-old woman who had an abortion earlier this week told the BBC: “It’s taken away most women’s ability to choose.”

“I was right at five weeks when I went,” she said.

He said the law violated the landmark Roe v Wade case in 1973, in which the Supreme Court legalised abortion across the US, ruling that women have an unfettered constitutional right to the procedure during their first trimester (12 weeks) of pregnancy.

White House spokeswoman Jen Psaki earlier told reporters that the president had long wanted to see the “codification” of Roe v Wade – which would mean Congress voting to make the precedent federal law.

Texas’ Republican Governor Greg Abbott, who signed the Heartbeat Act into law, has said the state will “always defend the right to life”.

What does the new law say?

The American College of Obstetricians and Gynaecologists has said the term “heartbeat” is misleading, and that what is being detected at this stage is “a portion of the foetal tissue that will become the heart as the embryo develops”.

The Texas law enforces its ban with an uncommon approach: it empowers any private citizen to sue anyone who “aids and abets” an illegal abortion.

The legislation makes an exception in the case of medical emergency, which requires written proof from a doctor, but not for pregnancies resulting from rape or incest.

Texan women who wish to have an abortion after six weeks will need to travel to other states. The pro-choice Guttmacher Institute estimates this is a journey of an average of 248 miles (399km).

How does the law differ from other restrictions?

Most abortion restrictions that have been proposed before have relied on criminal penalties or some form of regulatory punishment.

The Texas law, which was signed into law by Governor Greg Abbott in May, instead authorises “a private civil right of action”, which allows people to sue to enforce the law even if they themselves have not been harmed.

An ordinary American, from Texas or elsewhere, may now be able to seek up to $10,000 (£7,200) in damages in a civil court against abortion providers and doctors – and possibly anyone at all involved in the process. That means people like clinic staff, family members, or clergy who encourage or support the procedure could, in theory, be sued.

Turning over enforcement of the Heartbeat Act to private citizens instead of government officials likely means that – in the absence of Supreme Court intervention – the law cannot be challenged until a private citizen seeks damages.