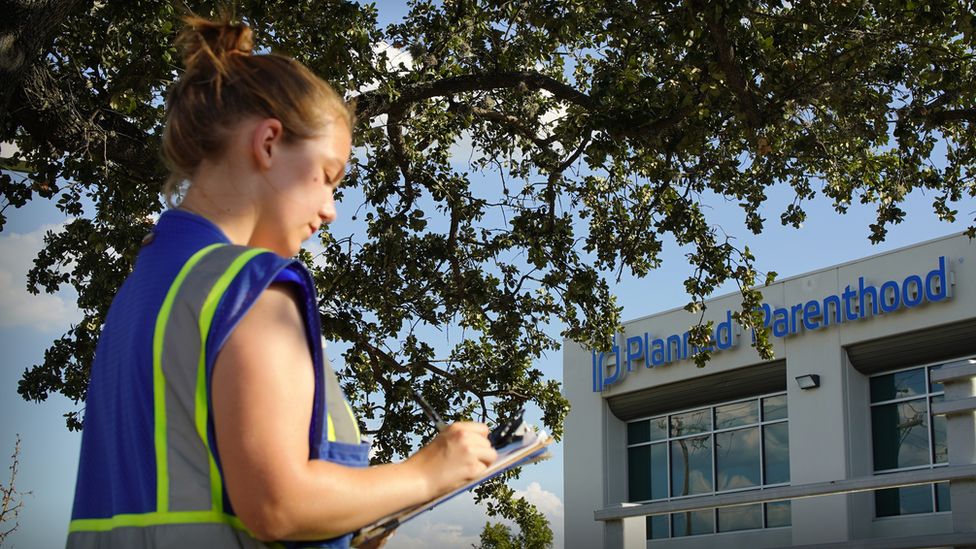 A new law restricting access to abortions is being celebrated by supporters in Texas, but for the doctors and pro-choice activists who could be prosecuted under it, this was a dark day.

On Tuesday afternoon, Eva Alpar was approaching women outside a clinic that provides a range of health services, including abortions.

As a volunteer with the San Antonio Coalition for Life, she tracks the number of cars that come by each hour and hands out goodie bags with snacks and body wash to women going inside to seek services.

Inside the bags are brochures that list alternatives to an abortion.

The previous 72 hours had been busy at this south Texas clinic. Across the state, abortion providers said more patients were looking to terminate their pregnancies ahead of the new law which effectively bans abortions after six weeks.

For Ms Alpar, this law – which came into effect on Wednesday after the US Supreme Court did not intervene – is a huge win.

“A good day [on the job] means I’m able to get at least one referral,” Ms Alpar said, standing in 90F (32C) heat right next to speeding cars that often honk at her.

“That means we get them to leave Planned Parenthood and go over to a woman’s [health centre] instead,” to discuss alternatives to an abortion. (Planned Parenthood is one of the largest abortion services providers in the country.)

On Wednesday, members of the anti-abortion coalition showed up again at the clinic, only to find it closed for medical procedures.

The website for the location reads: “Due to Texas’ new law SB 8, we are unable to provide abortion at this time. We are challenging this law and hope to resume abortion care in the future.”

“Today is a wonderful day for Texas,” said Catherine Nix, the executive director of the Coalition for Life, after briefly speaking to a woman who accepted a bag from her.

“We are here everyday trying to help women choose life, and today the law is now behind us to help us do that.”

This law, one of the nation’s most restrictive, is not directly meant to penalise women seeking abortions. While it bans abortions after the detection of a foetal heartbeat, the law’s broad language suggests lawsuits may be brought by private citizens against those who aid, abet or perform abortions.

That includes someone who helps a patient cover the medical cost of terminating a pregnancy or provides them transportation to get the procedure – if it’s done after six-weeks gestation.

The law could impact someone like Bridget, who has previously volunteered with the Clinic Access Support Network to drive patients to their abortion appointments.

“This bill is targeting people who already do not have the resources necessary to get themselves to an appointment,” she said. That includes people, often women of colour, from low-income homes who don’t count on a support system from their families or partners.

“The whole purpose of the bill is to bankrupt organisations like ours and shut down clinics.”

According to the Texas Policy Evaluation Project at the University of Texas, this law will prevent eight in 10 people from obtaining abortion care. Many women do not know they are pregnant before the six-week point cited in the law.

‘I’m afraid for my future’

Dr Ghazaleh Moayedi, who carries out abortions in her OB/GYN practice in north Texas, said she feels targeted. In the 15 years that she has worked in abortion care, she has seen greater restrictions in the state, but never anything as aggressive as this law.

She said that the bill will immediately stop access to care for 90% of the people that see her for abortions and that those patients will likely be forced to consider going out of state or to continue unwanted pregnancies.

Her biggest fear is for women who will seek dangerous alternatives to a medical abortion with the help of a doctor – but she also fears for herself.

“I’m afraid for my personal future and the future of my career as a result of this.”