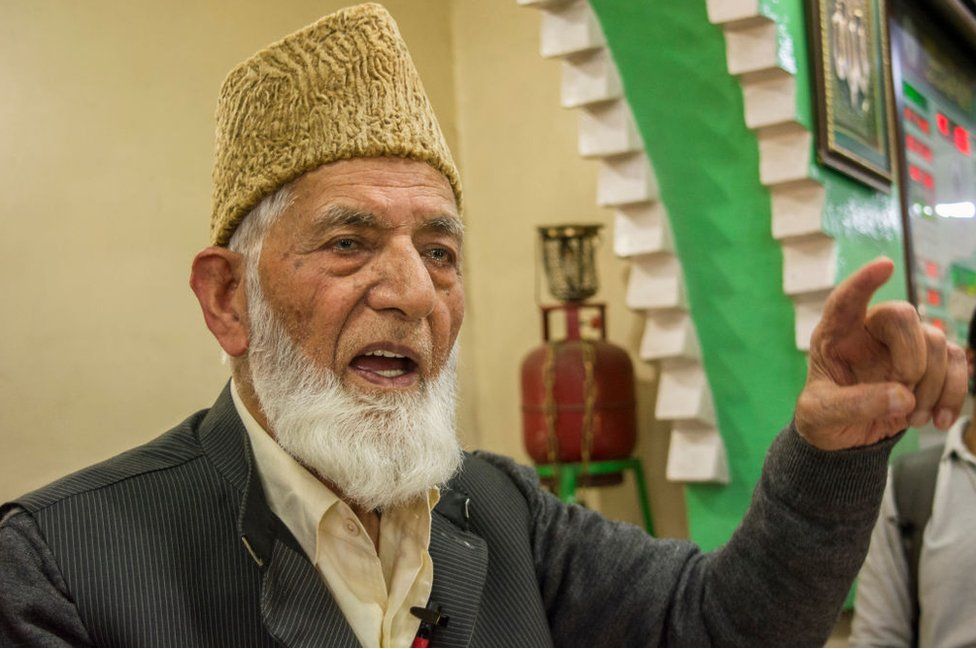 Kashmiri separatist leader Syed Ali Geelani has died at his home in Srinagar at the age of 92.

He passed away after a lengthy illness.

A veteran campaigner against Indian rule, he had been under house arrest for much of the past 11 years.

Local reports say a curfew may follow, and internet services may be cut off.

Such measures are not unusual at moments of tension in Indian-administered Kashmir. Police typically describe them as precautionary, citing the need to stop online rumours fuelling potential violence.

India and Pakistan control different parts of the Muslim-majority territory, but both say it is wholly theirs. There has been violence on the Indian-run side for 30 years, due to a separatist insurgency.

He said the separatist leader had “struggled all his life for his people & their right to self-determination”.

Police in Kashmir have said only close relatives will be allowed to attend Geelani’s funeral.

AFP news agency reports that announcements were made from loudspeakers at the main mosque near Geelani’s home after his death, asking local people to march towards it.

However, Indian troops and armoured vehicles are said to be on the streets and police have urged residents to stay indoors.

Geelani was a legislator for more than 15 years, representing Jamaat-i-Islami – a major political-religious organisation in Indian Kashmir, which was banned by Prime Minister Narendra Modi’s government in 2019.

He spent long spells in prison, including nearly 10 years after 1962, shortly after he began campaigning for Kashmir to merge with Pakistan.

Geelani led a faction of the All Parties Hurriyat Conference, an umbrella group of almost two dozen separatist parties – but walked out in 2020, accusing others of “revolting against his leadership”.

He was known for his strong opposition to any kind of dialogue with India. He insisted that a plebiscite on whether Kashmir should remain under Indian rule should be held before talks could take place.

This often put him in conflict with younger colleagues, who were more open to holding talks with Indian leaders.

In 2020, Geelani was awarded the Nishan-e-Pakistan, Pakistan’s highest civilian honour.