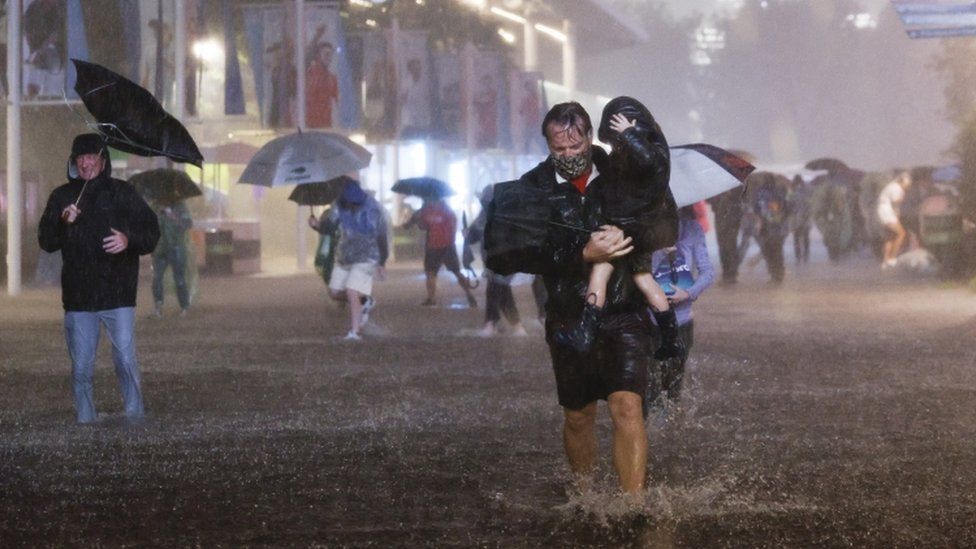 At least nine people have died after flash flooding and tornadoes hit the north-eastern US, local media report.

Some people were trapped in flooded basements of their homes, while one body was found in a vehicle that was swept away.

At least 3in (8cm) of rain fell in just one hour in New York’s Central Park.

Almost all New York City subway lines have been closed, and non-emergency vehicles banned from roads. Many flights and trains out of New York and New Jersey have been suspended.

The mayor of the city of Passaic in New Jersey, Hector Lora, told CNN the body of a man in his 70s had been recovered from a vehicle that had been swept away in the floods.

A two-year-old boy was among the victims in New York City.

New York resident George Bailey told the BBC: “Right in the middle of dinner I hear gurgling, and the water’s coming up out of the shower drain in our bathroom.

“I went to check the main water line in the utility room, and by the time I walked back into the living room there was nearly a foot of water. It was incredible how fast it came through.”

The US National Weather Service declared a flood emergency in New York City, Brooklyn, Queens and parts of Long Island, and issued tornado warnings for parts of Massachusetts and Rhode Island.

A flood emergency, as opposed to a warning, is issued in “exceedingly rare situations when a severe threat to human life and catastrophic damage from a flash flood is happening or will happen soon”, the NWS said.

‘My train was stuck, there was no way out’

At 20:00 (16:00 GMT) on Wednesday night, torrential rain began to fall as the Amtrak train I regularly get between Washington and New York approached New Jersey.

Suddenly, my phone lit up with flash flooding alerts, and the rainfall intensified, vast sheets of water hammering the side of the train.

“It’s like a car wash,” said the cafe car attendant as we stopped at Metropark station. Soon came the announcement of flooding on the tracks ahead of us, making it impossible to reach New York.

I called my husband at 01:00 and told him I was stuck. “There is no alternate transportation,” read a sign at Metropark station. The roads around us were flooded, there was no way out, so I settled in for the night.

At 02:00 came the announcement that our train was going back to Washington. I changed trains to one bound for New York – which still hadn’t left as of 06:15. My husband is driving to get me, though he says many roads are closed.

This is the new world of extreme weather – severe, exacerbated by climate change.

The extreme weather has been caused by the remnants of Tropical Storm Ida, which caused widespread devastation in southern Louisiana earlier this week.

The remnants of Hurricane Ida have been pushing north across the east of the country, having hit Louisiana as a Category 4 hurricane on Sunday.

Hundreds of thousands of homes in Louisiana remain without power and New Orleans is under a night-time curfew.

Two people died when a motorway in Mississippi collapsed, while two others died in Louisiana – one in flash flooding, and another who was hit by a falling tree. Two electrical workers in Alabama were killed while they were repairing damage caused by the hurricane.

More than 400 people had chosen to stay in the town ahead of the storm, and dozens needed to be rescued from attics and rooftops, the local police chief said.

Galliano, on the Gulf Coast, was also badly hit, and the roof of the Lady of the Sea Hospital in the town was blown off by the heavy winds.

Are you in New York? If it is safe to do so, please get in touch with your experiences.