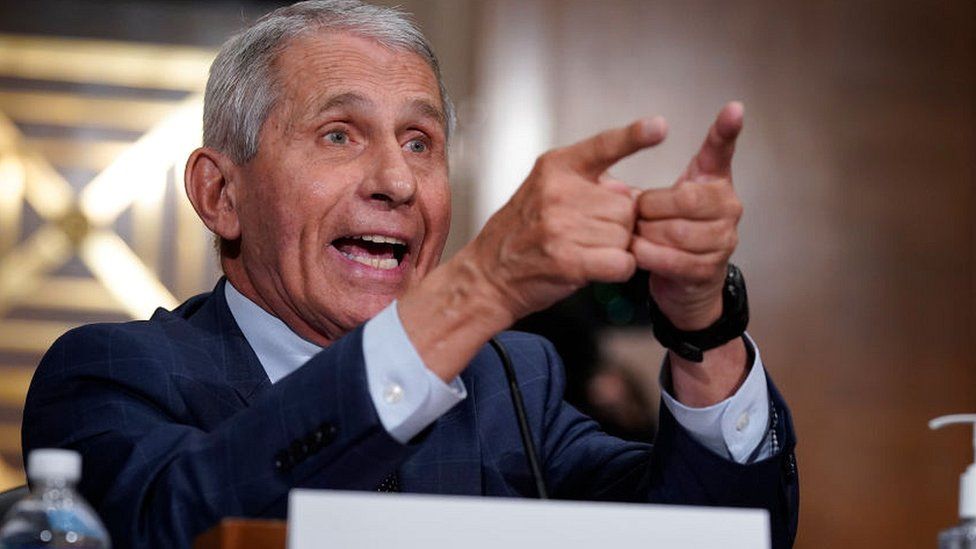 As the debate continues over the origins of the coronavirus, a fresh row has erupted over virus research being carried out in China using US funds.

It’s linked to the unproven theory that the virus could have leaked from a lab in Wuhan, the Chinese city where it was first detected.

Republican Senator Rand Paul alleges that US money was used to fund research there that made some viruses (not the coronavirus) more infectious and more deadly, known as “gain-of-function”.

But his assertion has been firmly rejected by Dr Anthony Fauci, the US infectious diseases chief.

What is ‘gain-of-function’ research?

“Gain-of-function” is when an organism develops new abilities (or “functions”).

This can happen in nature, or it can be achieved in a lab, when scientists modify the genetic code or place organisms in different environments, to change them in some way.

With viruses that could pose a risk to human health, it means developing viruses that are potentially more transmissible and dangerous.

Scientists justify the potential risks by saying the research can help prepare for future outbreaks and pandemics by understanding how viruses evolve, and therefore develop better treatments and vaccines.

Did the US fund virus research in China?

Yes, it did contribute some funds.

This body did give money to an organisation that collaborated with the Wuhan Institute of Virology.

That organisation – the US-based EcoHealth Alliance – was awarded a grant in 2014 to look into possible coronaviruses from bats.

EcoHealth received $3.7m from the NIH, $600,000 of which was given to the Wuhan Institute of Virology.

In 2019, its project was renewed for another five years, but was then cancelled in April 2020 because of the pandemic.

Was US money used for ‘gain-of-function’ studies?

In May, Dr Fauci stated that the National Institutes of Health (NIH) “has not ever and does not now fund gain-of-function research in the Wuhan Institute of Virology”.

Senator Rand Paul asked Dr Fauci this week if he wanted to retract that statement, saying: “As you are aware it is a crime to lie to Congress.”

Senator Paul believes the research did qualify as “gain-of-function” research, and referred to two academic papers by the Chinese institute, one from 2015 (written together with the University of North Carolina), and another from 2017.

One prominent scientist supporting this view – and quoted by Senator Paul – is Prof Richard Ebright of Rutgers University.

He told the BBC that the research in both papers showed that new viruses (that did not already exist naturally) were created, and these “risked creating new potential pathogens” that were more infectious.

“The research in both papers was gain-of-function research”, he said.

He added that it met the official definition of such research outlined in 2014 when the US government halted funding for such activities due to biosafety concerns.

The funding was paused to allow a new framework to be drawn up for such research.

Why does Dr Fauci reject this charge?

Dr Fauci told the Senate hearing the research in question “has been evaluated multiple times by qualified people to not fall under the gain-of-function definition”.

He also said it was “molecularly impossible” for these viruses to have resulted in the coronavirus, although he did not elaborate.

The NIH and EcoHealth Alliance have also rejected suggestions they supported or funded “gain-of-function” research in China.

They say they funded a project to examine “at the molecular level” newly-discovered bat viruses and their spike proteins (which help the virus bind to living cells) “without affecting the environment or development or physiological state of the organism”.

One of the US scientists who collaborated on the 2015 research on bat viruses with the Wuhan institute, Dr Ralph Baric from the University of North Carolina, gave a detailed statement to the Washington Post.

He said the work they did was reviewed by both the NIH and the university’s own biosafety committee “for potential of gain-of-function research and were deemed not to be gain-of-function”.

He also says that none of the viruses which were the subject of the 2015 study are related to Sars-Cov-2, which caused the pandemic in 2020.

He does acknowledge that the work they carried out showed the viruses had “intrinsic properties” giving them the ability to infect humans.

But he adds: “We never introduced mutations into [the virus] spike to enhance growth in human cells.”

US researcher and biologist Alina Chan at the Broad Institute of MIT and Harvard has highlighted issues with the wording of the government’s pause to funding in 2014.

It says that it would stop funding research that “may be reasonably anticipated to confer attributes to influenza, MERS, or SARS viruses such that the virus would have enhanced pathogenicity and/or transmissibility in mammals via the respiratory route.”

This could imply that research on viruses may not intend to produce “gain-of-function”, although that could be the end result of it.

A more general point is that any evaluation of research and the risks involved can be subjective.

Rebecca Moritz of Colorado State University told the BBC: “There is not always consensus [on gain-of-function research] even amongst experts, and institutions interpret and apply policy differently.”