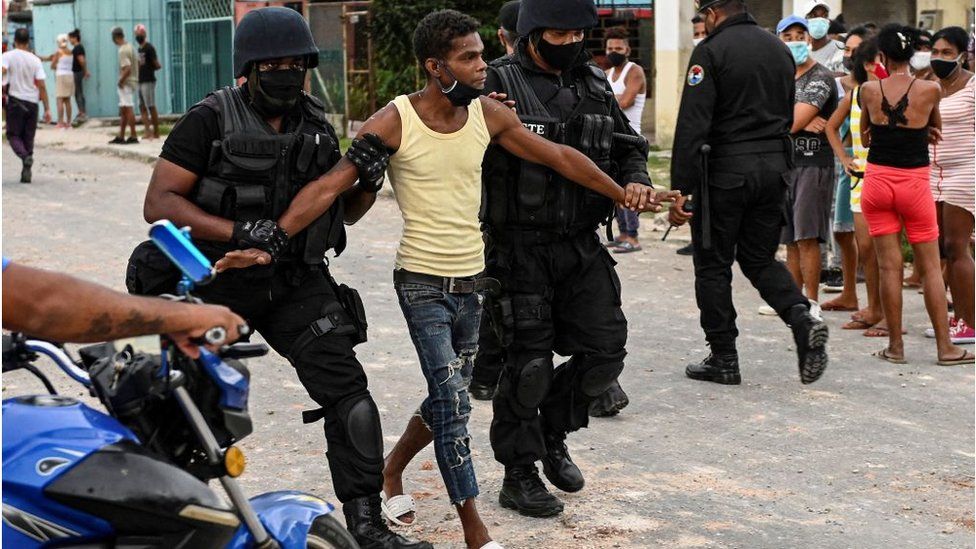 The US government has imposed sanctions on Cuban officials who they claim committed human rights abuses during a crackdown on protests earlier in July.

The move by President Joe Biden’s administration comes amid pressure from Cuban-Americans and politicians to respond to the anti-regime protests.

The US is also exploring ways to keep internet access open on the island.

The 11 July protest was Cuba’s largest in decades. Hundreds were arrested and at least one protester was killed.

Cuba has blamed the US and its economic sanctions for the protests and Cuba’s wider problems. The US has said it supports the Cuban people asserting their rights.

Demonstrators have said they were angry about the collapse of the economy, food and medicine shortages, price hikes and the government’s handling of Covid-19.

“This is just the beginning,” Mr Biden said in a statement. “The United States will continue to sanction individuals responsible for the oppression of the Cuban people.”

During the presidential race, Mr Biden had pledged to undo then-President Donald Trump’s travel and economic policies against Cuba.

White House officials say Mr Biden may increase the number of staff at the Havana embassy in an effort to support the Cuban people. Earlier this week, the White House also formed a group to discuss ways for Cubans living abroad to send money home in a way that avoids government-controlled banks.

In recent weeks, Cuban-Americans, especially those in Florida who supported Mr Trump in the 2020 election, have been fiercely critical of Mr Biden’s response to the protests.

“Cuba policy puts Joe Biden in a bind, caught between those on the left who long for a return to Obama-era diplomatic outreach and Cuba hard-liners, particularly in the key electoral battleground of Florida,” says Anthony Zurcher, the BBC’s senior North American reporter.

“It’s a delicate balance that may leave no one satisfied.”