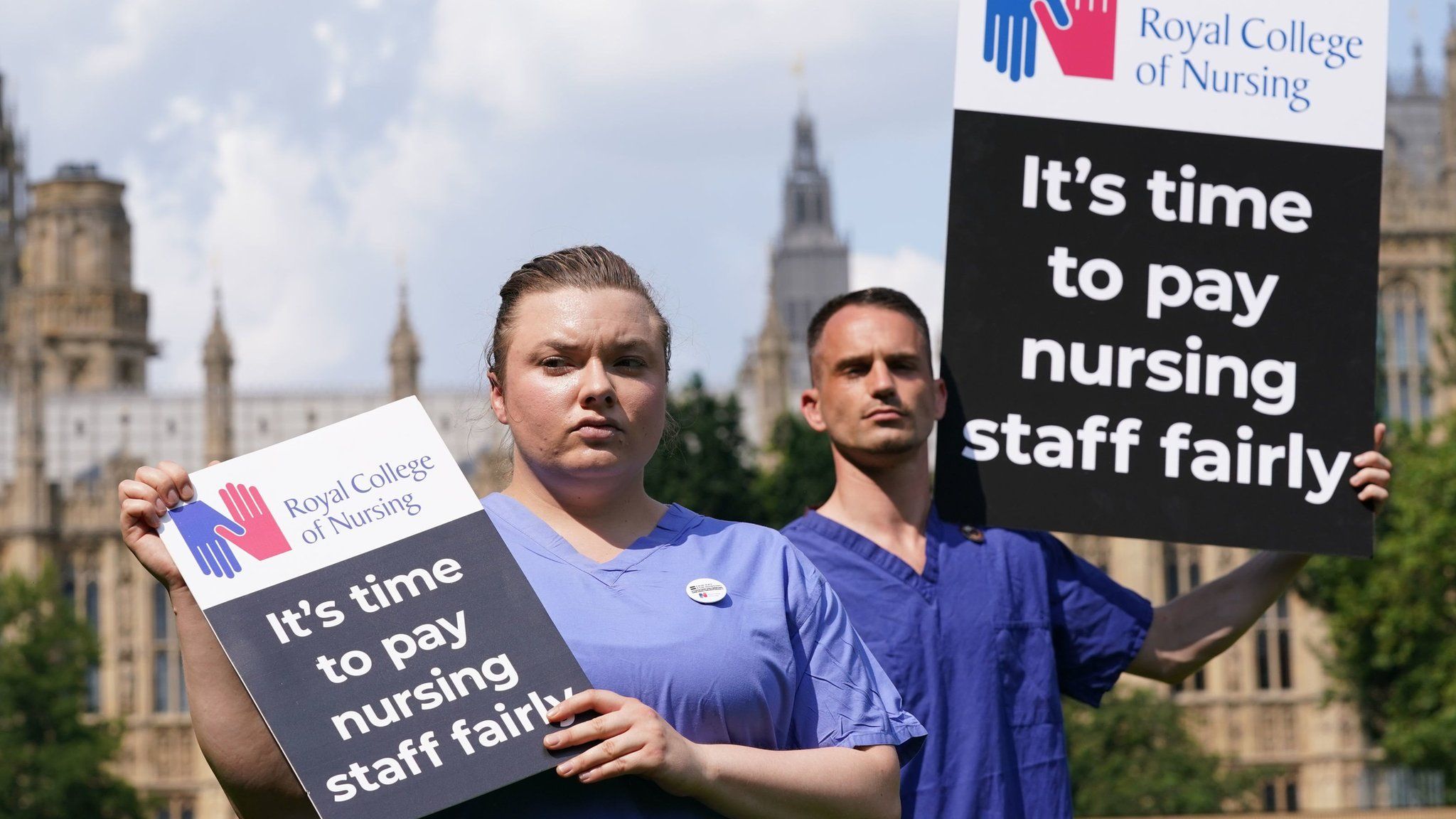 Nurses and other NHS workers in England have been offered a 3% pay rise by government “in recognition of unique impact of the pandemic” on staff.

It comes after heavily criticised proposals made by the Department for Health and Social Care in March said only a rise of 1% was affordable.

But some health unions opposed the new figure saying it does not reflect the sacrifices made by staff.

They point out the NHS workforce has been under unprecedented pressure.

The British Medical Association (BMA), which represents doctors, said the pay rise was disappointing and that junior doctors and some GPs could miss out on it altogether.

Dr Chaand Nagpaul, of the BMA, said many doctors had not taken annual leave in the past year and now “face a gruelling year ahead with millions of patients on waiting lists, and the country in the midst of another Covid-19 wave”.

Labour’s shadow health minister Justin Madders described the new pay rise as a “U-turn” and called on the government to “make our NHS and key workers feel supported and valued after all they have done for us”.

The rise in pay for healthcare workers follows a public sector pay freeze for 2021-22, announced by the government in November, with exceptions made for those on salaries under £24,000 and NHS staff.

The 3% pay rise is for most NHS staff including nurses, paramedics, consultants, dentists and salaried GPs and is backdated to April 2021.

According to government calculations for the average nurse, this will mean an additional £1,000 a year, while many porters and cleaners will receive around £540.

“We will back the NHS as we focus our efforts on getting through this pandemic and tackling the backlog of other health problems that has built up.”

NHS pay rises are negotiated by independent pay-review bodies that look at evidence from a range of groups before making recommendations to the government.

The pay rise does not include doctors and dentists in training who have their own separate, multi-year contracts.

Frantic end to day of frustration

It was a day of frustration for health unions and their members.

There was a widespread expectation that the details would be revealed in a health minister’s statement to the Commons at lunchtime.

But MPs were told the government was still considering pay review body recommendations.

Then the announcement came at 18:00 BST, suggesting a frantic afternoon finalising the deal with the prime minister, chancellor, and health secretary all self-isolating.

Union reaction has been varied with one group acknowledging ministers had made a significant step up from the original 1%offer.

Others though said the 3% on the table was insufficient recognition of the huge effort of NHS staff during the pandemic.

The details will be put to union members in the next few weeks and it will be hard to predict the response at a time when pressure on the health service is intensifying because of another Covid surge.

Members of the Royal College of Nursing (RCN) gathered in Westminster ahead of the announcement with placards and banners demanding a 12.5% pay increase.

One of those demonstrating, Kafeelat Adekunle, 55, a community matron with Guy’s and St Thomas’ NHS Foundation Trust in London, described the pay rise as “mad”.

“I’m not happy,” she told the PA news agency. “They’re not listening, that’s the whole problem. This is just to try and stop us from doing industrial action, just to keep us quiet, keep us shushed.”

Unison general secretary Christina McAnea said the increase, though an improvement on the initial offer, fell short of what NHS staff deserved.

“The government has failed to show staff just how valued they are to us all,” she said, warning some staff may now leave the health service.

Unite national officer for health, Colenzo Jarrett-Thorpe, described the 3% offer as “small step forward on the insulting 1% the government offered in March”.

“However, this recommendation in no way recognises the 19% drop in real earnings that many NHS workers have endured in the last decade, nor the immense sacrifices that health staff have and are continuing to make as Covid infection rates rapidly rise again.”

Chief executive of the RCN, Pat Cullen, said the announcement was “light on detail” and that nursing staff would “remain dignified in responding to what will be a bitter blow to many”.

“But the profession will not take this lying down,” she warned.

In making the final decisions on pay the government will have factored in the impact of the pandemic on both the economy and the NHS.

Currently almost half the NHS’s budget goes on staffing costs – a total of £56.1bn.

In theory, the pay-review bodies make recommendations for NHS staff across the UK – but it is up to the individual UK nations to decide whether to accept them.

In Scotland, most NHS staff have already been offered a 4% pay rise (backdated to December 2020). This follows a one-off Covid payment for health and social care staff of £500.