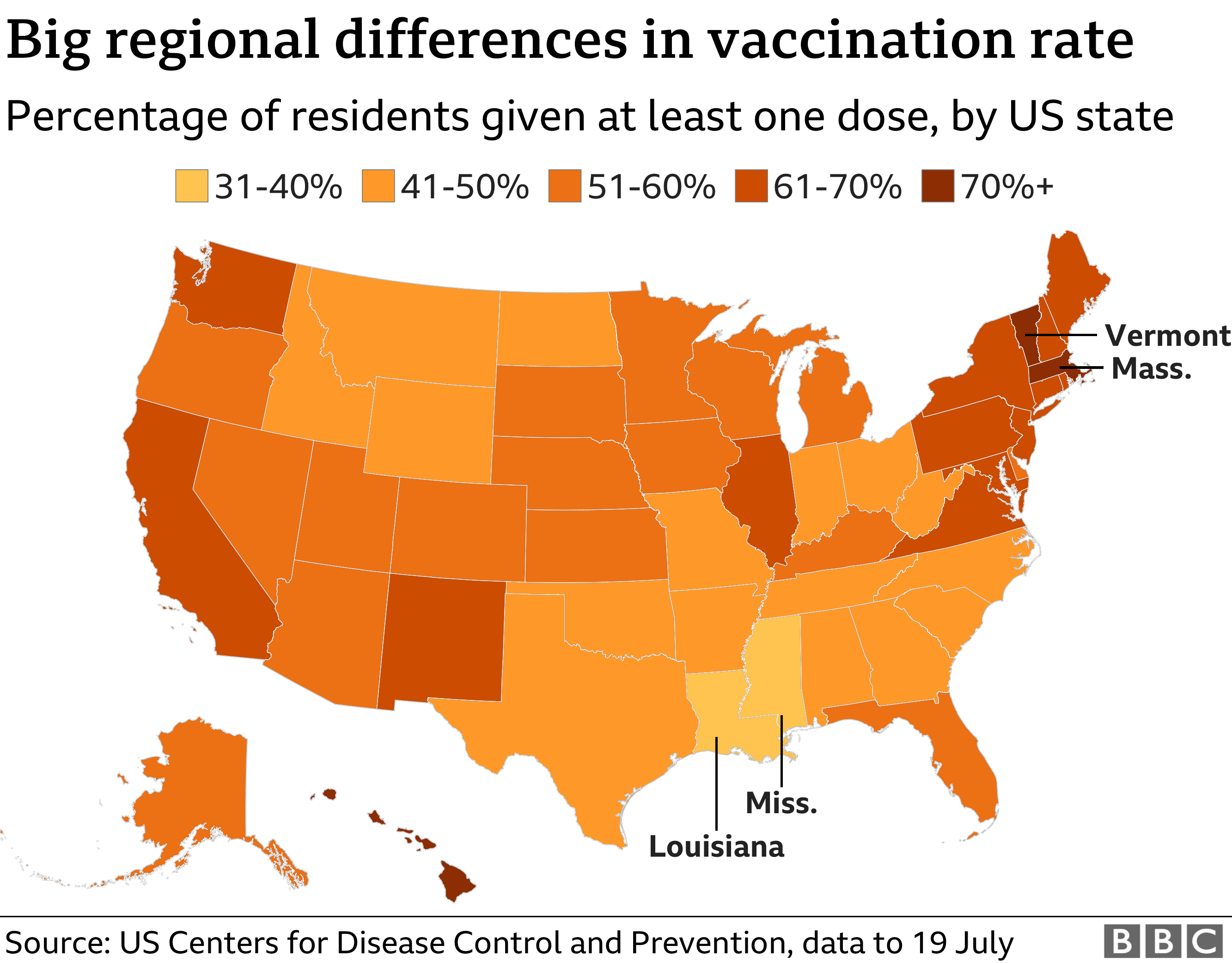 President Joe Biden is urging Americans to get jabbed as the country’s vaccination rollout slows down.

Infections are rising across the country, and in some states fewer than half of residents have received their first dose.

We’ve looked into where vaccinations are lagging, and why this might be.

Supply isn’t generally a problem in the US, and anyone over the age of 12 is eligible to receive an authorised vaccine.

But after being one of the world leaders in vaccine uptake until the middle of April, the US vaccination rate has slowed down.

The US now lags behind neighbouring Canada in terms of doses administered as share of total population, as well as the UK, Italy and Germany.

It’s still ahead of some other major economies, such as Japan, but the vaccination rate in the US is dropping off as it climbs elsewhere.

The US still hasn’t reached the target set by President Biden of 4 July for getting 70% of those over 18 vaccinated with at least one shot – currently around 68% of adults have received their first dose.

New infections have more than doubled in the US in the past month – and according to the US Centers for Disease Control and Prevention, the vast majority of new cases and deaths are among the unvaccinated.

What states are lagging behind?

States in the south of the US tend to have the lowest vaccine uptake.

Mississippi and Louisiana have the lowest – both with less than 40% of residents having received at least one dose.

North-eastern states tend to have among the highest vaccine uptake – with about 75% of people in Vermont and Massachusetts receiving at least one dose.

Professor Peter Hoetz, a vaccine expert at the Baylor College of Medicine, says: “It’s practically halted in the southern states – despite the widespread availability of the vaccine, we have a sharp divide.”

“In the southern states, and in the mountain west states, most of older adults are vaccinated but a lot of the younger ones are not – and that’s where the big gap lies.”

Data shows that in states such as Mississippi, Alabama and Louisiana, around 80% of people over 65 are vaccinated, but only around 40% of under-65s are.

In contrast, in Vermont and Massachusetts almost everyone over 65 has received at least one dose, as have almost 80% of those under 65.

Why has uptake slowed down?

In the middle of April, the US was administering more than three million doses a day, but it is now down to about 500,000 a day.

This is partly because there aren’t as many people to vaccinate – the UK has also seen its vaccination rate drop off, although not as rapidly as the US.

And the UK and other developed countries have typically reached a larger share of their population before their vaccination rate has dipped.

Experts say there is a lack of urgency among some healthy young people in the US, who aren’t in a rush to get a vaccine.

Concern about vaccine safety and resistance to the idea of having vaccines are also issues.

Dr Jennifer Kates, vice-president of the Kaiser Family Foundation, which monitors vaccine sentiment, says: “Some people raise safety concerns, and say they may be more likely to get vaccinated when a vaccine is fully approved vs just authorized.”

The vaccines used in the US are not yet formally approved, but have received emergency authorisation due to the urgency of the pandemic.

Dr Kates adds: “A persistent share of about 20% are hold-outs, who say they won’t get vaccinated at all, or only will if required by their employer.”

The Biden administration has blamed online misinformation in large part for the resistance to vaccines.

The White House surgeon general has said: “It’s one of several reasons why people are not getting vaccinated, but it’s a very important one, because of what we know from polls.”

We’ve reported on many examples of misinformation spreading online throughout the pandemic – such as the baseless theory that the vaccine is being used to microchip and track people.

A recent poll suggests some of these unfounded claims have taken hold – with one in five Americans believing the microchip theory.

Polling also suggests resistance to vaccinations is divided down political lines – with almost 30% of Republicans saying they will not get vaccinated, compared with just 4% of Democrats.

This would partly explain why vaccine uptake is lower in southern states, which are typically home to more Republican voters.

Prof Hoetz says: “The biggest reason from my perspective is defiance along a political divide.

“The messaging coming from conservative news outlets and conservative members of Congress is if you’re a young person you don’t need it because the death rates are low and vaccines are being used as an instrument of control by the liberals.”

But there are also access issues for some people.

Dr Kates says: “Despite supply not being an issue, there are still people who face barriers to getting vaccinated – not sure they can get time off work, lack of transportation, and the worry that they might have to pay.”

Federal rules say Americans shouldn’t have to pay anything for vaccines, regardless of their immigration or health insurance status.