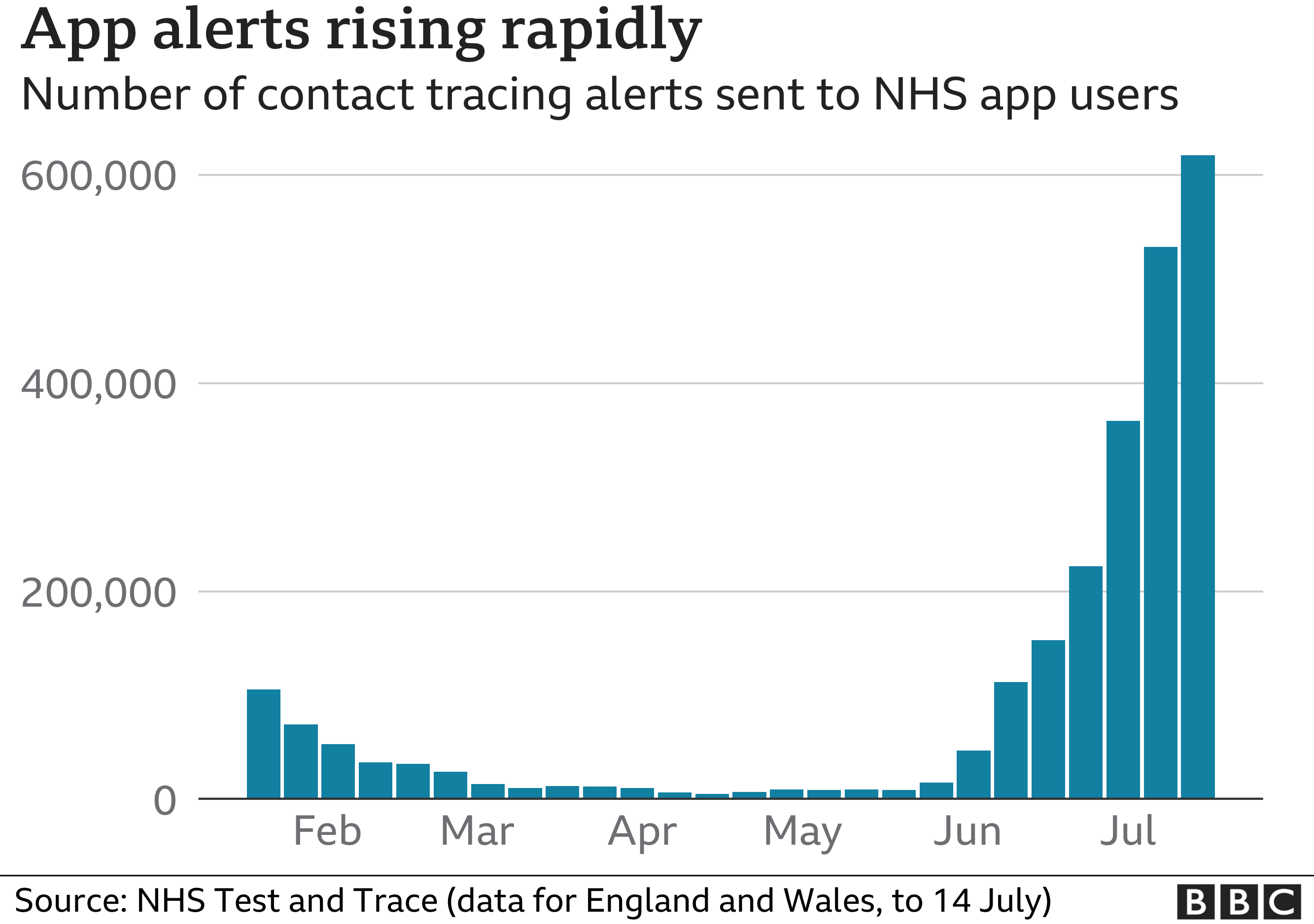 Supermarkets have warned the rising number of retail workers being forced to self-isolate is beginning to affect the availability of some products.

The Co-op said it was “running low on some products”, while Iceland said shops might have to be shut.

Sainsbury’s said it “might not always” have the exact products people wanted, but downplayed fears of shortages saying the problem was not widespread.

Iceland also urged shoppers not to panic buy, saying it was not necessary.

Business Secretary Kwasi Kwarteng said the government was “concerned about instances of shortages”.

“I don’t want people to get the impression that every shelf in every supermarket is bare – that is not the case but we are certainly concerned about instances of shortages, we are looking at the supply chains of critical industries and we are reviewing that situation,” he added.

Supermarkets and other sectors, including hospitality and transport, have said growing numbers of staff have been affected which means they have to self-isolate for 10 days. Some companies have reduced opening hours to cope with the staff shortages or shut parts of the business.

Firms want people who have been doubly vaccinated or have daily tests to be able to return to work.

Mr Kwarteng said that the government would publish guidance later on which sectors would be exempt, although he declined to comment on whether it would include the food industry.

Many of Thursday’s newspapers carried pictures of empty shelves in some supermarket branches – with some describing panic buying of certain items – but industry sources told the BBC that so far, food shortages were not a systemic problem.

It is understood that Tesco is experiencing low availability across a small number of products due to the rise in the number of workers self-isolating as well as the industry-wide shortage of HGV drivers.

Meanwhile, the Co-op said it was being hit “by some patchy disruption to our deliveries and store operations”.

“We are working closely with our suppliers to get re-stocked quickly,” it added.

It is understood that items such as soft drinks, personal care products such as deodorant and beer are worst affected.

Lidl said the rise in numbers of employees having to self-isolate was starting to hit operations, but it was working to minimise disruption.

Of these, 27% have tested positive for Covid, while 64% have been “pinged” by the NHS Covid app and told to isolate.

Iceland is recruiting 2,000 temporary staff to help with the shortages while the Co-op will take on 3,000 extra workers.

The British Retail Consortium (BRC) said the increasing number of workers being told to isolate was “putting increasing pressure on retailers’ ability to maintain opening hours and keep shelves stocked”.

A fall in the number of available HGV drivers, exacerbated by the rising numbers being forced to isolate, was also “resulting in minor disruption to some supply chains”, the BRC’s Andrew Opie said.

Meanwhile, the British Meat Processors Association said some members were seeing between 5% and 10% of their workforce “pinged” by the app.

But Mr Kwarteng told the BBC: “The rules are clear and I think they should be followed.”

The prime minister has said he does not want to extend the exemption too widely in order to limit the spread of the virus.