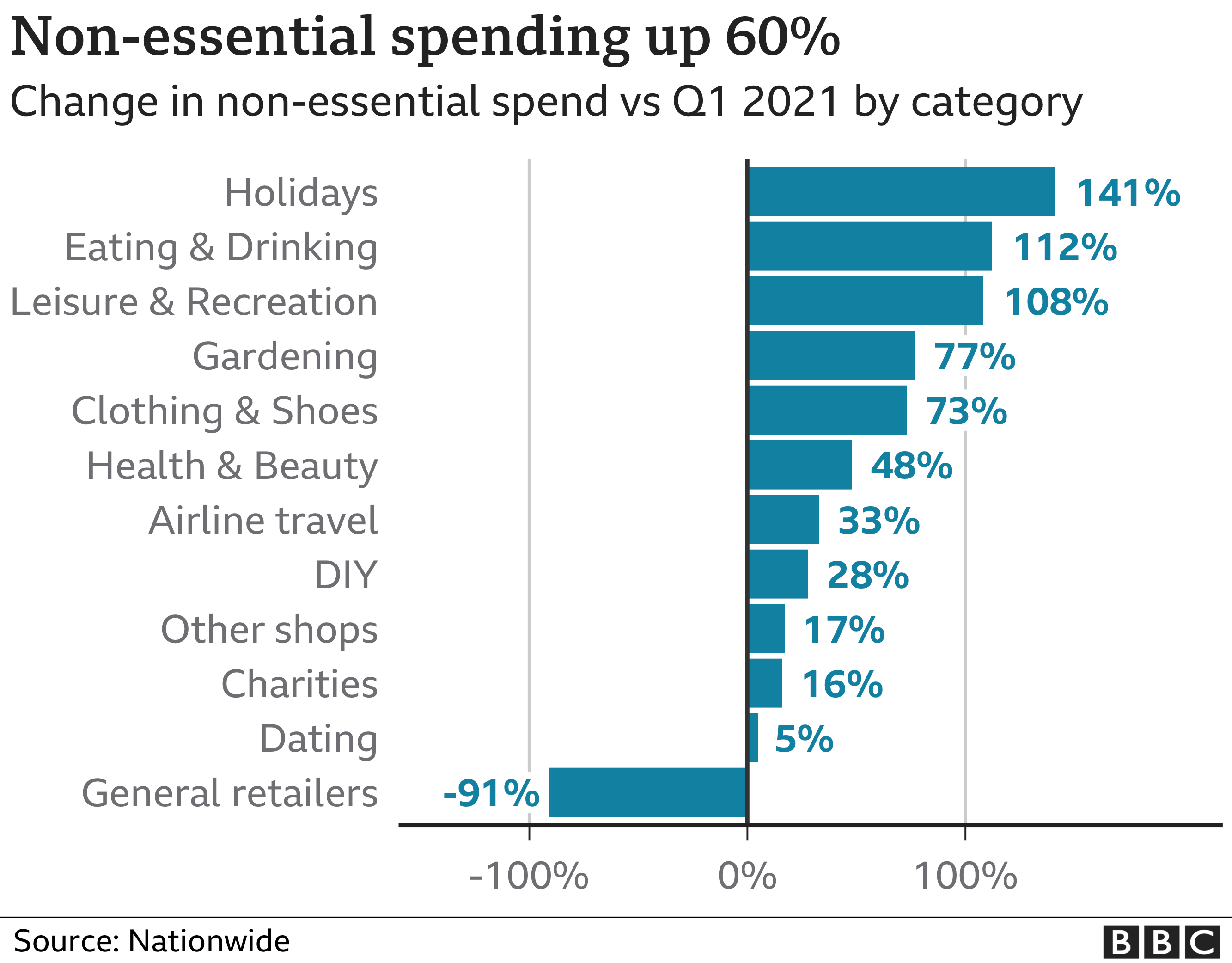 Britons spent more money on charity, dating and their pets as Covid restrictions continued to ease, according to data from Nationwide.

Spending on holidays, eating and drinking, leisure, gardening, and clothing also surged from April to June, the building society said.

However, spending fell in general retailers across the board.

The building society looked at hundreds of millions of transactions by its customers from April to June, and compared them with the previous quarter.

By far the biggest surge in spending was on holidays, including a massive increase in spending on UK campsites and caravan parks, as quarantine restrictions remained for many foreign destinations.

Spending on eating and drinking also surged to more than £1bn as restrictions on restaurants were lifted.

However, general retailers and department stores continued to be hit by the pandemic, with a massive 91% drop in spending by Nationwide customers.

However, there was a 16% increase in spending on charity – dwarfing the spending in department stores.

Charity shops saw a huge spike in spending when they were allowed to reopen on 12 April, with the British Heart Foundation alone taking £1m in a single day on that Monday, said Charity Retail Association’s chief executive Robin Osterley.

“There was a lot of pent up demand that continued on,” he said.

Sales at charity shops have continued to boom, ranging between 5% and 10% higher than two years ago.

During lockdown people had a chance to reflect on what they really needed, and so were donating after clear-outs, but they also had a think about how they wanted to spend their money, Mr Osterley added.

“It’s all part of people thinking: ‘There has to be a better way. We can’t go back to how we were [before the pandemic]’,” he said.

People who were in a financial position to make a choice were attracted by the sustainability aspect of buying from charity shops. They also liked the fact that their money was going to a good cause, he said.

There were also people who were struggling financially, and had to buy from charity shops to make ends meet.

There was also a surge in people looking for romance, as spending on online dating grew.

Between April and June people spent £3.8m, a rise of 5% from the previous quarter.

Britons also showed how much they loved their pets, splurging £124.5m on gifts and keeping them fed and healthy.

Millions of households bought new pets during the pandemic, prompting lawyers to say that couples should consider a legal agreement over who should get custody of the pet, in the event of a break-up.

But the biggest growth in essential spending was on public transport and taxis as restrictions eased in the second quarter, followed by motoring and fuel and car charging.

The ways that people paid for goods and services also continued to evolve.

Contactless payments, including via mobile phone, were already booming during the pandemic, and that growth continued in the second quarter.

Mobile payments were up 76%, while contactless card payments grew 46%. Payments were still dominated by debit cards despite slower growth, however.

Mr Nalder said that although the growth in contactless payments meant more convenience for many, he warned that a decline in cash use seen during the pandemic could become entrenched to the disadvantage of people who rely on it.