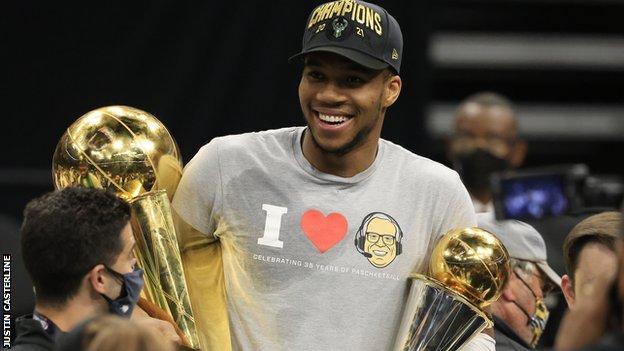 Here are just a few of the scenes so far.

These were the crowds who turned out to watch in the city on Tuesday night. More than 10% of the city’s population came together in the Deer District outside Fiserv Forum. There were 17,000 fans inside the Fiserv Forum and 65,000 outside.

Among the revellers inside the stadium was this guy, who has become a bit of a recurring character.

Giannis Antetokounmpo, who was crowned Finals MVP, scored 50 points in the decisive game six of the Finals to help the Bucks beat the Phoenix Suns 105-98.

As the game finished he headed straight towards his family to celebrate.

It got decadent in the Bucks’ dressing room afterwards.

Bobby Portis and Pat Connaughton struggled to account for how much champagne had been consumed in the celebrations.

To celebrate becoming only the seventh player to register 50 points in a Finals game, bringing the Bucks their first title in 50 years, Giannis took his trophy to a well-known fast food outlet and ordered exactly 50 chicken nuggets.

Some fans spotted him on the way.

Including one who got to touch the trophy.

Meanwhile, Jrue Holiday and family are not phoning it in.