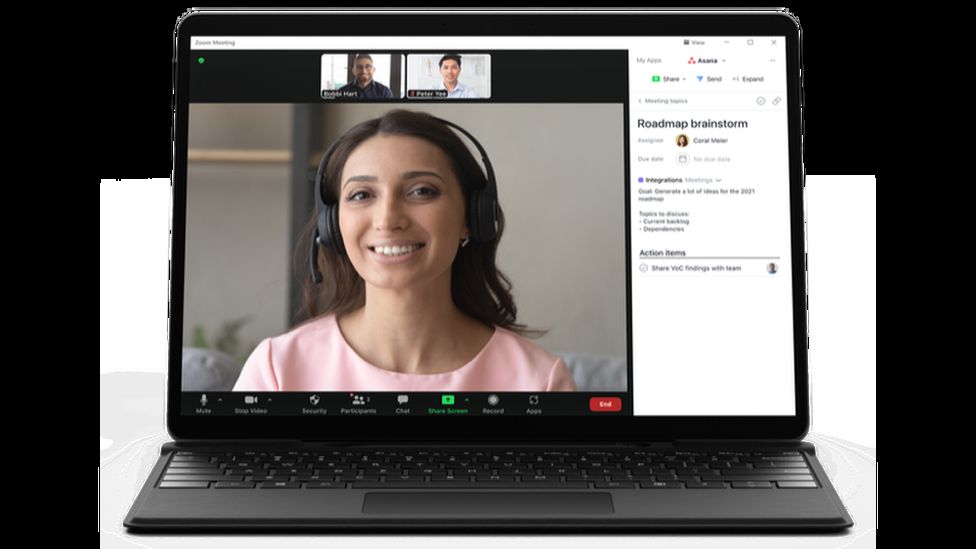 Zoom is integrating third-party apps into its video conferences, as it looks to stay ahead in the post-pandemic world.

It hopes that the addition of apps will “make meetings more engaging, more productive and actually even more fun”.

Zoom is betting on a future of hybrid working, and hoping to maintain its 300 million daily meeting participants.

Experts say it is also keen to compete with rivals such as Microsoft Teams.

Zoom already has a marketplace that has 1,500 apps, but they need to be downloaded and added to meetings separately.

At launch, 50 apps will be available, including meeting planning app Asana and Dot Collector, which allows for real-time feedback and polling.

In an interview with the BBC, Zoom’s product lead for Apps, Ross Mayfield, explained how he saw apps being used in Zoom: “Using apps for things like taking notes, whiteboarding, logging action items and managing your tasks to make you more productive.”

And beyond work he envisages apps “including video games, casual games, charades, board games, card games, things like that, as a way of playing with friends and family.”

He added: “Game developers are actually building games specifically for team-building exercises, icebreakers and kind of keeping that social connectivity in the changing world.”

It is not yet clear how much people will continue to use Zoom and similar video conferencing services as the world continues to ease lockdowns after the Covid-19 crisis.,

The firm, which saw exponential rise over the pandemic, recently announced a $14.7bn (£10.7bn) acquisition of Five9, a cloud-based call centre operator. It said it expected sales to rise more than 40% this year, reaching more than $3.7bn (£2.66bn).

Zoom chief executive Eric Yuan has previously said he is convinced that the post-pandemic world will continue to embrace a hybrid model of working.

Mr Mayfield reiterated that view: “The world we are returning to is a hybrid workplace, we’re to remain remotely connected with people, it’s not just going to be the same people in the same office doing the same things.”

He described what he called “the second chapter of Zoom” as the firm transforms “from a killer app to a platform that becomes embedded in a more useful way” in people’s lives.

Ben Wood, an analyst with CCS Insight, said of the move; “The battle of the video conferencing platforms is intensifying for Zoom, as Microsoft Teams continues to make incremental improvements.

“Having announced a slew of apps back in October 2020, Zoom is keen to add more value to the platform and app partnerships is a quick win that many users will appreciate.”