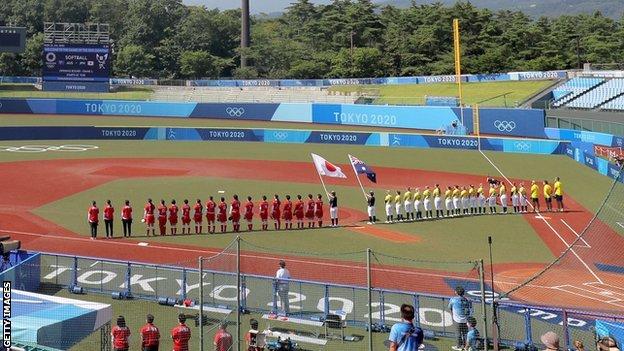 Action at the delayed 2020 Olympic Games finally got under way in Fukushima on Wednesday, with hosts Japan beating Australia 8-1 in their opening softball fixture.

Japan won gold when softball was last in the Olympics at Beijing 2008, and began with a convincing 8-1 victory in a match held two days before the official opening ceremony.

But the match took place in an empty Azuma Baseball Stadium and the Games begin amid widespread opposition in the country, with Covid-19 cases rising.

The arena in Fukushima was selected for the opening fixtures in softball and baseball – which also returns to the Games after a 13-year absence – in a boost for the area after the devastating earthquake and subsequent nuclear disaster in 2011.

Organisers had wanted to highlight the recovery of the area since the disaster, and to prove to potential tourists that Fukushima was safe to visit.

But with a state of emergency in place amid rising Covid cases, fans have been banned from attending all events.

Team Japan’s determination to retain their 2008 title was evident, with Minori Naito, Yamato Fujita and Yu Yamamoto all clearing the fence with home runs.

Australia had taken the lead in the first inning but Japan’s world-beating defence was too much for the visitors.

The world number two side have won golds at the past five Asian Championships and Asian Games, and silver at the 2018 World Championships.

Australia captain Stacey Porter said playing in the opening fixture at the Games was “pretty special”, but having no supporters in the stands would take some getting used to.

“No crowd was different. We’re used to looking up to the stands and seeing supporters up there, but we knew that they were watching from home.”

Pitcher Kaia Parnaby said there was still a “great atmosphere” even without the crowds present.

No crowds – but was there a bear watching?

There may have been no fans there but local media reported a furry intruder in the stadium before first pitch – an Asian black bear.

A security guard on a patrol said he spotted the animal during the night before the opening games and again the following morning.

He told the local police the bear was approximately one metre in length but disappeared before it could be captured and removed.

Sightings of bears are a common occurrence in Japan as they often venture into towns and villages.