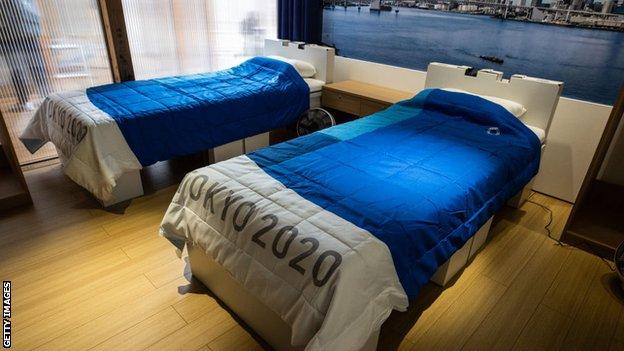 Ireland gymnast Rhys McClenaghan has been thanked for debunking the “myth” there may have been an ulterior motive to the cardboard beds in the Olympic village.

The Tokyo Games has prioritised sustainable measures. Its electricity will come from renewable sources, the Olympic torch was made using aluminium waste and the medals from recycled consumer devices.

However, there had been suspicion among athletes about the bed frames, which are made from recyclable cardboard.

Reports suggested they were made to collapse under the weight of more than one person to promote social distancing, despite manufacturers saying they would be able to support 200kg – more than what any athlete weighed at the 2016 Games.

American runner Paul Chelimo said on social media they were “aimed at avoiding intimacy among athletes”.

But Team Ireland’s McClenaghan, 21, has received thanks from the official Olympics Twitter account for challenging the rumours.

In a video in which he tests his own bed by jumping on it, McClenaghan said the suggestion they were constructed to “break at any sudden movement” were “fake news”.

“You heard it first from Team Ireland gymnast Rhys McClenaghan – the sustainable cardboard beds are sturdy!”

Two South Africa footballers became the first competitors to test positive for coronavirus in the athletes’ village in Tokyo over the weekend – five days before the start of the Games on 23 July.