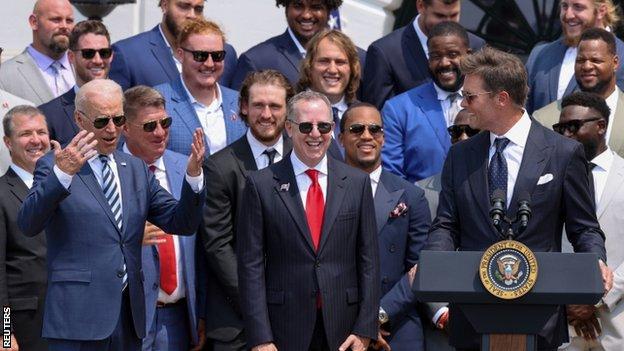 US President Joe Biden told veteran quarterback Tom Brady he was “just about the best ever to play” American football at the White House on Tuesday.

It was a record seventh win for Brady, 43, in his first season away from the New England Patriots.

The Pats were the last NFL champions to visit the White House when they were welcomed by Donald Trump in 2017.

US championship teams have traditionally had a reception at the White House but Trump cancelled the Philadelphia Eagles’ invite in 2018.

That was after several players said they would boycott the visit because of Trump’s criticism of taking a knee. Former Colin Kaepernick had started kneeling symbolically during the pre-game national anthem in the NFL in 2016, in protest against racial injustice in the US.

Biden succeeded Trump in January, becoming the oldest president ever elected, and the 78-year-old pointed out that in Brady and Bruce Arians, 68, Tampa Bay had the oldest quarterback and coach to win a Super Bowl.

“You won’t hear any jokes about that from me,” he said. “As far as I’m concerned, there’s nothing wrong with being the oldest guy to make it to the mountain top.

Arians and Brady praised the Bucs’ players and staff for regrouping after the team had a 7-5 record at the end of November.

Brady also alluded to the disputing of Biden’s election win by many Trump supporters.

“We found a rhythm, we got on a roll and not a lot of people think that we could have won,” said Brady. “In fact, I think about 40% of people still don’t think we won.”

“I understand that!” Biden replied.

Brady added that “we’re not going to throw the Super Bowl trophy this time” after doing so from one boat to another during Tampa Bay’s victory boat parade, and challenged the interns to a game on the White House lawn.

Brady and Bryan Glazer, one of the team’s co-owners, also presented the 46th president with a Bucs jersey featuring ‘Biden 46’, while Brady mentioned Tampa Bay’s loss to the Chicago Bears in October, when he forgot which down the Bucs were on.

“I lost track of one down in 21 years of playing and they started calling me ‘sleepy Tom’. Why would they do that to me?” he joked.