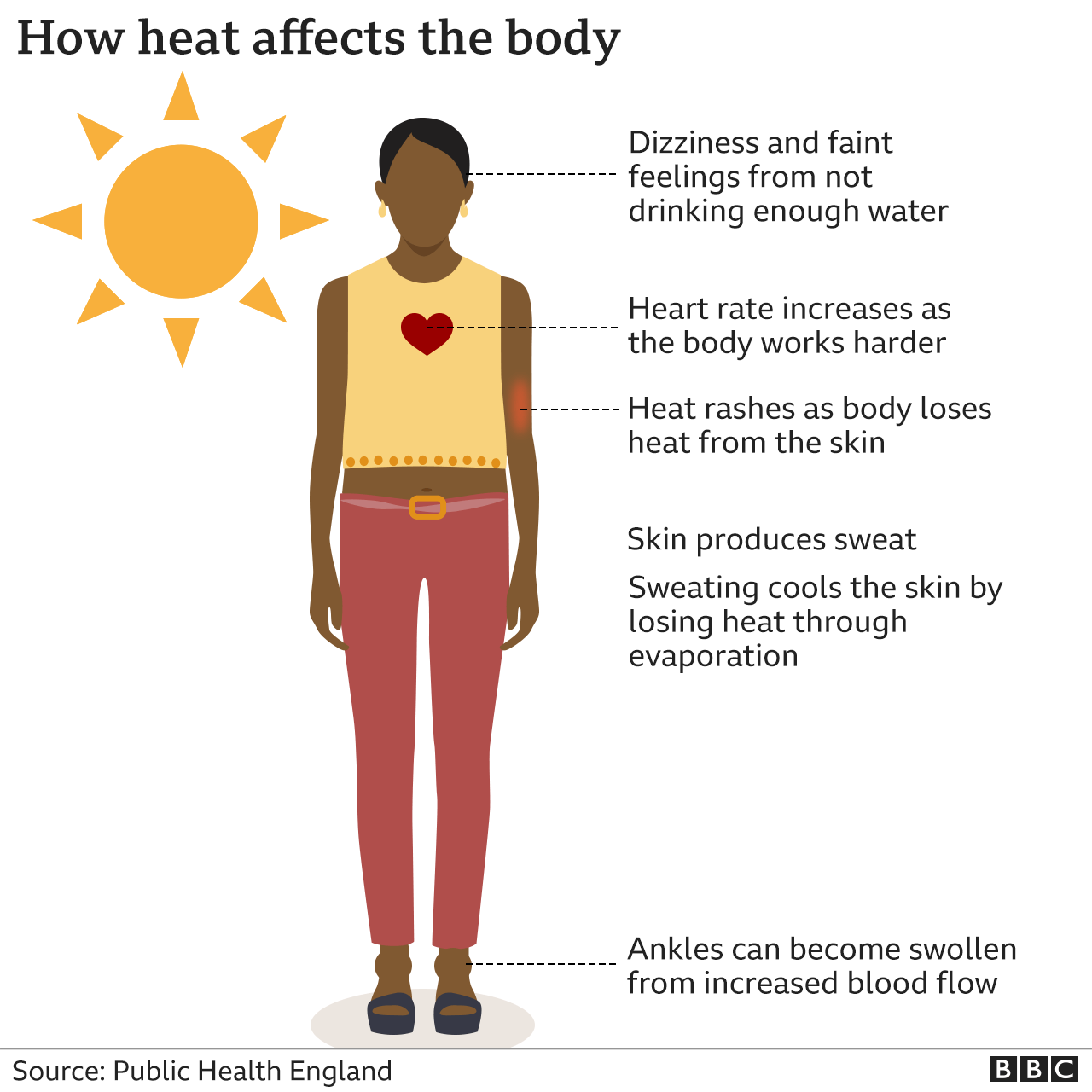 People have been told to watch out for sunburn and heat exhaustion after the Met Office issued two new-style extreme heat weather warnings.

With the hot weather set to last until Friday, here’s what you need to know about its effects on the body.

What does extreme heat do to our bodies?

As the body gets hotter, blood vessels open up. This leads to lower blood pressure and makes the heart work harder to push the blood around the body.

This can cause mild symptoms such as an itchy heat rash or swollen feet as blood vessels become leaky.

At the same time, sweating leads to the loss of fluids and salt and, crucially, the balance between them in the body changes.

This, combined with the lowered blood pressure, can lead to heat exhaustion. Symptoms include:

If blood pressure drops too far, the risk of heart attacks rises.

Why do our bodies react this way?

Our bodies strive to keep a core temperature of about 37.5C whether we’re in a snowstorm or a heatwave.

It is the temperature our bodies have evolved to work at.

But as the weather gets hotter, the body has to work harder to keep its core temperature down.

It opens more blood vessels near the skin to lose heat to our surroundings and starts sweating.

As the sweat evaporates, it dramatically increases the heat lost from the skin.

What should I do if I see someone with heat exhaustion?

If they can be cooled down within half an hour, then heat exhaustion is not normally serious.

However, if they do not recover within 30 minutes, then what follows is heat stroke.

It is a medical emergency and you should call 999.

People with heat stroke may stop sweating even though they are too hot, their temperature may pass 40C and they may have seizures or lose consciousness.

Who is more at risk?

Old age or some long-term conditions, such as heart disease, can leave people less able to cope with the strain heat puts on the body.

Diabetes can make the body lose water more quickly and some complications of the disease can alter blood vessels and the ability to sweat.

Children and those who are less mobile may also be more vulnerable. Brain diseases, such as dementia, can also leave people unaware of the heat or unable to do anything about it.

People who are homeless will also be more exposed to the sun. Those living in top-floor flats will also face higher temperatures.

Do some drugs increase the risk?

Yes – but people should keep taking their medication as normal and need to make more effort to stay cool and hydrated.

Diuretics – sometimes called “water pills” – increase the amount of water the body expels. They are taken widely, including for heart failure. In high temperatures, they increase the dangers of dehydration and imbalances in key minerals in the body.

Some drugs for epilepsy and Parkinson’s can block sweating and make it harder for the body to cool itself.

And other drugs such as lithium or statins can become more concentrated and problematic in the blood if there is too much fluid loss.

There are about 2,000 deaths caused by high temperatures in England every year.

Most of these will be heart attacks and strokes caused by the strain of trying to keep body temperatures stable.

The higher death rate starts to kick in once the thermometer passes 25C-26C.

However, the evidence suggests the deaths tend to be caused by higher temperatures in spring or early summer rather than “peak summer”.

This could be because we start to change our day-to-day behaviour as summer progresses and we get more used to dealing with the heat.

The evidence from previous heatwaves is the increase in deaths happens very quickly – within the first 24 hours of the heatwave.

How do I keep cool?

Make sure you’re drinking enough water or milk. Tea and coffee are also fine. The one to watch out for is excessive alcohol as it can increase the risk of dehydration.

If it’s hotter outside than inside your home, then you might be better off keeping the windows closed and the curtains drawn.