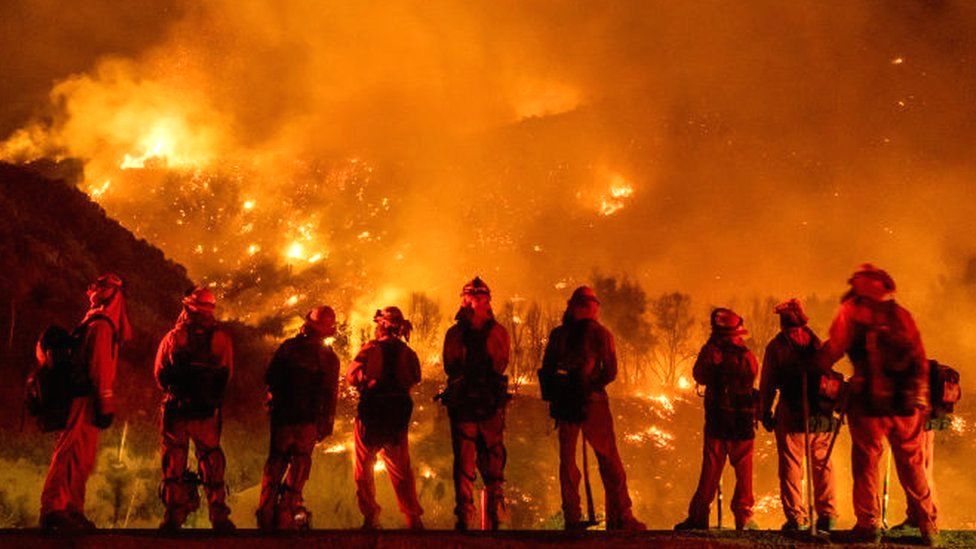 A US couple whose gender reveal party last year was blamed for starting a deadly California wildfire face up to 20 years in prison, officials say.

Refugio Manuel Jimenez Jr and Angela Renee Jimenez have been charged with several offences, including involuntary manslaughter, over the El Dorado fire.

Officials say a pyrotechnic device at the gender event last September sparked the blaze, in which one firefighter was killed and others were hurt.

The couple have pleaded not guilty.

The El Dorado fire spread over more than 22,000 acres in San Bernardino County, southern California, destroying homes and other properties.

The California Department of Forestry and Fire Protection, known as Cal Fire, alleged that a “smoke-generating pyrotechnic device” used during a gender reveal party on 5 September was the cause of the blaze.

The wildfire was eventually extinguished on 16 November.

Firefighter Charles Morton was killed tackling the blaze and several other firefighters were seriously injured.

On Tuesday, San Bernardino County District Attorney Jason Anderson said the couple who organised the gender reveal party had been charged with involuntary manslaughter and for “recklessly causing a fire” resulting in injury and damage to homes.

“Mr and Mrs Jimenez used a smoke bomb to reveal the gender of their pregnancy at the El Dorado Park in the city of Yucaipa, California,” he told a press conference, adding that they faced prison sentences “extending” up to 20 years if found guilty on all charges.

The couple are due to appear in court on 15 September.

Gender reveal parties are celebrations announcing whether expecting parents are going to have a girl or a boy.

They can include prediction games, with the “big reveal” being made with fireworks and coloured smoke grenades.