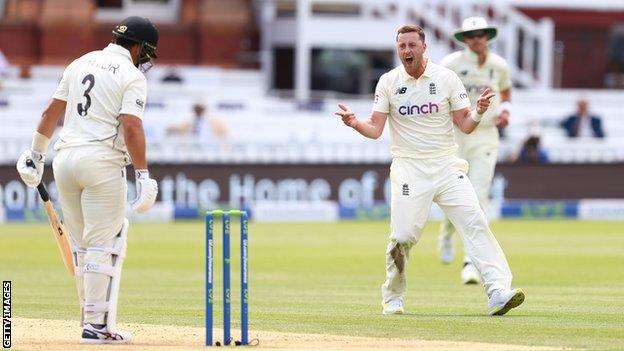 England have included bowler Ollie Robinson in their squad for the first two Tests against India next month.

Chris Woakes is out with a bruised heel and Jofra Archer is not ready to return following elbow surgery.

The first Test in the five-match series begins on 4 August at Trent Bridge.

Those selected will be available for their team’s first two matches in The Hundred, which starts later on Wednesday, before leaving to join the squad.

After discriminatory posts from 2012 and 2013 were revealed, Robinson was given an eight-game ban by an independent panel, five of which were suspended and the other three now served.

He returned match figures of 7-101 and scored 42 in his only innings against the Kiwis on debut.

“Ollie proved in that Test that he has the ability to replicate his outstanding form in the County Championship at international level and we will continue to work with him to develop his England career,” England coach Chris Silverwood said.

Stokes, who missed the New Zealand series with a fractured finger, returned ahead of schedule to captain England’s makeshift squad in three one-day internationals earlier this month but admitted he was playing through “ridiculous” pain.

Bairstow, 31, is recalled in place of James Bracey and is in the squad alongside fellow wicketkeeper Jos Buttler, with Ben Foakes sidelined by the freak hamstring injury – suffered when he slipped in the Surrey dressing room – that ruled him out against New Zealand.

It is hoped Woakes, 32, who has not played a Test since August 2020, will recover to play a part later in the series.

Robinson returns following his promising debut and a suspension for historical tweets.

With Archer and Woakes both unfit, he stands a good chance of playing at Trent Bridge

Stokes returns to Test cricket having led England in the one-day series against Pakistan – and with Curran and Buttler back, it will be an easier 11 to balance.

It is a big squad to cover the threat of Covid so the key decisions, such as the top of the batting order, have still to be made. Burns, Sibley, Crawley and Hameed, and possibly Bairstow, are in contention for three spots.