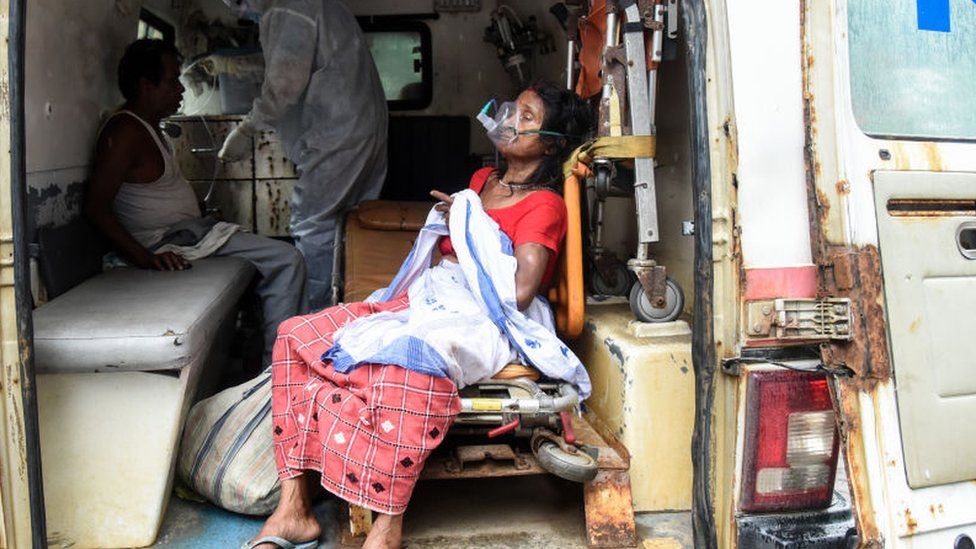 Indians have expressed shock and anger after a junior health minister told parliament that no Covid deaths had been reported due to oxygen shortages.

Hospitals across the country ran out of oxygen in April and May during a deadly second wave – there were daily reports of people dying from a lack of oxygen.

But the government said on Tuesday that “no deaths due to lack of oxygen has been specifically reported by states”.

India has reported more than 418,000 Covid deaths so far.

And more than half of those happened after 16 April when Covid cases began to climb sharply.

Dr Gautam Singh, who runs a 50-bed hospital in Delhi, told the BBC that there was an acute shortage of oxygen in April and May. “We were managing oxygen on an hourly basis. We came so close to losing patients. Somehow we begged and borrowed to save our patients. But I do know other hospitals that lost patients due to the shortage.”

India’s health infrastructure began to crumble as the demand for hospital beds, oxygen and medicines soared. Social media was flooded with desperate pleas for help from both families and doctors as patients gasped for breath. The trauma was on vivid display day after day and made global headlines.

So, the government’s statement that it had no data on oxygen deaths has angered and shocked Indians.

We were all begging for oxygen. An insult to the pain and suffering to hear the government say no deaths due to shortage of #Oxygen.

“Health is a state subject. Detailed guidelines for reporting of deaths have been issued by the central health ministry to all states and Union Territories,” said Bharati Pawar, junior minister for health and family welfare in Prime Minister Narendra Modi’s government

She added that they had not received any reports about deaths due to the oxygen shortage.

Ms Pawar was answering a question raised by opposition MP KC Venugopal in the Rajya Sabha (the upper house of parliament) on “whether a large number of Covid patients died on roads and hospitals due to acute shortage of oxygen in the second wave?”

People appeared furious and hurt that the government was relying on a technicality – that states had not reported any deaths “specifically” from a lack of oxygen – and not acknowledging the horrific reality that so many families faced.

All those desperate days & nights, begging for oxygen, making thousands of phone calls to random numbers to check if they have oxygen. Such horrible times. And govt says no one died due to oxygen shortage. What an insult, such mockery by BJP antiNationals! #OxygenShortageKilledUs

My cousin was among those who died because the hospital ran out of oxygen. There are countless stories like mine. My phone still has helpless texts asking for oxygen cylinders and beds.

To everyone who worked tirelessly to help people get oxygen, to social media and citizens that came through, and to those who lost their loved ones….

This is to wish you nothing but love and strength, and acknowledge your efforts and your struggle.

The BBC and other media reported extensively on the oxygen shortage in hospitals, including in major cities such as the capital, Delhi. In one prominent Delhi hospital, at least 12 patients, including a doctor, died when it ran out of oxygen on 1 May.

Many hospitals were relying on daily supplies. It was worse in small hospitals that didn’t have storage tanks and had to rely on big cylinders. Images of people queuing up to fill oxygen cylinders soon became a familiar sight.

“It’s a battle we are fighting every day,” Dr Gautam Singh told the BBC at the time. “Half of my hospital staff are on the road with cylinders to get them filled every day, going from one place to another.”

India’s government has previously come under criticism for major gaps in its Covid data – experts say the case counts and deaths are both severely under-reported.