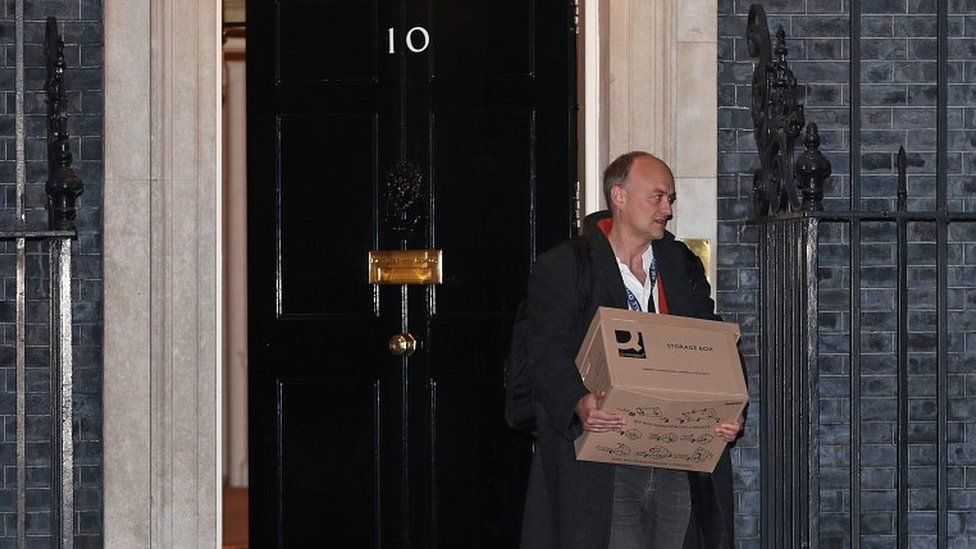 Boris Johnson was reluctant to tighten Covid restrictions as cases rose last autumn because he thought people dying from it were “essentially all over 80”, Dominic Cummings has claimed.

He also said the prime minister had messaged him to say: “I no longer buy all this NHS overwhelmed stuff.”

Mr Johnson had wanted to let Covid “wash through the country” rather than destroy the economy, Mr Cummings said.

The claims came in an interview with BBC political editor Laura Kuenssberg.

It is the first time Mr Cummings – Mr Johnson’s former chief adviser – has given a one-on-one TV interview during his career in politics.

In response, Downing Street said the prime minister had taken the “necessary action to protect lives and livelihoods, guided by the best scientific advice” throughout the pandemic.

And the government had prevented the NHS “from being overwhelmed through three national lockdowns”, a spokesperson added.

In a wide-ranging interview, Mr Cummings also said that, near the start of the pandemic last year, Mr Johnson had wanted to keep his weekly face-to-face meetings with the Queen going – but he had to warn his boss that she might die if she caught coronavirus.

And he defended his controversial decision to drive to his parents’ farm in County Durham after the first lockdown started, but admitted he had not “come clean” about all the reasons behind it, including “security concerns” around his family home in London.

The claims made at that session were explosive, but he’s since been criticised for failing to provide the evidence to back up some of those assertions.

Dominic Cummings: The Interview will be broadcast in the UK on BBC Two at from 19:00 BST on Tuesday, and it will be available on BBC iPlayer and BBC Sounds

Covid cases dipped last summer but began to rise rapidly again as autumn started, prompting a debate within government about what measures were needed.

The prime minister had “parts of the media and Tory party screaming” not to increase restrictions and “always referred” to the Daily Telegraph, for which he had previously written a column, as “my real boss”, Mr Cummings said.

On 13 October, with Covid deaths having risen to more than 100 a day, Labour leader Sir Keir Starmer called for a “circuit-breaker” lockdown of two to three weeks, but the government decided against this.

In a WhatsApp message sent on 15 October, shared with the BBC, Mr Johnson appears to have described himself as “slightly rocked by some of the data on Covid fatalities”.

The “median age” for those dying was between 81 and 82 for men and 85 for women, the prime minister allegedly wrote, adding: “That is above life expectancy. So get Covid and Live longer.

“Hardly anyone under 60 goes into hospital… and of those virtually all survive. And I no longer buy all this NHS overwhelmed stuff. Folks I think we may need to recalibrate… There are max 3m in this country aged over 80.”

He reportedly went on to write: “It shows we don’t go for nationwide lockdown.”

But the prime minister announced a four-week lockdown for England on 31 October, saying this was needed to protect the NHS as figures suggested deaths could reach “several thousand a day” without “tough action”.

Looking back to the start of the pandemic, Mr Cummings told the BBC he had intervened to stop Mr Johnson continuing to see the Queen, then aged 93, for weekly face-to-face meetings.

Mr Cummings claimed that, on 18 March last year, the PM had said: “I’m going to see the Queen… That’s what I do every Wednesday. Sod this. I’m going to go and see her.”

“You can’t go and see the Queen. What if you go and see her and give the Queen coronavirus? You obviously can’t go.”

He continued: “I just said, ‘If you give her coronavirus and she dies, what are you going to [do]? You can’t do that. You can’t risk that. That’s completely insane.’

On 27 March last year, four days after the first lockdown began, Mr Cummings drove his wife and son from London to his parents’ farm in County Durham.

While staying there, he made a 30-mile road journey to Barnard Castle on 12 April, which he later said had been to test his eyesight before the 260-mile drive back to London.

When these details were revealed they provoked huge anger – and accusations of double standards at a time when the government had banned all but essential long-distance travel.

In his BBC interview, Mr Cummings said that, during the Barnard Castle trip, he had been trying to work out “Do I feel OK driving?”

He also said he had decided to move his family to County Durham before his wife fell ill with suspected Covid because of security concerns over his home in London.

Asked why he had given a story that was “not the 100% truth” when he held a special press conference in the Downing Street rose garden on 25 May, Mr Cummings admitted that “the way we handled the whole thing was wrong”.

“What I should have done is either just resigned and said nothing about anything,” he said, “or I should have spoken to my family and said, ‘Listen, we’re just gonna have to come clean about the whole thing.'”

Mr Cummings was repeatedly challenged throughout the interview to back up his version of events.

He says many of his claims will be corroborated if there is a public inquiry.

A Downing Street spokesperson said: “Since the start of the pandemic, the prime minister has taken the necessary action to protect lives and livelihoods, guided by the best scientific advice.

“The government he leads has delivered the fastest vaccination rollout in Europe, saved millions of jobs through the furlough scheme and prevented the NHS from being overwhelmed through three national lockdowns.

“The government is entirely focused on emerging cautiously from the pandemic and building back better.”