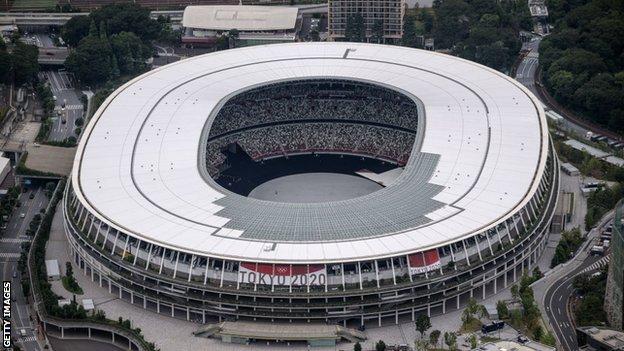 Rescheduling the Tokyo Olympics “caused sleepless nights” but must go ahead “to give hope” for the future, says International Olympic Committee president Thomas Bach.

Bach says cancellation “was never an option” despite the difficulties involved in hosting the event amid the Covid pandemic.

The opening ceremony for the delayed 2020 Games is on Friday.

“Cancellation would have been the easy way for us. We could have drawn on the insurance that we had at the time and moved on to Paris 2024.

“But in fact, cancellation was never an option for us.

Toshiro Muto, the head of the Games organising committee, did not rule out a late cancellation of the event if there is a surge in Covid-19 cases.

Muto said he would keep an eye on infection numbers and hold discussions with organisers if necessary.

‘Nobody had ever done this before’

The Olympics and Paralympics were postponed for a year in March 2020 because of the coronavirus pandemic, the first time in the Olympic Games’ 124-year modern history that they have been delayed.

Bach admits the unprecedented decision created serious doubts as to whether the Games could go ahead all.

“I can admit that we did not know how complex this would be,” he said in a speech to mark the start of the 138th IOC Session in Tokyo.

“There was no blueprint. Nobody had ever done this before.

“Over the past 15 months, we had to take daily decisions on very uncertain grounds. We had doubts every day. We deliberated and discussed. There were sleepless nights. Like everyone else in the world, we did not know, I did not know, what the future would hold.

“Imagine for a moment what it would have meant if the leader of the Olympic movement, the IOC, would have added to the already many doubts surrounding the Olympic Games. It would have poured fuel on to this fire.

“Our doubts could have become a self-fulfilling prophecy. The Olympic Games could have fallen to pieces. That is why we had to keep these doubts to ourselves.

“We did it together. We did it for the athletes.”

Organisers have warned overseas athletes, officials and journalists attending the games against visiting restaurants that open after 8pm or serve alcohol, citing concerns over the possible spread of Covid-19.

Japan has declared a state of emergency for Tokyo that will run through its hosting of the Games and public concern has grown over what impact the influx of tens of thousands of attendees could have on infection rates.

Japanese media have reported cases of people accredited for the Games drinking in Tokyo’s downtown areas or violating quarantines.

“Even after your first 14 days in Japan, this will be perceived as visiting a business that operates illegally and could constitute a grave reputational risk to yourself, your organisation, and the Tokyo 2020 Games,” organisers said in a note sent to Covid-19 liaison officers responsible for ensuring the participants follow the protocols.

Meanwhile, Czech beach volleyball trainer Simon Nausch is the third member of the Czech delegation to test positive for Covid-19, bringing the total number of positive cases to 71.

Beach volleyball player Ondrej Perusic recorded a positive test on Monday, two days after a staff member had tested positive following their arrival in Tokyo on a charter flight from Prague.

Nausch and Perusic have both left the Olympic village to isolate.