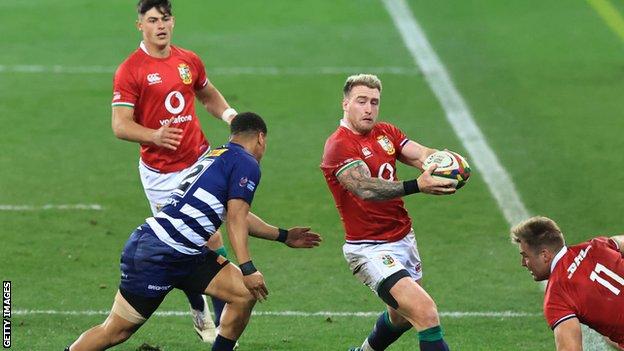 Stuart Hogg says the disappointment of leaving the 2017 British and Irish tour to New Zealand with injury has made him “focused” on success in South Africa.

The Scot, 29, says he was “rocked” by his experience in New Zealand and lost his passion for the sport.

“I tried to get involved and play again but I just felt like any time I would get fit, I would pick up another injury.

“I had never been in that situation before and the love of the game had gone, which all started from the fractured eye socket and missing out on those massive games.

“Going into that tour, I was probably playing some of the best rugby I had played. I felt at the time, if there was ever an opportunity for a Test match, that was it.”

Hogg has since won the Premiership and the European Cup with Exeter Chiefs, but he says the “bitter disappointment” of 2017 has fuelled his ambitions on this tour.

“The mind has really focused on being back here and having an opportunity to be involved in a Test match,” he added.

“If I get an opportunity at the weekend, then brilliant, but if I don’t, then it’s not been through the lack of trying.”

Lions head coach Warren Gatland will publicly name his starting XV for the first Test on Thursday, but Hogg says he is “bricking it” about selection, with the players expected to be told sooner.

“It’s a nervy old time but this is why we are all here,” admitted Hogg.

“We are all here for the same purpose – to be involved in a successful tour – and these are the games that count. There are 80-odd people on this tour and everybody has a role within this team.

“There will be some boys that are disappointed but we will all try to make sure the team will be successful on Saturday.

“I’m absolutely bricking it about this squad announcement.”

Despite not yet knowing what role he will play in the first Test in Cape Town on 24 July, Hogg says he “absolutely loved” captaining the side for last Saturday’s 49-3 win over the Stormers.

“Gats tried to catch me before the meeting to tell me I was going to be leading the team, but he couldn’t quite get it in on time,” said Hogg. “Then he announced it and I wasn’t sure if I was hearing it right.

“With the amount of quality and experience in the squad, to be named captain was a huge boost in confidence.

“I absolutely loved it and the challenges it came with it. I’m never going to be one that screams and shouts and I like to lead by the way I play.

“At times, I got it right, and at times, it didn’t quite go to plan, but I loved the opportunity and I’m very happy.”