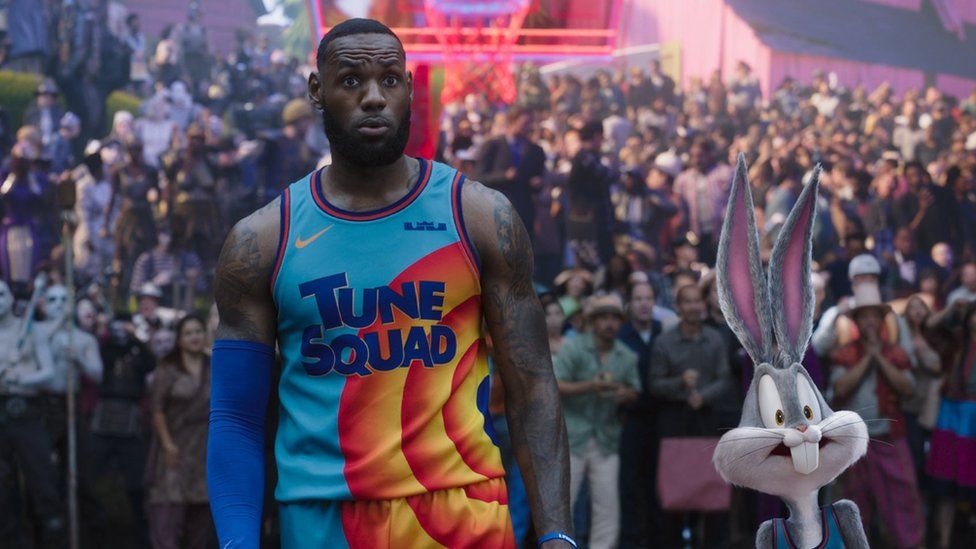 Space Jam: A New Legacy has proved a slam dunk by taking $31.6m (£23.8m) in its opening weekend to top the North American box office.

A joint streaming release, it sets a pandemic-era record for a family film.

The live-action/animated basketball film – a sequel to the 1996 original starring Michael Jordan – sees NBA star LeBron James team up with the Looney Tunes characters to save his son.

This extends to an on-screen a plotline that sees James inserted into the production company’s intellectual property library and tour a multiverse – run by an evil, all-powerful algorithm, Al G Rhythm – that doubly promotes their wider film roster.

“Granny and Speedy Gonzales (now just called Speedy) hang out in The Matrix, Yosemite Sam plays piano in Casablanca and Daffy Duck causes disasters that Superman has to stop” wrote Sam Thielman in his NBC review.

He adds this “manages to both promote and insult great movies and cartoons by trying to make them part of a crummy, half-hearted promotional multiverse based on the Warner Bros. Entertainment organization chart”.

The Guardian’s Simran Hans similarly said in her two-star review that James’ “natural charisma” is “bogged down… by distracting cameos”.

Posting in response to the criticism, James, who plays his real-life club basketball for LA Lakers, tweeted “Hi haters” alongside a grinning emoji and an article on its box office victory over Marvel’s summer blockbuster, Black Widow.

The superhero adventure, starring Scarlett Johansson as Natasha Romanoff, brought in $26.3m (£18m) in its second weekend. This marked a steep 67% decline from its $80m (£58m) inaugural sales that made it the highest-grossing post-Covid cinema release.

Also made available near-simultaneously on the Disney Plus streaming service as part of the company’s multi-platform release strategy to mitigate the pandemic, it collected an additional $60m (£43m) worldwide from subscribers.

However, the scale of subsequent drop-off will be of concern to Marvel studio bosses given its $200m (£145m) budget and raise questions over the viability of the dual release model, despite Disney’s initial positivity. `

Although it is normal for a film’s box office earnings to lessen considerably in its second week, particularly in the current climate, The Hollywood Reporter noted that Black Widow suffered one of the biggest drops ever for a Marvel title, and the worst among the Marvel Cinematic Universe films released by Disney. The film also still does not have a release date in China, a vital market for Hollywood.

Reacting to the collapse, a statement from the US-based National Association of Theatre Owners said it demonstrated the importance of maintaining an exclusive cinema release window. “An exclusive theatrical release means more revenue for all stakeholders in every cycle of the movie’s life,” it told Variety.

“The many questions raised by Disney’s limited release of streaming data opening weekend are being rapidly answered by Black Widow’s disappointing and anomalous performance”.

The BBC has contacted Disney for comment. The streaming figures for New Legacy have not been released by HBO Max.

The owners of the Odeon cinema chain, AMC, briefly threatened to boycott Universal’s movies last year before reaching an agreement. Warner Bros, meanwhile, heightened tensions when it announced its entire 2021 film slate would premiere on HBO Max and in cinemas on the same day.