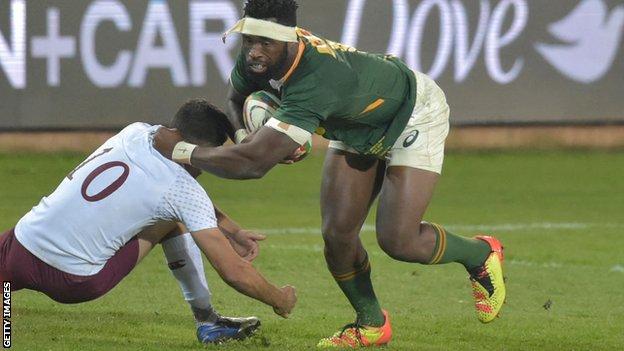 South Africa captain Siya Kolisi has recovered from Covid-19 to be named in the starting XV to face the British and Irish Lions in the first Test in Cape Town on Saturday.

Kolisi leads a side which includes 11 of the players who started the World Cup final win over England in 2019.

Handre Pollard will win his 50th international cap after being selected at fly-half.

“We know what the players selected can do,” said head coach Jacques Nienaber.

“The fact that most of the players participated in the Rugby World Cup means they know one another well on and off the field.”

Kolisi, 30, played in the win over Georgia on 2 July, but only joined up with the squad in Cape Town on Monday after having to self-isolate for 10 days.

Winger Makazole Mapimpi and prop Ox Nche will also start after completing their self-isolation periods and joining the squad alongside the captain.

“The forward battle is going to be as tough as it gets, so it’s important that we pitch up physically and ensure that we make our presence felt in the set-pieces and at the contact points,” added Nienaber.

“This, combined with their hard-running backs, will test our defensive system.

“But we have been looking forward to these matches since the Rugby World Cup concluded and we have done our homework, so it is a case of doing everything at 100% and sticking to our structures.”

The Springboks beat Georgia 40-9 in their first official warm-up game for the three-match series, while nine of the XV also started against the Lions for South Africa ‘A’.

The first Test will take place at the Cape Town Stadium on 24 July (17:00 BST), before the next two will be played at the same time in Johannesburg over the following two Saturday’s.

The Lions are expected to name their side to face the Springboks in the first Test on Thursday.