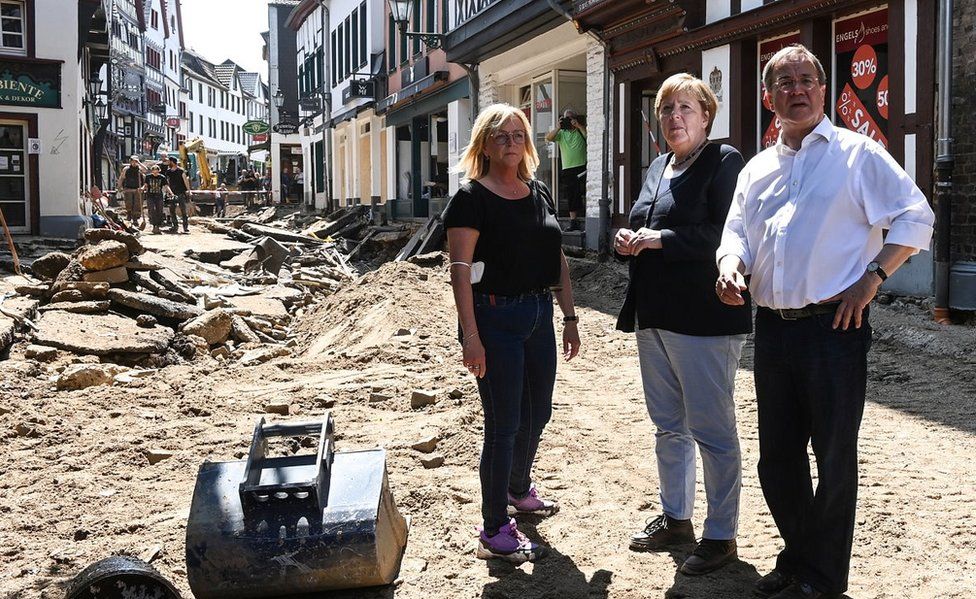 German Chancellor Angela Merkel has visited the devastated town of Bad Münstereifel and promised government aid within days, after what she described as the area’s worst floods in 700 years.

“The only thing that gives some comfort is the huge solidarity,” she told the stricken residents, many of whom were left homeless. Many donations and aid teams have arrived from other parts of Germany.

Chancellor Merkel warned that repairing the wrecked infrastructure – water pipes, phone lines and masts, roads, railway lines, bridges – would take many months. In power since 2005, she is not running again in the September election.

The 15 July deluge killed more than 160 people in Germany. It highlighted deficiencies in the storm warning system.

In Bad Neuenahr resident Ursula Schuch said “we have no water, no electricity, no gas.

“The toilet can’t be flushed. Nothing is working. You can’t shower… I am nearly 80 years old and I’ve never experienced anything like it.”

Belgium held a day of mourning on Tuesday for its flood victims – the death toll is at least 31. King Philippe and Queen Mathilde paid their respects at a fire station in flood-hit Verviers. There was a minute’s silence and sirens sounded across the country.

All photos are subject to copyright.