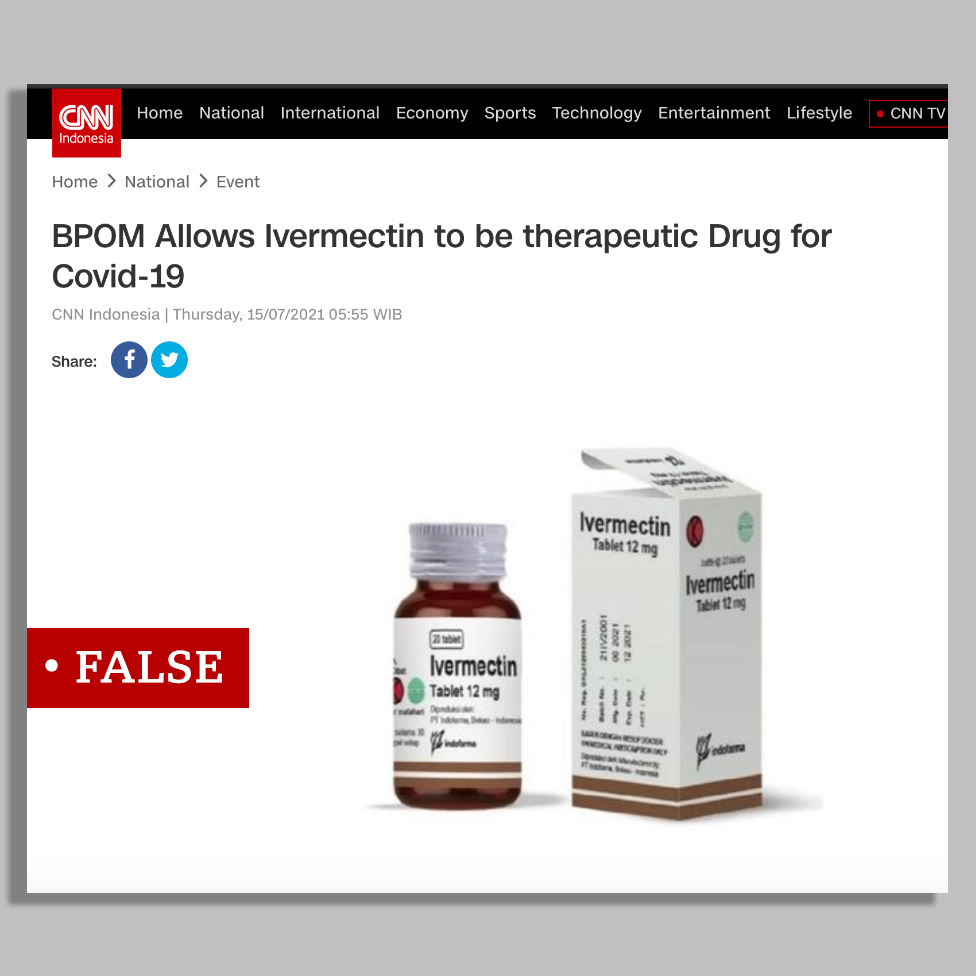 With the surge of the Delta variant in Indonesia, misleading claims about products claiming to be cures and preventions are on the rise.

Hospitals are struggling to cope with soaring numbers of patients and shortages of oxygen, and people are increasingly desperate to get help for sick family or friends.

We have looked at some examples of health misinformation being shared.

1. Claims that an anti-parasite drug has been approved

There have been growing numbers of Indonesians sharing claims about using the anti-parasitic drug, Ivermectin.

But the drug is still undergoing trials, and is so far unproven as a cure for Covid.

The reports were based on a 15 July statement issued by the Food and Drugs Authority of Indonesia (BPOM).

But shortly afterwards, BPOM’s head, Penny Lukito, told local media that no emergency approval had been given to Ivermectin.

The confusion arose because the medicine was put on a list together with other drugs, two of which did have emergency approval.

Ms Lukito explained that Ivermectin was included because it’s undergoing clinical trials at eight hospitals, but the results are not expected until October and no approval has been given so far.

Ivermectin was already being promoted as a treatment by some public figures, despite the World Health Organization’s (WHO) warning that it should be used only under certain clinical settings.

Health practitioner Reza Gunawan has been promoting Ivermectin on his Twitter account, where he has more than 350,000 followers.

When we asked him why he was doing this, he replied: “Ivermectin is relatively safe, low cost, effective, fast and easy to implement, and can complement the ongoing vaccination programme.”

He added that he is not a medical doctor.

The manufacturer, Merck, has said that there is no scientific study as yet that proves Ivermectin works against Covid-19.

Dr Dicky Budiman, an epidemiologist at Australia’s Griffith University, has said it should not be used unsupervised, and that there could be “very serious side effects if it is not used under a doctor’s supervision”.

There are quite a few countries, including the UK, investigating it as a possible treatment.

This happened after claims emerged on social media and WhatsApp groups that drinking this brand of milk could produce Covid antibodies.

It is unclear where this claim originated, and there’s no evidence that drinking milk can produce Covid antibodies.

Nestle in Indonesia told the BBC that the company has never claimed their product can generate a Covid antibody response, which can only come from a vaccine or a previous infection.

Social media posts are being widely shared about a product called propolis, described as an immunity booster.

These have been circulating on Twitter and Facebook, with many claiming that the product helps protect you against Covid-19.

Propolis is a natural substance produced by bees and sold as an alternative remedy to treat inflammation or sores.

It has been certified for sale in Indonesia since 2018 as a traditional medicine and health supplement by the country’s food and drugs regulator.

“British propolis”, as it’s known in Indonesia, has an official Instagram account where claims have been made that it can help against viruses, but not specifically Covid-19.

However, one post we saw on the official account talks about consuming this product “in addition to wearing masks” and refers to “prevention from within by increasing the body’s resistance.”

There is no evidence that it does anything to prevent Covid infections.

We contacted the company marketing the product in Indonesia to ask them about it, but had received no response by the time of publication.

There’ve been lots of claims about “immunity boosters” during the pandemic, not just in Indonesia but in many other countries.

We asked Dr Faheem Younus, who is head of infectious diseases at the University of Maryland in the US and tackles health myths on his Twitter handle. about the claims you can prevent Covid this way.

He says the term “immunity booster” is very general, and there’s no evidence these substances work against Covid.

We’ve also seen claims being shared on social media around using other natural remedies against Covid in Indonesia.

For example, there have been suggestions that you should drink or inhale cajeput oil, a plant-derived oil usually used to treat skin irritations, to prevent coronavirus.

Again, this product is not shown to work against Covid-19.

The oil has properties similar to eucalyptus oil, and in fact if inhaled it could cause respiratory issues and prove to be harmful.