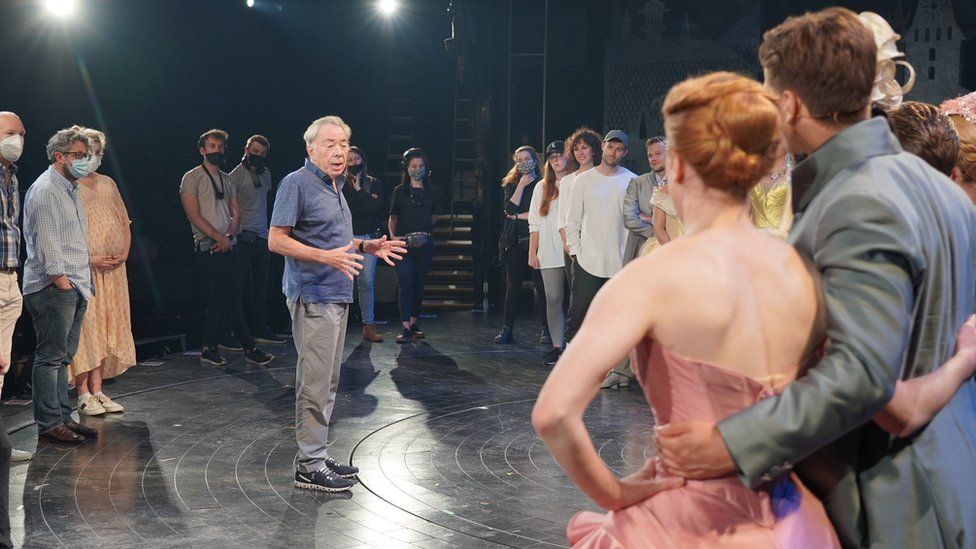 Andrew Lloyd Webber has said he is “heartbroken” after being forced to cancel Monday and Tuesday’s opening nights of his musical Cinderella.

The West End production has been halted by self-isolation measures after a member of the cast tested positive for Covid-19, he said in a statement.

That positive test had already led to two preview performances being scrapped on Saturday.

It’s not clear when the show will now open.

A spokesman for the production told the BBC: “It’s hard to see a route forward under the current rules, but we will do everything we can to come back.”

Lord Lloyd-Webber criticised the government in his statement, describing its isolation guidance as “a blunt instrument”.

On the same day that theatres and venues were allowed to open up fully again, free from Covid restrictions, he wrote: “Freedom Day has turned into closure day”.

The theatre impresario added that close contacts of the positive case had been given additional PCR tests, as had anyone due to perform on Monday night. All those tests came back negative.

“We have been forced into a devastating decision which will affect the lives and livelihoods of hundreds of people and disappoint the thousands who have booked to see the show,” said Lord Lloyd-Webber.

“Cinderella was ready to go. My sadness for our cast and crew, our loyal audience and the industry I have been fighting for is impossible to put into words.”

The BBC has asked the Department for Culture, Media and Sport (DCMS) for a response.

Cinderella opened last month with an audience capacity of 50% after Lord Lloyd-Webber rejected Prime Minister Boris Johnson’s offer for it to be included in the live events pilot scheme.

Actress Carrie Fletcher tweeted on Monday to say she was “completely and utterly gutted” at the news.

Michael Ball, currently starring in Hairspray in the West End, which recently had to scrap 10 of its performances due to a positive Covid test, tweeted his sympathy.

Actors’ union Equity said in a statement: “Due regard must be given by the government to the industry’s pleas to enable the opening of productions where it is safe to do so, and it must bring forward the planned changes to self-isolation rules.”

Equity has previously called for workers in the entertainment industry who have come into close contact with someone with Covid-19 to not have to self-isolate (unless they have tested positive themselves) from Monday, rather than the current planned date of 16 August.