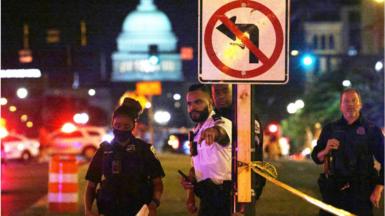 An operation is under way to rescue passengers submerged in waist-deep floodwaters on a subway train in China.

The passengers were travelling in Zhengzhou, in central Henan province on Tuesday, when they became stranded amid the rising water.

Henan province has been hit hard by heavy rain in recent days resulting in flooding that has affected more than a dozen cities.

At least one person has died and two are missing, state media report.

On Tuesday, Zhengzhou’s entire subway system was forced to close.

Video and images posted to social media show people standing on train seats to try to keep above the water.

It’s thought that rainwater poured into the underground tunnels and trains.

Emergency workers arrived at the scene at 20:35 local time (12:35 GMT) and were rescuing passengers one by one, the state-run People’s Daily reported.

It is not yet known how many people remain trapped in the train but some 300 people have been rescued so far.

One person who went by the name Xiaopei wrote a post on social media site Weibo begging for help.

“The water in the carriage has reached my chest. I can’t speak anymore,” they said.

Henan fire department later confirmed that Xiaopei had been rescued.

The water level in the train has dropped, local media report.

Henan province, home to 94 million people, has had an unusually active rainy season.

More than 10,100 people have been relocated since 16 July, according to state media.

The province’s meteorological station issued a red warning, the highest alert, for heavy rain on Tuesday.

Rains are set to continue in the region for the next 24 hours.

Zhengzhou recorded more than 200mm of rain in one hour on Tuesday.

A number of highways have closed and some flights have been delayed or cancelled.

In Dengfeng, an aluminium alloy plant exploded on Tuesday as water from a river surged into the factory, Reuters news agency reports.