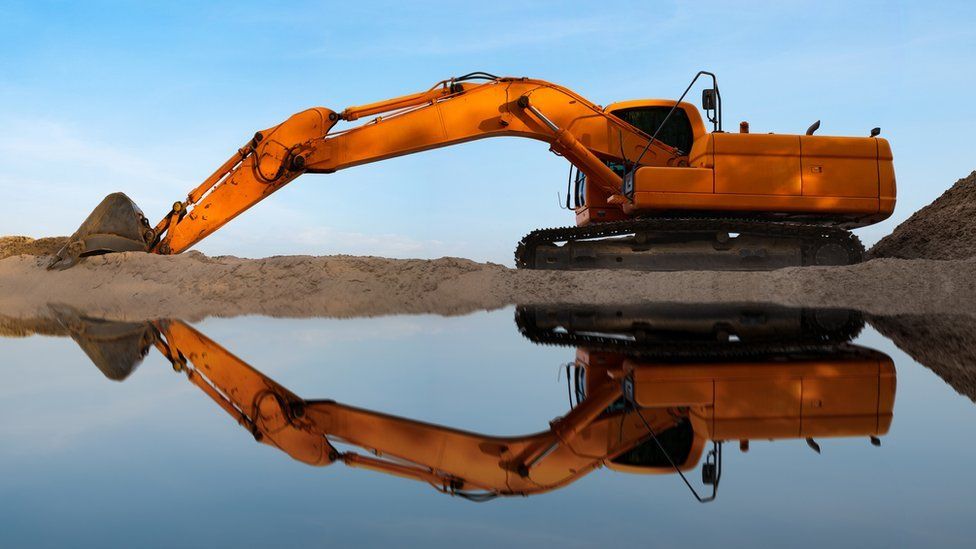 Does the world have a shortage of sand? At first, that might sound like a peculiar question.

After all, sand covers vast expanses of beaches and deserts across the world.

Yet the raw material is used in giant quantities in construction and manufacturing. In the building sector alone, 40-50bn tonnes of the stuff is used around the world annually.

This is led by the production of concrete, which is typically made up of about 25% sand.

The problem when it comes to supply is that most desert or beach sand is unsuitable – desert sand is too smooth, and beach sand has too much salt in it.

This means that sand is typically dredged from rivers, and due to the environmental damage this causes a number of countries have introduced bans in recent years – including India, Cambodia and Vietnam.

The knock-on impact has been supply issues in nations undergoing construction booms such as China and India, which have the largest and second-largest construction sectors.

Shortfalls of sand in India continue to fuel a big increase in illegal sand mining, controlled by criminal gangs, known as “sand mafias”, These groups have been linked to dozens of murders, including the 2015 killing of investigative journalist Jagendra Singh.

“People don’t comprehend, or it doesn’t strike them, that there is a shortage [of sand],” says Shobha Bhatia, a professor of civil and environment engineering at Syracuse University.

“The issue is construction. We are building cities and towns at an unprecedented pace,” she adds. “But many of us also don’t realize that sand is used for things like smartphone and TV screens, solar panels and other electric items,” she says.

To try to reduce the need for sand, a small but growing number of researchers are turning to technology and innovation in the hunt for alternatives.

These include Dr John Orr, a lecturer in concrete structures at Cambridge University. His research has found that plastic waste can be sorted, cleaned, shredded and crushed into a sand alternative for use in concrete.

He has looked specifically at the potential impact of the solution in India. Here the cost of sand has skyrocketed – while at the same time estimates suggest that 15,000 tonnes of plastic waste is dumped every day in the country.

“We found that you can replace up to 10% of the sand in concrete with the plastic, and it has the same strength and the same longevity,” says Dr Orr.

Unlike sand, plastic won’t stick to the cement paste around it, so it can only replace 10% of the raw material, he says. “But that still saves the need for a huge amount of sand, and helps to reduce the vast amount of plastic waste on India’s streets.

“From a cost perspective, using the plastic can be cheaper, broadly speaking, especially as sand goes up in price as it becomes more scarce. For countries like the UK this isn’t really an issue, as we don’t build much, but in nations with a construction boom, using plastic in concrete could grow in popularity.”

Dr Orr reckons that if using plastic in making concrete were adopted across India it could save 820m tonnes of sand a year.

At the same time, other research is being done into using other waste materials in concrete in place of sand, such as shredded old car tyres or ground-down glass.

Despite these innovations, Dr Orr and other experts warn against relying on them too much. Instead they point to changes in building design as a more viable long-term solution.

“Often, structures are overdesigned – they use too much concrete. This is a much bigger issue. Savings in concrete in the order of 30-50% are possible – and this [overdesign] occurs in the UK too,” he says.

His concerns are echoed by Vince Beiser, author of The World in a Grain: The Story of Sand and How It Transformed Civilization.

There are a lot of promising things happening to building design and manufacture, he says, “but nothing major is really happening at any kind of scale – lovely concepts but really tiny and very experimental”.

Among the other potential solutions, Mr Beiser explains, is an international certification body for sand similar to the Forest Stewardship Council, which certifies that wood comes from responsibly managed forests.

“There’s no reason we couldn’t do the same thing with sand. There could be some kind of body set up that says this sand was mined sustainably or didn’t cause too much destruction.”

Ultimately it will require a collective efforts from individuals, national governments and international organizations alike to significantly reduce global demand for sand, he says.

As an example of the actions individuals can take to help solve the world’s sand crisis, Mr Beiser notes that even a 10% reduction in the number of cars on the road – combined with increased usage of ridesharing or public transport – would have an enormous impact.

“That means 10% fewer houses that need to be built with garage and driveways, saving hundreds of tonnes of sand per house,” he says. “It also means that you can build parking structures 10% smaller – that’s millions of tonnes of concrete every year.”

However, Mr Beiser stresses that cutting demand for sand needs to be seen as part of a wider effort to reduce overconsumption of natural resources.

“We’re using up all the planet’s resources at a rate that cannot continue.”

“We should be looking for solutions that address the main problem – overconsumption of natural resources – rather than asking what one can do about sand, and then separately about climate change or traffic.

“A lot of these problems are interconnected and the solutions have to be as well.”