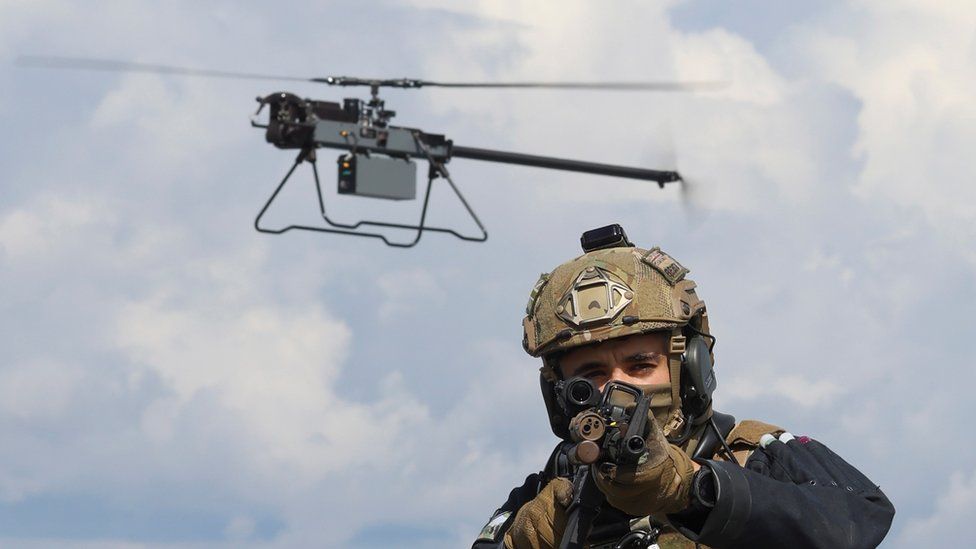 Swarms of military drones have accompanied Royal Marines both above and below the water in the Royal Navy’s first test of new combat technology.

Officers said “autonomous-advance-force” tests, of how humans and machines could work together, had seen “phenomenal” progress in recent years.

But the use of autonomous technology on the battlefield remains controversial.

“This is a very worrying development in the rush to develop autonomous weapons systems – weapons that once launched, select their own targets and apply violent force,” emeritus professor of artificial intelligence and robotics, at University of Sheffield, and co-director of the Responsible Robotics group Noel Sharkey said.

“While drones here were not armed yet, the UK is joining the international arms race with countries like the US, Russia, China, Israel and Australia.”

Another underwater drone, the Raydrive – based on the anatomy of a manta ray – was also being tested, to spy on enemy ships while “almost silent”, the Times reported.

The navy said it aimed to “embed autonomous systems on the front line”.

“Only by continued experimentation with the latest technology and innovation can we properly prepare our people for the challenges of the future,” he said.

Col Chris Haw, who led the tests, said: “We must always remember that this technology is there to enhance commando excellence, not to replace it.”

But Prof Sharkey said: “There has been a call to prohibit [autonomous weapons systems that can select and attack their own targets] at the [united nations] UN by thousands of scientists and [artificial-intelligence] AI companies, the director general of the UN, the International Committee of the Red Cross and 31 nation states and 186 [non-governmental organisations] NGOs from around the world.

“The UK has refused to support the ban, saying that they will never use such weapons.

“Yet it looks clearly like they are heading in that direction.”