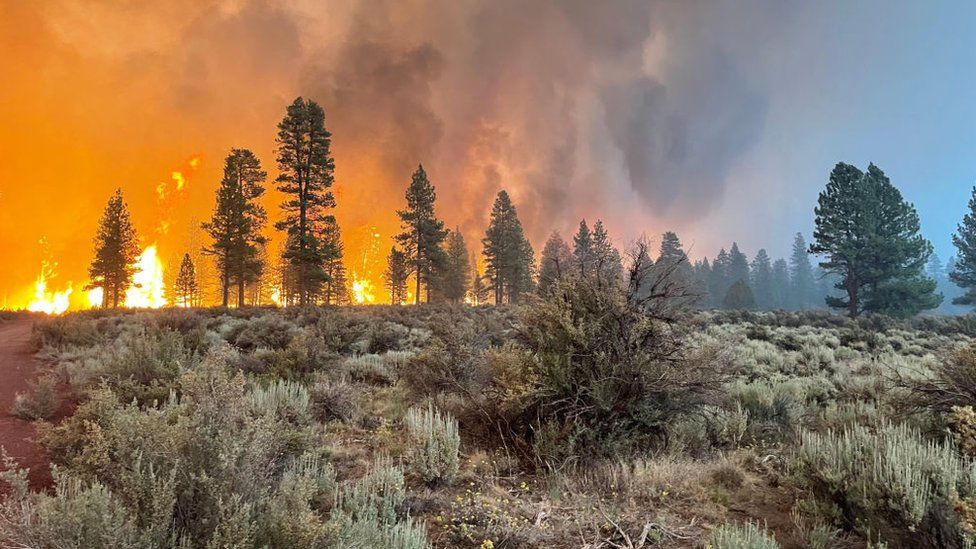 In the US state of Oregon, the nation’s largest active wildfire has burned through more than 300,000 acres, prompting thousands of evacuations.

The Bootleg Fire, already among the biggest in the state’s recent history, is one of more than 80 major blazes raging across 11 western states.

Fed by hot temperatures and erratic winds, the Bootleg has been burning since 6 July.

Wildfires have ravaged more than 1.1m acres in the US – mainly in western states – according to the National Interagency Fire Center.

As it continues to char southern Oregon’s forests, the Bootleg Fire has forced at least 2,000 residents from mostly rural areas to abandon their homes under expanded evacuation orders. At least 67 homes and 100 buildings have been destroyed so far.

As of Monday morning, the destructive inferno had burned more than 303,000 acres – approaching the size of Los Angeles – and is 25% contained, according to data from InciWeb, which tracks US wildfires. Over 2,100 firefighters are currently battling the fire.

This week’s forecast is unlikely to help containment efforts. Temperatures are expected to be between 10 and 15 degrees above normal and a drought is ongoing.

In Canada, more than 150 new fires started burning throughout the country during this past weekend alone, according to the Canadian Interagency Forest Fire Centre.

Scientists believe that climate change is likely to increase the chances of weather conditions that fuel wildfires.

Experts have told the BBC that due to a multi-year drought, the potential for a record-breaking 2021 North American wildfire season is “sky-high”.