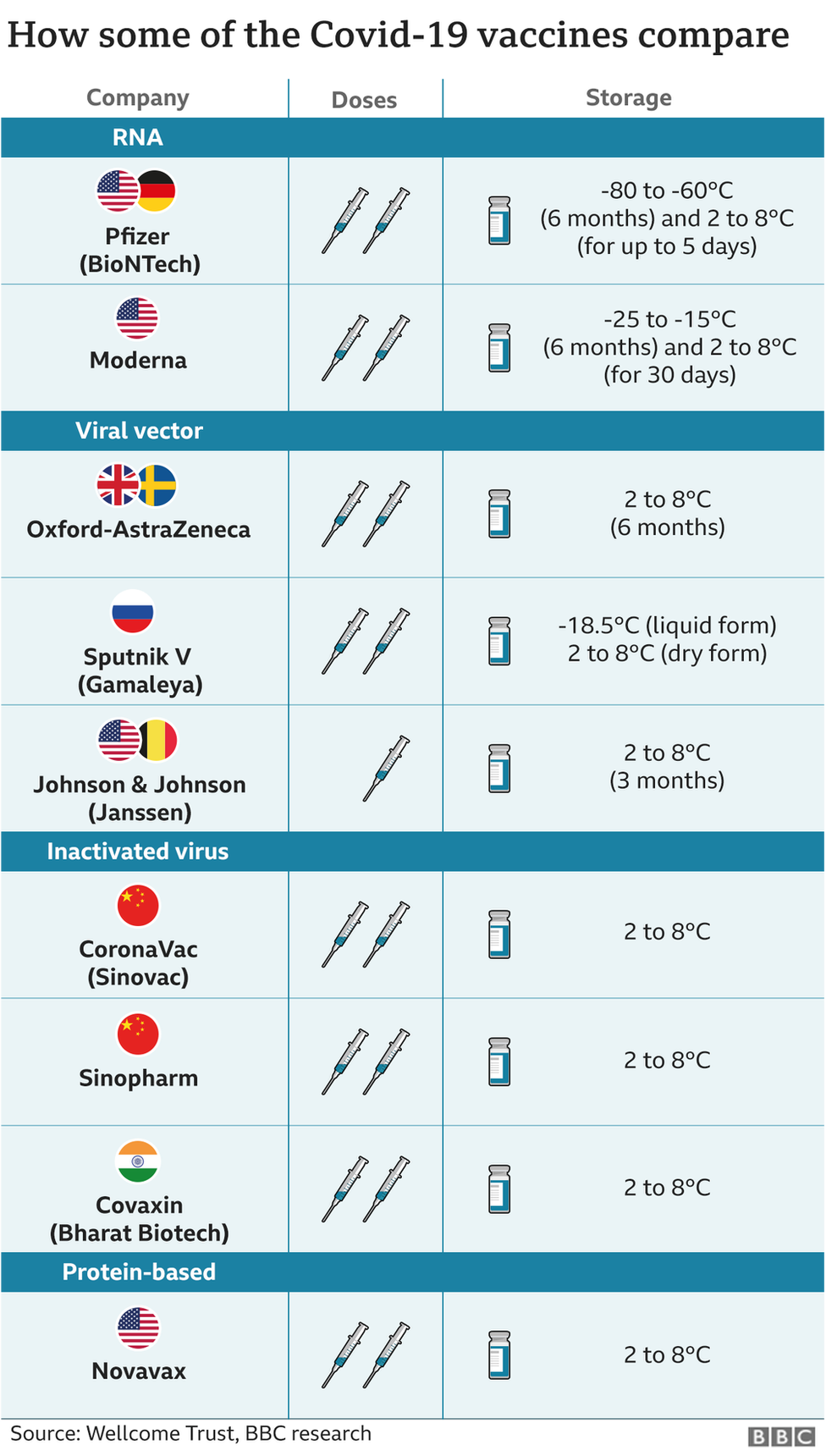 India has ramped up its coronavirus vaccine production amid a deadly second wave of infections that is now abating.

It is preparing to use a local version of Novavax vaccine, which will be produced by the Serum Institute of India (SII).

The vaccine was more than 90% effective in a late-stage US-based clinical trial, according to the company.

The government has also ordered 300 million doses of another vaccine from Indian firm Biological E.

India has so far given more than 260 million doses of three approved vaccines – Covishield, Covaxin and Sputnik V. It also gave approval to Indian pharma company Cipla on Tuesday to import Moderna vaccine, which has shown nearly 95% efficacy against Covid-19.

With the total case tally of more than 30 million, India is now only behind the United States which has reported over 33 million cases. With 18.4 million cases, Brazil is now at number three.

The country is also only the third in the world to record more than 300,000 deaths – behind the US and Brazil.

The government aims to vaccinate all Indians by the end of this year, but the drive has been hobbled by slow pace, shortage of doses and vaccine hesitancy.

Only 3.5% of the people have been fully vaccinated and 15% have received one dose since the beginning of the drive in January.

There are currently two homegrown vaccines for the coronavirus: Covishield and Covaxin. Russia’s Sputnik V has been also approved for use and is being used in some quantities.

When will the Covovax vaccine be available?

Last September, US pharmaceutical firm Novavax signed a deal with the SII to produce 2 billion doses of the vaccine.

SII’s chief executive officer Adar Poonwalla has said he hoped to launch the vaccine, known as Covovax in India, by September.

He said clinical trials of the vaccine are likely to conclude by November, but SII can apply for a licence before its completion on the basis of global data of the trial.

The Novavax jab, which is given in two doses, was shown to be 91% effective among volunteers at high risk of severe infection and 100% effective in preventing moderate and severe cases of Covid-19 in the US trials.

What about the second new vaccine?

The government has placed an order for 300 million doses of a coronavirus vaccine from Biological E, the first Indian private vaccine-making company.

The $206m (£145m) order is the first India has signed for a jab that has not received emergency approval. The vaccine has been developed in collaboration with US-based Dynavax and Baylor College of Medicine.

The unnamed vaccine is in the key third phase of clinical trials – the vaccine is given to thousands of people and tested for efficacy and safety – after showing “promising results” in the first two phases, the government said in a statement.

It said the new vaccine is “likely to be available in the next few months”.

In April, the government gave emergency approvals to vaccines already in use in other countries to “expand the basket of vaccines for domestic use and hasten the pace and coverage of vaccination”.

This means that vaccines made by Pfizer and Moderna could become available for Indians.

What do we know about Sputnik V?

The vaccine, developed by Moscow’s Gamaleya Institute, initially generated some controversy after being rolled out before the final trial data had been released. But scientists say its benefits have now been demonstrated.

It uses a cold-type virus, engineered to be harmless, as a carrier to deliver a small fragment of the coronavirus to the body. After being vaccinated, the body starts to produce antibodies especially tailored to the virus.

It can be stored at temperatures of between 2 and 8C degrees (a standard fridge is roughly 3-5C degrees) making it easier to transport and store.

But it has a different second dose

Unlike other similar vaccines, the Sputnik jab uses two slightly different versions of the vaccine for the first and the second dose – given 21 days apart.

They both target the coronavirus’s distinctive “spike”, but use different vectors – the neutralised virus that carries the spike to the body.

The idea is that using two different formulas boosts the immune system even more than using the same version twice – and may give longer-lasting protection.

Sputnik V has been approved so far in 60 countries, including Argentina, Palestinian territories, Venezuela, Hungary, UAE and Iran.

So what do we know about Covaxin?

Covaxin is an inactivated vaccine which means that it is made up of killed coronaviruses, making it safe to be injected into the body.

Bharat Biotech, a 24-year-old vaccine maker with a portfolio of 16 vaccines and exports to 123 countries, used a sample of the coronavirus, isolated by India’s National Institute of Virology.

When administered, immune cells can still recognise the dead virus, prompting the immune system to make antibodies against the pandemic virus.

The two doses are given four weeks apart. The vaccine can be stored at 2C to 8C.

The vaccine has an efficacy rate of 81%, preliminary data from its phase 3 trial shows.

India’s regulators gave the vaccine an emergency approval in January while the third phase of the trial was still underway, sparking scepticism and questions from experts.

What was the controversy around Covaxin?

It all began when the regulator in January said the vaccine had been approved for “restricted use in emergency situations in public interest as an abundant precaution, in clinical trial mode, especially in the context of infection by mutant strains”.

Experts wondered how a vaccine was cleared for emergency use by millions of vulnerable people when its trials were still underway. The All India Drug Action Network at the time said that it was “baffled to understand the scientific logic” to approve “an incompletely studied vaccine”.

Both the manufacturer and drug regulator had defended Covaxin, saying it was “safe and provides a robust immune response”.

Bharat Biotech had said that Indian clinical trial laws allowed “accelerated” authorisation for use of drugs after the second phase of trials for “unmet medical needs of serious and life-threatening diseases in the country”.

It has promised to make available the full data for third phase of trials in July.

The Oxford-AstraZeneca vaccine is being manufactured locally by SII.

The vaccine is made from a weakened version of a common cold virus (known as an adenovirus) from chimpanzees. It has been modified to look more like coronavirus – although it can’t cause illness.

When the vaccine is injected into a patient, it prompts the immune system to start making antibodies and primes it to attack any coronavirus infection.

The jab is administered in two doses given between four and 12 weeks apart. It can be safely stored at temperatures of 2C to 8C and can easily be delivered in existing health care settings such as doctors’ surgeries.

How effective is Covishield?

International clinical trials of the Oxford-AstraZeneca vaccine showed that when people were given a half dose and then a full dose, effectiveness hit 90%.

But there was not enough clear data to approve the half-dose, full-dose idea.

However, unpublished data suggests that leaving a longer gap between the first and second doses increases the overall effectiveness of the jab – in a sub-group given the vaccine this way it was found to be 70% effective after the first dose.

The SII, the Indian maker of the vaccine, says Covishield is “highly effective” and backed by phase III trial data from Brazil and United Kingdom. Clinical trials are a three-phased process to determine whether the vaccine induces good immune responses and whether it causes any unacceptable side-effects.

Any other vaccine candidates?

The other candidates which are in different stages of trials in India to test safety and efficacy include:

Which countries are signing up for India’s vaccines?

India has shipped 66 million doses of vaccines to 95 countries in Latin America, the Caribbean, Asia and Africa. The recipient countries include UK, Canada, Brazil and Mexico.

Both Covishield and Covaxin have been exported – some in the form of “gifts”, others in line with commercial agreements signed between the vaccine makers and the recipient nations, and the rest under the Covax scheme, which is led by the World Health Organization (WHO) and hopes to deliver more than two billion doses to people in 190 countries in less than a year.

But in March, India placed a temporary hold on all exports of the Oxford-AstraZeneca vaccine. The government said rising cases meant domestic demand was expected to pick up and so the doses were needed for India’s own rollout.