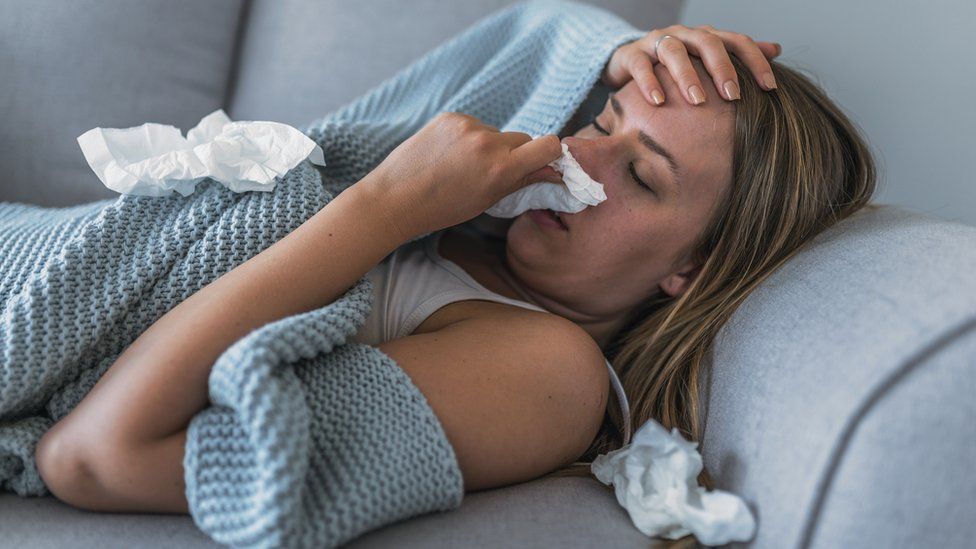 A surge in flu and other respiratory viruses could put pressure on people’s health and the NHS this winter, warns a report by leading medics.

They say testing for flu, Covid and a respiratory virus common in children and the elderly – called RSV – may help doctors treat cases more quickly.

The Academy of Medical Sciences report calls for people with any symptoms to isolate and stay at home.

This will help protect against all respiratory viruses this winter.

The report, by 29 leading experts and requested by the government, says there is great uncertainty about what the next few months will hold across the UK, but it urges policymakers to prepare for a challenging winter.

During lockdown last winter, the UK population was hardly exposed to the viruses which normally circulate. But they are now set to make a comeback as restrictions lift and society opens up.

But “we can’t completely rule out another winter wave”, she said.

“Whilst we expect the peak in deaths to be considerably lower than last winter, under some scenarios we could see hospital admissions rise to similar levels.”

In a worst-case scenario this could mean around twice the levels of flu and respiratory syncytial virus (RSV) as a normal autumn and winter, the report says.

There are between 10,000 and 30,000 deaths from flu in a normal winter, and about 20,000 children under five are admitted to hospital each year with RSV, which can cause a lung infection called bronchiolitis.

The authors say these viruses often produce similar symptoms, so testing for all three at once would help distinguish between them.

This could be done through Test and Trace or in GP practices, but the turnaround would need to be very fast so that anti-virals could be used to treat flu in the most vulnerable.

Dr Alexander Edwards, from the University of Reading, said the “triple tests” had “great appeal”, but the logistics could be a challenge.

“Whether there will be enough instruments and testing capacity available for this to be available widely in primary care remains to be seen,” he said.

The report also recommends booster Covid vaccines alongside flu vaccines this autumn to reduce the spread of the virus, which is already being planned by the NHS for the over-50s, and improving infection control in hospitals.

It says all adults need to be vaccinated against Covid by September. Currently, two-thirds of UK adults have received two doses and 87% have had one dose.

But the number one way to reduce transmission is for people to have a test when they have symptoms and stay at home if they are ill, says Prof Dame Anne Johnson, president of the Academy of Medical Sciences.

“We are calling on the government to urgently strengthen the financial and practical support that will allow all people to self-isolate if they need to, whatever their circumstances,” she said.

The medics also emphasise the importance of face coverings, social distancing and meeting friends outdoors – to protect against Covid as well as other respiratory viruses, as society opens up.