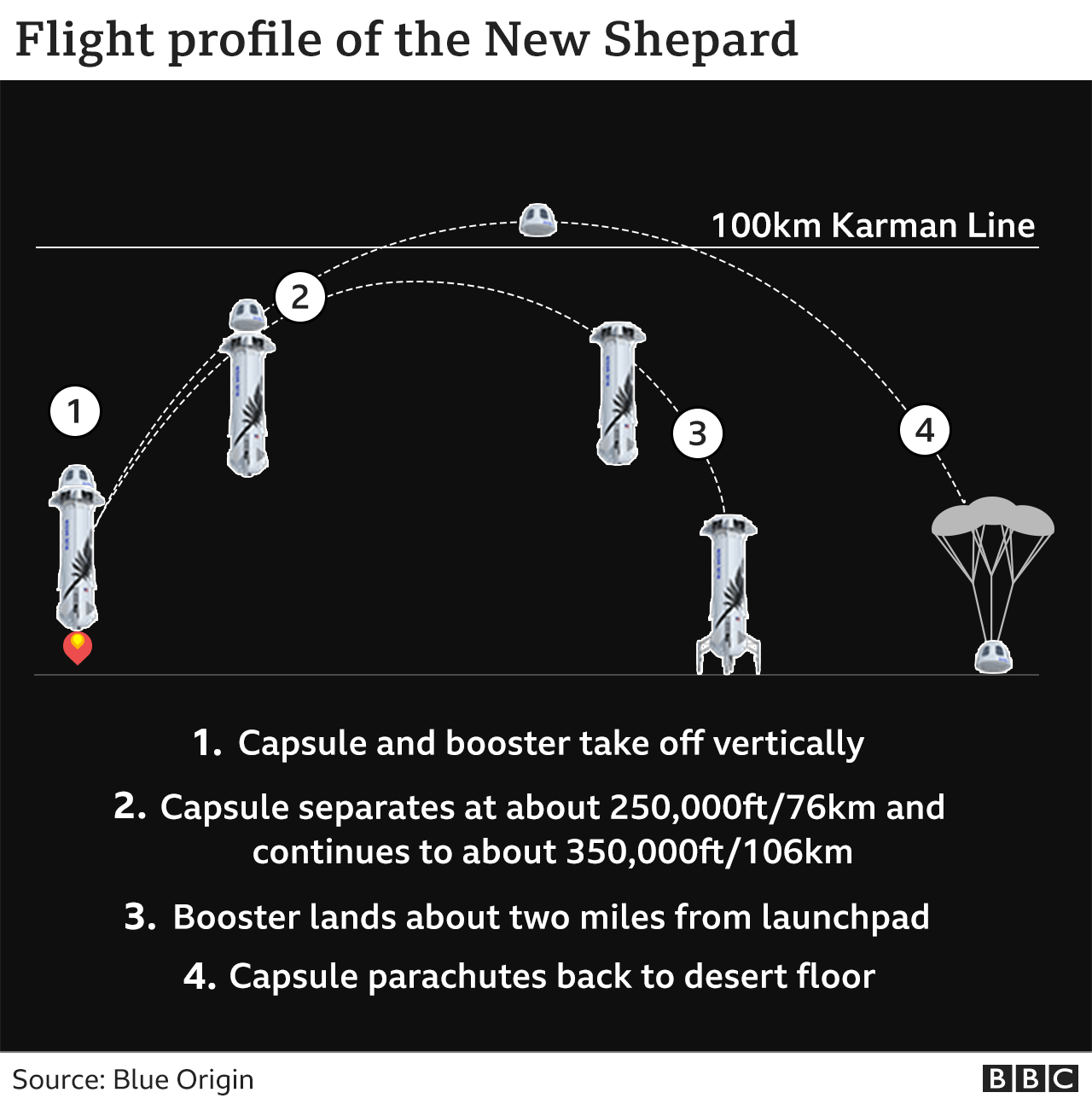 Billionaire Jeff Bezos will blast into space on Tuesday, in the first crewed flight of his rocket ship, New Shepard.

He will be accompanied by Mark Bezos, his brother, Wally Funk, an 82-year-old pioneer of the space race, and an 18-year-old paying customer.

They will travel in a capsule with the biggest windows flown into space, offering stunning views of the Earth.

“I’m excited. People keep asking me if I’m nervous. I’m not really nervous, I’m curious. I want to know what we’re going to learn,” Bezos said in an interview with CBS News.

“We’ve been training. This vehicle’s ready, this crew is ready, this team is amazing. We just feel really good about it.”

In the 1960s, Ms Funk was one member of a group of women called the Mercury 13, who underwent the same screening tests as male astronauts, but who never got to fly into space.

The capsule, containing the Bezos brothers, Funk and student Oliver Daemen, separates from its booster around 76km (250,000ft) up. The booster lands about 2 miles from the launch pad, while the capsule continues upwards to a maximum altitude of around 106km (350,000ft).

“We’re in zero-g for around four minutes, and we get to get out of our seats, unstrap, float around, look at the thin limb of the Earth’s atmosphere,” Bezos told CBS News.

“People who have been up – astronauts – say that when they do that, they can see that the Earth is so fragile.

“The views are going to be terrific, the zero-g will be an unusual experience that you really can’t get in any good way on Earth.”

The capsule then begins its descent, parachuting down to a soft landing in the desert.

The launch is the latest salvo in what has been dubbed the “billionaire space race”. It comes just nine days after Bezos’ space tourism rival, Sir Richard Branson, flew high above the Earth on his space plane on 11 July.

Though billed as an effort to expand access to space for all, seats aboard one of Sir Richard’s flights will initially set customers back $250,000, while the regular ticket price for a ride on New Shepard has not been announced.

With a net worth of around $200bn, Bezos is the world’s richest man. The 57-year-old recently resigned as chief executive of Amazon, the e-commerce giant he founded, to focus on special company initiatives and his other ventures such as Blue Origin.

The fourth passenger is the son of Joes Daemen, founder of Dutch private equity firm Somerset Capital Partners. Oliver replaced the anonymous winner of a public auction for the seat.

This unnamed winner, who paid $28m (£20m) for the ride on New Shepard, had to pull out “due to scheduling conflicts”.

Bezos and Branson have been on the receiving end of a social media backlash, with users arguing the money spent on private spaceflights could be put to better use – such as tackling climate change or helping the world recover from the pandemic.

Branson addressed the criticism on the Late Show with Stephen Colbert, saying: “I can understand it, but I think maybe they’re not fully educated to what space does for Earth.

“Space is connecting the millions of people who are not connected.” He added that satellites were monitoring “the degradation of the rainforests, monitoring food distribution – even things like climate change. These things are essential for people back here on Earth. We need more spaceships going up to space, we don’t need less.”